Humperdinck
Hansel and Gretel – Opera in three Acts to a libretto by Adelheid Wette after the Brothers Grimm [sung in an English translation by David Pountney; orchestral reduction by Derek J. Clark] 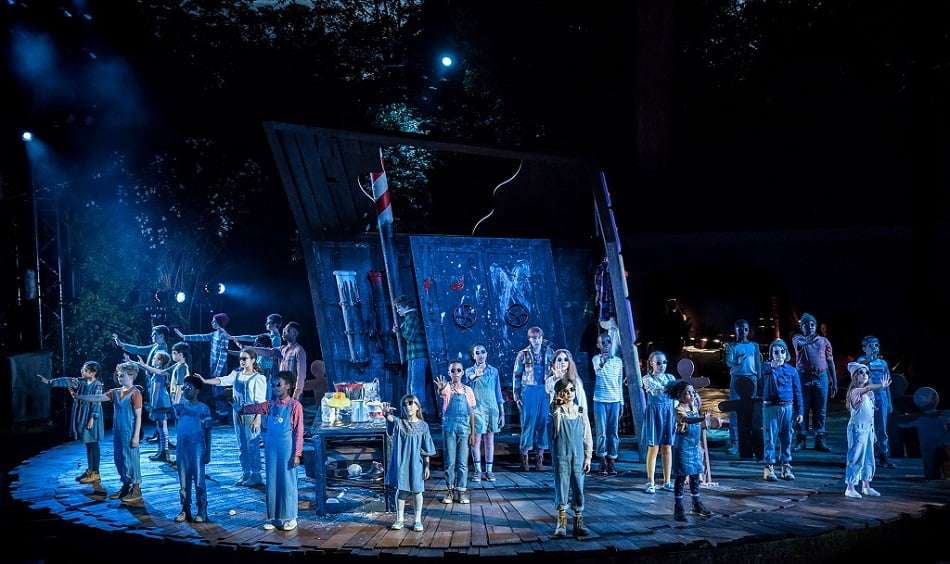 Notwithstanding my hay fever, this was a magical evening at Regent’s Park Open Air Theatre, the second collaboration between Timothy Sheader’s alfresco company and English National Opera following last year’s excellently received The Turn of the Screw. Humperdinck’s late-romantic Hansel and Gretel (first-conducted by Richard Strauss) may be a completely different soundworld to Benjamin Britten’s Henry James adaptation, but it is perhaps even more ideal for the wooded surrounds of this ever-delightful venue.

On an over-layered wooden slatted stage (revolving) stands a rickety wooden shack (lean to, in fact, as it leans alarmingly, if not onto anything). As the solitary horn opens the Overture, hollow-eyed bedraggled lost boys and girls with brooms sweep the stage before dropping bags of sweets. Suddenly a door opens from the hut and a mother comes out with two kids running on to the stage to be shoe-horned into their plaid shirts and sent off into the woods, picking up the sweets. Three pairs of kids interweave as the Overture takes its course, a sense of foreboding growing even though accompanied by Humperdinck’s soothing score.

Thus the scene is set. The stage revolves to reveal Susanna Hurrell’s pig-tailed Gretel and Rachel Kelly’s short-haired Hansel bemoaning (albeit in the most tuneful of ways; like Carmen, Hansel and Gretel is a sequence of hits) their hunger and boredom. As with all siblings, it soon turns to squabbling with a smashed bottle of milk the result, and an all-too-soon returning mother (Rosie Aldridge) to dole out the punishment, sending the children off into the forest to collect strawberries (or, here, various sweets, yet again laid by the lost children). Drunken father (a swaggering Duncan Rock), flush with success from selling all his brooms and wandering almost off-stage to relieve himself in the bushes, comes with a bag full of food. He sobers up when his wife tells him that she’s sent their children into the forest, and the pair of them head out into the darkening landscape to search for them, fearful of the stories about the witch. 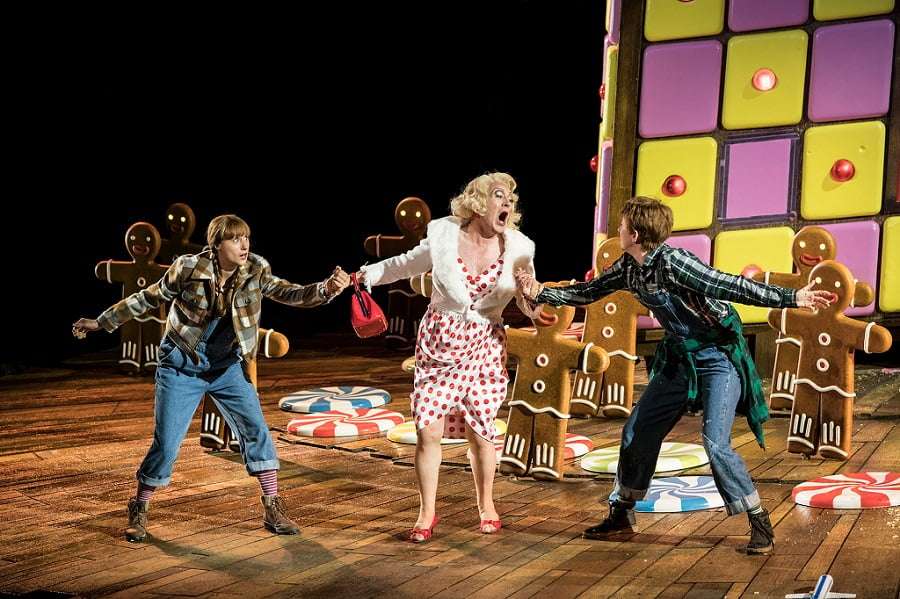 During ‘The Witches’ Ride’ Prelude to Act Two, the lost children dismantle the hut and ‘plant’ twenty-eight upended long-handled brooms across the stage to evoke the forest, dropping more sweets, this time for Hansel and Gretel to harvest and gorge on. As the shadows lengthen and the realisation kicks in that it’s too dark to find their way back, they grow tired and huddle together to fall asleep, aided by Gillian Keith’s diminutive, beige-suited Sandman, popping up to weave her magic spell for a restful dream.

Director Timothy Sheader here achieves an extraordinary flight of fancy, with Hansel’s model airliner that he’s carried with him the germ for a fourteen-strong air crew, all in white with blond hair and perfect smiles, to sweep down the aisles and onto the stage. From their white cases some take the paraphernalia (seat-belt, inflatable life-jacket) to do the pre-flight safety routine, others provide the children with in-flight meals as slumber takes them to end the Act, under the lights that have appeared in the broom-tree tops. It’s such an imaginative leap and so impeccably done that I immediately thought that every flight should use this music for their safety procedure. It represented just one of the myriad details in this production that marks it out.

Back from the interval and what were the bare bones of the lean-to are now covered in lurid Battenberg cake-style coloured squares, with a candy spiral chimney flue, a stepping-stone pathway made out of candy circles that light up and the broom-trees replaced by gingerbread men. But first three dew fairies, in vintage swing dresses carrying milk bottle holders, marked explicitly ‘dew’ armed with pipettes, leave tiny droplets on the sweets and sleeping children. They bring on a fourth dew fairy, He Wu, who gently sings the children awake. When Alasdair Elliott appears, Mrs Slocombe-like before removing the blonde wig and breast enhancers in the shape of iced buns with glace cherries on top, there is much fun to be had in the feeding up of caged Hansel (jelly and cream spread liberally around) and their heroic defeat of the Witch as they force her into the oven. When the children (from Pimlico Musical Foundation) are rescued from their gingerbread state (their blindness represented by sun glasses), they open the oven and take out a massive gingerbread man which they proceed to dismember and gorge on. 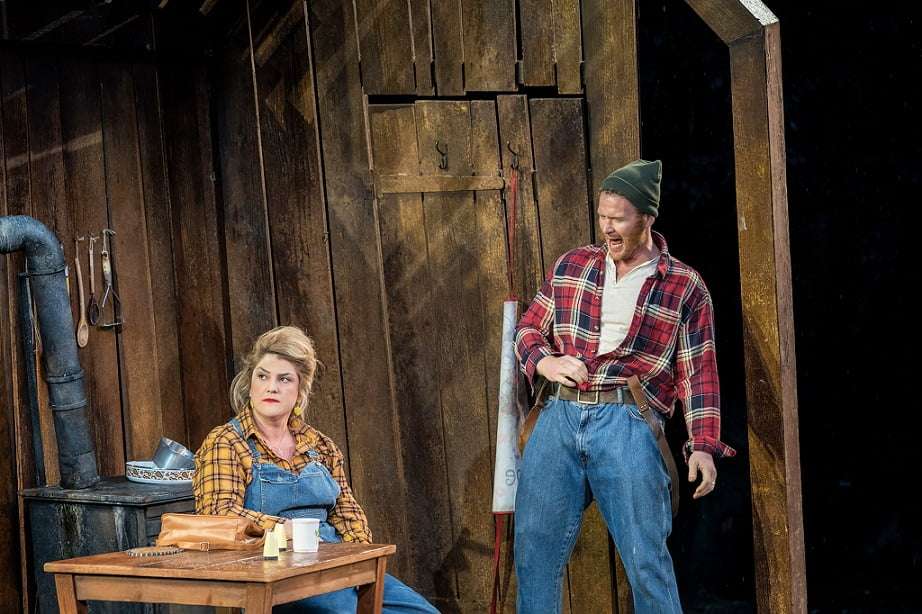 What a feast – musical and visual – with exemplary contributions from this first of two casts. Dungaree-ed Kelly and Hurrell blend perfectly not only in tone, but also in their witty evocation of children; Aldridge and Rock are believable as the flawed but essentially loving parents and Elliott is suitably grotesque as the witch. Although orchestra and voices are amplified, Nick Lidster’s sound projection is notably natural, and Derek J. Clark’s orchestral reduction to twenty players proved, in its amplified state, more than full-bodied, save only the final climax at the Witch’s demise. Ben Glassberg proves why Glyndebourne Touring Opera has been so astute in snapping him up as its new principal conductor; warmly sculpting Humperdinck’s gorgeous score.

Top marks to all the soloists for clarity of diction making the (albeit nice-to-have) printed libretto redundant, bringing to life David Pountney’s witty translation of Humperdinck’s sister’s original libretto. And top marks too to the members of Arts Educational Schools and London and Bird College Conservatoire for Dance and Musical Theatre, together making up the lost children and air crew.

I’d go so far as to say that Timothy Sheader’s Hansel and Gretel is a dream of a production, brilliantly designed by Peter McKintosh, and a feather in the cap of both Open Air Theatre and English National Opera. Continuing the woodland theme, Janáček’s The Cunning Little Vixen, perhaps?