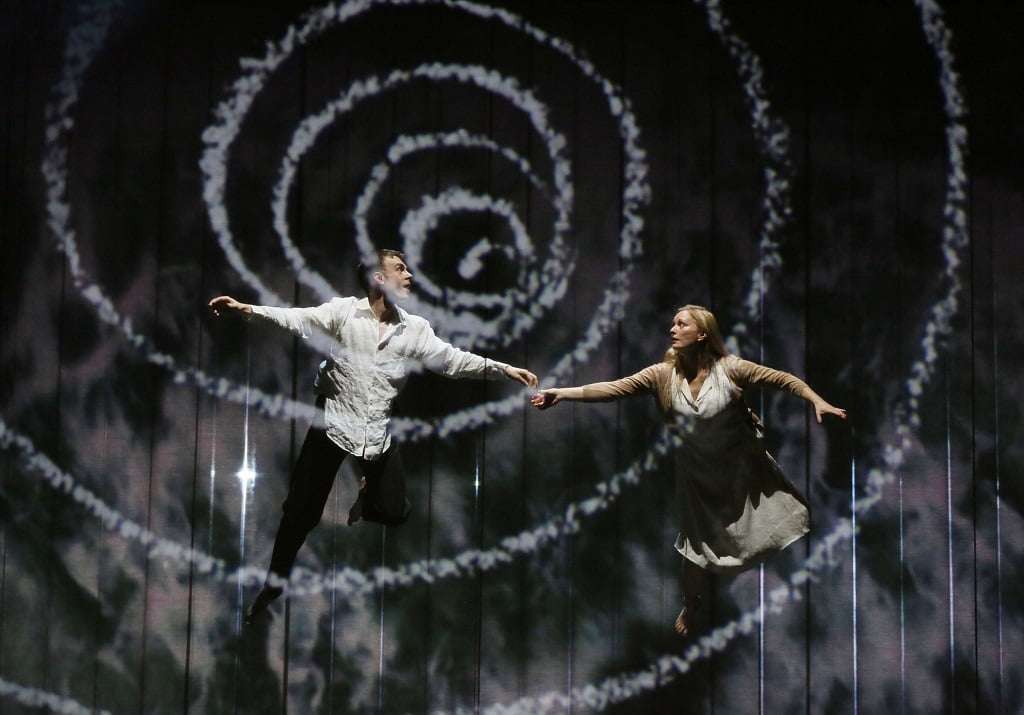 Simon McBurney’s production of Mozart’s The Magic Flute is quite the Gesamtkunstwerk, with the orchestra pit inclusively raised to the same level as the stage, and the players often taking part in the action, major roles for video-design and sound-effects, and much fourth-wall dissolution as characters barge on to the stage through the stalls while other roles get absorbed into the orchestra.

As you might expect from this Complicite director (who was looking after this second ENO revival), there is a lot of the company’s style of exaggerated characterisation and a reliance on directorial tics – for instance the chorus flapping bits of folded paper to suggest Papageno’s birds, or the hand-drawn signs and messages to the audience – that start off humorous and endearing but pall with repetition.

The industrial-chic set of a mobile, slate-grey platform that lifts and tilts is virtually the only thing on the Coliseum’s huge stage, and some of the video-work – for the Queen of the Night and for Tamino’s and Pamina’s trials – in its elemental way is gasp-inducing and very beautiful. The platform is often used in a way that reminds of the mysterious slab that appears throughout Kubrick’s film 2001, and the sound effects – drips, echoes and clunks – get close to the melodramatic dread of the Alien films. Once you get anywhere near the cinematic sci-fi groove, McBurney’s virtuoso high-techery and bold directorial gestures run with Mozart’s odd conflation of pantomime, myth and morality efficiently, leaving the opera’s built-in wonder and charm to fend for themselves.

The evening, though, never sags, particularly in the ninety-minute second Act, and some children nearby were fidget-free and clearly enthralled, as much, I suspect, by the visuals as by the music. But at the same time, you know that McBurney is trying to do all the thinking for you. 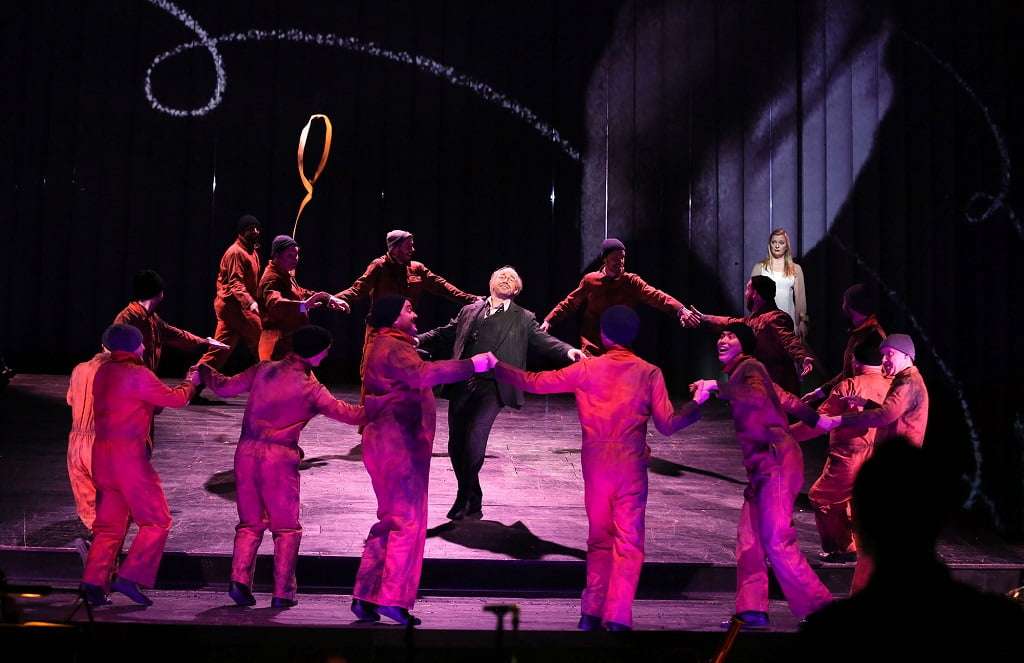 The young British conductor Ben Gurnon takes the fast section of the Overture at a terrific lick, which flags up a directorial zip that wasn’t there, but otherwise he does a marvellous job of injecting a considerable degree of flow and flexibility, communicated by some equally responsive and energised playing.

Thomas Oliemans is no stranger to this production via Dutch National Opera and is at idiomatic ease with the role in English. The staging tends to sit on Papageno’s humour and his use as a foil to Tamino, but his handsome baritone is forthright, even if he doesn’t get that many laughs. Rupert Charlesworth looks lofty and wholesome, even in his underwear, as Tamino, and only needs more sweetness and less tension at the top of his otherwise virile tenor to give the role the heroic lift it needs. Lucy Crowe hits the spot as Pamina, flooding the theatre with generous tone, decisively leading the ensembles and beefing up the urgency of Pamina’s love for Tamino.

I had forgotten that McBurney consigns the Queen of the Night to a wheelchair, a directorial cliché I haven’t seen for years. Julia Bauer sings her two arias with style and not much power and barely registers as a commanding, wicked presence. Brindley Sherratt, however, is in total command as Sarastro, cast here as the president of some big American company. Daniel Norman is great as a priapic, increasingly unhygienic Monastatos; you will be spooked by the Three Boys presented as wise, very old men; Jonathan Lemalu is in sonorous voice as the Speaker and Rowan Pierce is a hugely engaging Papagena. During the interval I overheard someone saying how much she missed the Nicholas Hytner production, but you can’t deny McBurney tries hard to fill the space.