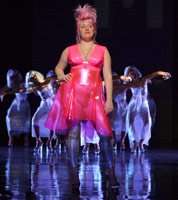 Things have not been going too well for English National Opera lately: its recent productions of “Gaddafi”, “Kismet” and “Carmen”, for example, yet the successful “The Magic Flute” is being retired, unnecessarily.

Further problems with “The Coronation of Poppea”. One admired the music-making but despaired at the staging, which is so intrusive as to be annoying and distracting – a symptom of a director who dominates the music to its detriment. And, as with “Carmen”, there are off-putting dancers parading their way through the set, seemingly trying to impersonate the emotions of the sung words. This robs the singing of any impact, as it breaks the concentration of the listener, but it is also insulting to the viewer’s intelligence. The three acts that make up the opera in its usual format were dispensed with and instead we had Parts One and Two. Part One ended about halfway through Act Two, where, just after Seneca’s suicide, Nero joins his friend Lucano in praising Poppea’s beauty.

The set is bewildering. It consists of a reflective floor and, in Part One, a diving board to the left of the stage. In Part Two, this was angled down and resembled a gangway. The back-wall was used for that gimmick that has now become de rigueur in opera: computer-generated images that swirl and are which are nauseating in their kaleidoscopic effect. In Part Two the light bulb in the projector must have failed as the images disappeared. Good news: one could concentrate on the singing rather than being distracted – the projections added nothing to the story.

There is not a hint of anything Roman, other than the characters’ names. The action has been transported to a Technicolor world of competing supermodels – Fortune, Virtue and Love – another dated idea. Other oddities were the nurse (Arnalta) and confidante to Poppea being a man dressed in a nurse’s uniform. Kinky! Amongst the ‘additions’ were rolling balls that would wander across the stage and a radio-controlled something-or-other that buzzed its way along, bumping in to characters; crass distractions: “how dare the director distract the audience from the beautiful music making”. 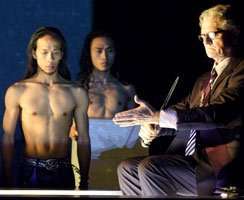 Robert Lloyd’s philosopher Seneca is a standout. His authoritative bass voice was warm and thoughtful, giving weight to the guidance he proffers to Nero. His suicide was stately, not the horrible mess that it really was, but having Valletto and Damigella make love in Seneca’s suicide bath whilst Seneca’s body lies in it tells more about the director. The many duets between Poppea and Nerone were ravishing if one could force oneself to concentrate on them. Too often they were interrupted by Christopher Gillett’s ‘drag act’, which was interminably dull, and almost ruined the final coronation duet between Nero and Poppea. Countertenor Tim Mead’s sounds were not pure, and his own ‘drag act’ wore thin quickly, too. The rest was all rather forgettable. Characters come and go, with no identification possible – so that one did not care for them.

The music and its attribution to Monteverdi is not as it seems, given that there is no autograph score. A scenario of the first performance exists and there is a libretto in an edition by Busenello (Venice, 1656). The music survives in two sources: one in Naples and one in Venice. This performance opted for the latter source, and had the ENO Orchestra adopting baroque bows and gut strings. Peter Holman’s five-part (rather than two-part) arrangement of the original bass lines is a welcome innovation and, at the top of Act Two, is the Sinfonia from Cavalli’s “L’Ormindo”, wholly appropriate as it seems likely that Cavalli was a collaborator on the original score. There were natural trumpets in the coronation, too. The effect of all of this provided the appropriate associations between music and drama, though Laurence Cummings would not have done a disservice had he upped the tempo slightly.