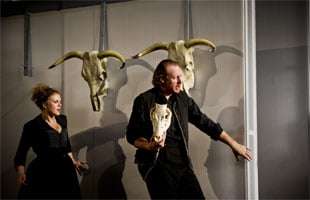 Yet again actress Fiona Shaw brings sure theatricality to directing opera. Her previous ENO productions – at The Coliseum (Vaughan Williams’s Riders to the Sea) and at the Young Vic (Henze’s Elegy for Young Lovers) – were both gripping as drama and she has the knack of eliciting strong and striking performances from singers. Those previous assignments were both works that sit outside the core repertoire. Now, let loose on Mozart’s familiar if ever-fascinating The Marriage of Figaro, she provides a refreshing reappraisal of it that is a great success. Instead of sticking resolutely to Figaro and Susanna’s new quarters, the Countess’s boudoir, and so on, a cleverly revolving labyrinthine set manages to move the action around the Almaviva residence to show us the busy household, full of intrigue, as listeners and observers. Keeping these restless characters on the move gives the action tremendous pace. The potentially predictable snide encounter of Susanna and Marcellina in Act One is one such instance – they carry their dispute through hallways, kitchen, laundry room, and elsewhere, watched keenly by onlookers; there’s an acute sense of space and boundary at play. Peter McKintosh deserves credit for these great designs. 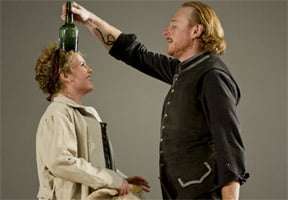 Shaw also brings some fun to proceedings – each half of the evening starts with a nice visual gag (but could it become wearing on repetition?), and the comings and goings of the second Act have a sure-footedness that surely derives from Shaw’s knowledge of playwrights such as Marivaux. Not all the ideas work perfectly. For example having Don Basilio as a visually impaired character removes some of his potential malevolence; likewise Barbarina’s over-confidence did not entirely convince. This is quibbling though, for the humour was there in abundance, as was the emotional seriousness and undercurrent of revolution-in-waiting (though the video projections laboured this slightly). 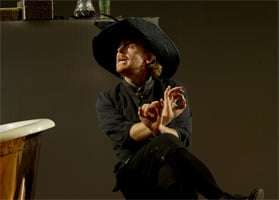 The singers really helped. Iain Paterson was a solid and slightly angry Figaro – not always the genial charmer. It was a nice touch to be reminded of his origins as “the Barber”. Paterson sang well, with character, and with superb diction. Every word of Jeremy Sams’s amusing translation he uttered was audible. His feisty Susanna, Devon Guthrie, captured her character’s volatile mood-swings well, as well as her cunning and humour. Vocally she was slightly lightweight, but these two certainly enjoyed meaningful interplay. The aristocratic couple were also strong here. Roland Wood’s sappy baritone was heard to advantage. His Count was persuasive in both ardour and fury; he too inflected the text with point. Kate Valentine was to have been the Countess, but she afflicted with a chest infection. On the morning Elizabeth Llewellyn gamely stepped in and caused something of a sensation with her warm yet plaintive tone, beautiful embellishments of line and a searing depiction of this unhappy character’s emotional plight. There was wit, too. Her two arias were both high-points. Add some sterling support from Kathryn Rudge as a troubled Cherubino, Lucy Schaufer as a wiry Marcellina and Messrs Best, Robinson and Lamb as the intriguers Bartolo, Basilio and Antonio and you have a cast of depth.

In the pit the ENO orchestra produced some vivacious playing with Paul Daniel (accompanying deftly on fortepiano for the recitatives) leading a pretty fleet account of the score – the ‘Letter Duet’ and the Countess’s second aria notably so. Mozart’s atmospheric writing for the nocturnal final act was charmingly realised and there was some lovely woodwind playing throughout. This is a fun evening in the theatre.