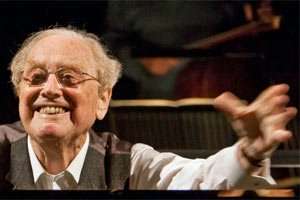 A revival of David McVicar’s provocatively ambiguous and unsettling production of “The Turn of the Screw” was keenly anticipated and the presence of Sir Charles Mackerras conducting was another lure. That he last conducted the work in London over 50 years ago is extraordinary, and his reading is, as might be anticipated, full of colour and attuned to the moods McVicar and collaborators have created.

On this second-night performance, Mackerras’s lead made some passages extremely memorable – evoking a powerful, almost heady atmosphere and sense of everything being happy and idyllic in the sultry summer at Bly, despite Miles having been expelled from his school, until the heat dissipated rapidly when The Governess first sees or perceives the ‘presence’ of Peter Quint. The reading and orchestral performance was full-blooded; the rhythmic underpinning of passages like the “Tom, Tom, the piper’s son” was invigorating and rather loud, and the ringing of the bells switched from being joyously reassuring to being threatening in an instant; when needed there were moments of exquisite stillness (sadly punctuated by some rather intrusive coughs) and the orchestral musicians all shone in their moments in the spotlight – though mention must be made of the stylish harp-playing of Alison Martin and Anthony Lamb’s wonderful clarinet solos. 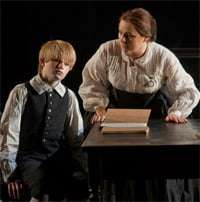 The cast is well matched and believable. Rebecca Evans returned to reprise her detailed reading of The Governess, suggesting first her eagerness for her assignment, hinting strongly that the young teacher’s motivation to accept her job was triggered by attraction to the children’s guardian. She also charted unerringly her gradual increased anxiety and loss of confidence, particularly when rejected by Flora. The sense that the character might also be emotionally attracted to young Miles also came across. Evans has an expressive face and eyes that can project smiles or register panic very effectively across the footlights. She is also wonderfully warm of voice, right to the extreme high registers of the part. Like all members of the cast her diction is excellent.

Ann Murray is an excellent Mrs Grose, and she captured the growing ambivalence of attitude of the housekeeper towards The Governess well. In the roles of the children there is some exceptionally strong casting. Nazan Fikret’s headstrong gawky Flora is a distinct asset. It was hard to take one’s eyes off her as Miles started to sing the “Malo, Malo” song; her discomfort was very unsettling indeed. Hugh Beckwith is a tall, blond and angelic-voiced Miles, his reserve making the dramatic portrayal very truthful.

Michael Colvin is excellent in The Prologue – every word carefully pointed – and his Peter Quint was menacing because of its understatement. The way his calls to Miles insinuated themselves into the accompanying orchestral textures were perfectly judged. Cheryl Barker’s dramatic and penetrating tones were ideal for the wronged, desperate and rather scary Miss Jessel, and an effective counterpoint to Colvin’s Quint.

The staging is very atmospheric. I like the way the characters are surrounded by a group of servants who move props and scenery around and retain a presence until the very end. Their silent presence enhances the claustrophobia. I also like the way McVicar does not impose an interpretation of what unfolds but allows the members of the audience to make up their own mind and to make their own judgements on matters suggested by the events and actions. That’s very true to Henry James’s novella, and to Britten’s wishes. Mackerras’s potent interpretation adds that final twist.