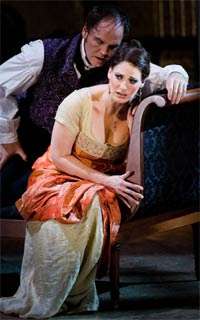 English National Opera’s new production of Puccini’s “Tosca” is directed by a widely-acclaimed veteran of the title role, Catherine Malfitano. She brings her experience to bear in a sensitive interpretation that shows instinctive understanding of Puccini’s score, and which contributed immeasurably to the terrific success of the performance.

Though essentially traditional, there is no hint of staleness to Malfitano’s production. Every moment of the drama is brought to life enthrallingly – a remarkable achievement with such a familiar opera. The acute passion and emotion genuinely hit home, often painfully so. The skin crawled as Scarpia leaves a distraught Tosca no choice but to give him the sexual gratification he craves – a scene that bristled brilliantly with truly repulsive dirtiness; Cavarodossi’s torture, though off-stage, was palm-sweatingly vivid. Though we know the joyous hope expressed by the lovers at the start of Act Three is false, such is their overwhelming conviction we could almost believe things might turn out differently this time. The tragic dénouement carries all the more weight; Tosca’s final, desperate act of defiance, hurling herself from the battlements, has never been so shocking – or looked so convincing. 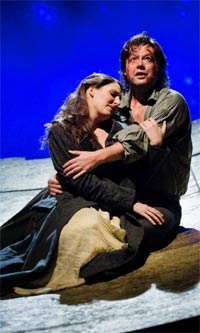 Credit for the intensity of the performance is due equally to an outstanding trio of principals. Having first caused a stir in the title role at Opera Holland Park in 2008, Amanda Echalaz here confirms that her Tosca reigns supreme. Every aspect of this complex character – Mediterranean fire, allure, girlish playfulness, womanly grace, vulnerability, determination and much more – is conveyed with compelling force. And she has the voice to match, powerful with radiant tone; her poignant ‘Visi d’arte’ was mesmerising. Echalaz is well-partnered in Julian Gavin, whose richly baritonal tenor voice and dynamic bearing make a sympathetic hero of the firebrand Cavaradossi. Superb bass Anthony Michaels-Moore excels as Scarpia – with his malignant cocksure, hubristic love of power and, beneath it all, shabby seediness, is a million miles away from the pantomime villain the role can sometimes become.

The ENO Orchestra was on terrific form under Edward Gardner, who displayed once again his immense flair and affinity for this repertoire. Sumptuous string-tone made the yearning melodic outburst that follows Tosca’s murder of Scarpia especially heart-rending.

The one major departure from tradition, though no less impressive, was Act Three: the vast tunnelled-roof turret and magical backdrop of a constellation-strewn star-scape recalled the other-worldliness of Glyndebourne’s wonderful “Tristan und Isolde”. One of the production’s most striking images is the tableau created by the group of cigarette-puffing guards as they gaze, spellbound, out into the heavens. Though beautiful, this vast celestial panoply served as a looming reminder of destiny, of inevitable tragedy. Another powerful picture is formed at the culmination of the spine-tingling Act One ‘Te Deum’ sequence, when the huge train of the priest, his back facing the audience, is unfurled to create a swathe of angry scarlet amidst the drabness of the congregation.

Though sung in English, many of the words were indecipherable throughout – a minor point, perhaps, when the singing was of such a high calibre and there are, in any case, surtitles. But it does beg the question: why not abandon pretence and sing in the original language? It certainly didn’t impinge on the evening, however. The genius of Puccini shines out afresh in this new “Tosca”, which is an outright triumph. This production should have a long future.