Nico Muhly
Marnie – Opera in two Acts to a libretto by Nicholas Wright after the novel by Winston Graham [sung in English, with English surtitles; world premiere] 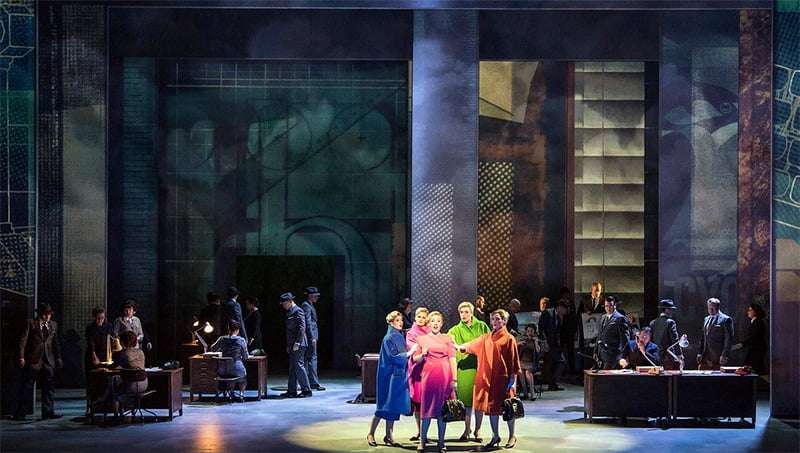 The American composer Nico Muhly has, he says, gone out of his way to exorcise any influence of the film of Marnie on his new opera, its world premiere here from ENO. Muhly, though, could have taken some tips from Alfred Hitchcock in terms of dramatic pacing. Both Winston Graham’s 1961 novel and the 1964 film are gifts to an opera composer. Marnie, damaged goods from childhood at the hands of a feckless mother, becomes a tormented, kleptomaniac wraith repelled by the thought of sexual intimacy, who compulsively steals money from her employers before moving on to another town, a new identity and yet more lies, and who meets her match in the handsome, lonely young widower Mark Rutland who, while almost destroyed by his love for her when he blackmails her into marrying him, triggers her rehabilitation.

The deceptions, the expressing one thing while meaning something quite different, the strange logic of a warped mind, the melancholy of chaos and isolation, are the stuff of the stage. Muhly’s vocal lines and melodic gestures tend to sound the same in their generic angular lyricism – the only memorable tune is the Anglican hymn sung at Marnie’s mother’s funeral – and it would need many more hearings to take in the corrective ‘truths’ emanating from the orchestral accompaniment. There is much American-style minimalism in the score, with passages of Britten-like declamation and exposition, as there was in his previous opera Two Boys (premiered by ENO in 2011), to which you can add a floating-world Debussyian impressionism for the elusive Marnie. The writing is often very atmospheric and Muhly is a gifted orchestrator, but, in the first half particularly, it lacks pace and tension.Marnie’s multi-purpose initials M. H. for her many identities remind of E. M. (Emilia Marty) in The Makropulos Case, and thinking of Janáček’s sympathy for his tragic anti-heroines and his powers of character illumination only suggested how inflated Muhly’s piece is, despite Nicholas Wright’s compression of the novel. Aspects of Michael Mayer’s opulent production – a close-harmony quartet of Shadow Marnies, who externalise Marnie’s psychosis, a troupe of sharp-suited male dancers who add their own turmoil (and shift scenery) and a large chorus for the scenes in the office, the country club and at the hunt – become distractions once you’ve got the point of them, and the two leads’ soliloquies when they step out of the story to explain their motivations put the brakes on the action. Both Acts are seventy minutes long and feel longer.

Muhly and Wright’s version returns the story to its original setting in home-counties England, as well as keeping the open-ended conclusion, when the law catches up with Marnie and she sings “I’m free” as a policeman handcuffs her. You would, however, hardly recognise Buckinghamshire in the glamorous, New York-style set by Julian Crouch, the equally imposing projections by 59 Productions and the chic 1950s’ gowns and dresses by Arianne Phillips. Visually, it won’t be remotely alien to New York’s Met audiences when it is staged there, although they might not get the references to towns like Barnet, Bournemouth and Hove, where Marnie has been helping herself to the contents of her employers’ safes.

They will, though, feel at home with the North American accents of the two leads, Sasha Cooke and Daniel Okulitch. Cooke has the detached, ice-maiden mystery of Marnie, although she is dwarfed by the staging. She was at her best at the start of Act Two (by far the stronger) when her music gets nearest to a direct emotional onslaught and Muhly’s careful scoring never obliterates her vocal line and diction. Okulitch’s handsome bass-baritone is much nearer the mark in sympathising with Mark’s baffled frustration, and his explosion into his attempted rape is very convincing, even if let down by Marnie’s unconvincing subsequent suicide attempt.

Mark’s brother Terry is cast as a countertenor, which adds no special insight into the role. I suppose James Laing’s insinuating singing singled Terry out as a rotter, and his later good-guy transformation has enough features to work. As their hard-boiled tigress mother, Lesley Garrett has enough style and presence to make up for vocal volume, and there are strong cameos from Alasdair Elliott (Mr Strutt, who was robbed by Marnie and who inadvertently brings her and Mark together) and from Diana Montague as Lucy (Marnie’s mother’s neighbour). I felt sorry for William Brady’s Little Boy (who runs errands for Marnie’s ma), who has some difficult music to negotiate. Martyn Brabbins, ENO’s new musical broom, draws playing with a breadth of detail and sonority and he keeps a close and fluent rapport with the cast. Marnie’s music-generating potential is undeniable, but Muhly hasn’t quite distilled her tragedy and detachment.