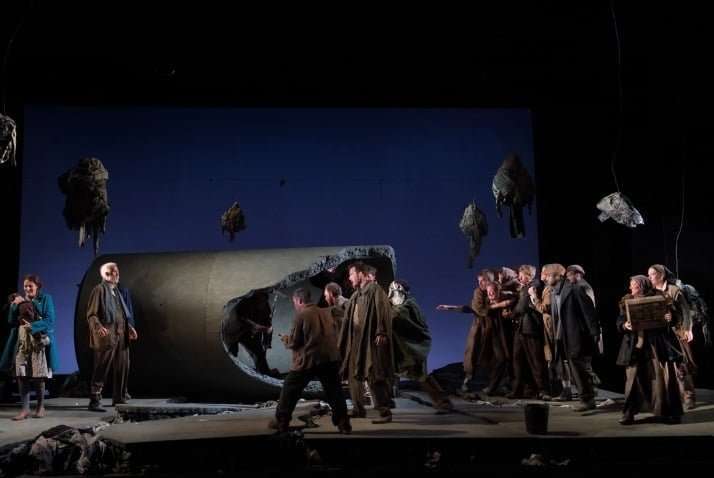 Donizetti’s relatively neglected L’assedio di Calais (The Siege of Calais) has done well at this end of Europe, with productions at Wexford (1991) and the Guildhall School of Music (1993 and 2009), and this English Touring Opera revival, the UK’s first professional staging in many a decade first mounted for ETO’s spring tour in 2013.

The listing describes the opera as being in two Acts, but this historical melodrama about King Edward III’s siege of Calais in 1347 started out with three (including a ballet). The final Act gave Donizetti a lot of grief. James Conway has persuasively enlarged on this anguish by not only giving the opera a tragic end – it’s not a spoiler to say that the six Burghers of Calais, who adopt the poses of Rodin’s famous sculpture right at the end, are not spared as in Donizetti’s original but fulfil the sacrifice demanded by the evil English monarch – but he’s also transferred a chunk of Edoardo III’s music from the third to the first Act. 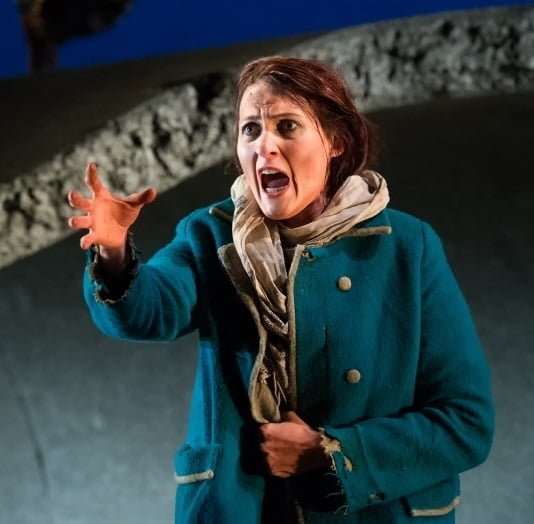 Then, to give it a contemporary ‘relevance’, Conway has shifted the action from Calais in 1347 to Stalingrad in 1943, and the synopsis deepens the process of displacement by avoiding mention of French Calais or English king. Once again, it’s history, but not as we know it. Directors play as fast and loose with time-travel as Doctor Who, and here it works, mainly because of the detail of Conway’s direction, although I still think it’s possible to imagine siege and famine no matter what the century. Samal Blak’s set – a damaged section of a concrete tunnel that serves as the outer wall of the city and then revolves to form a shelter for the besieged citizens, and some unidentifiable clumps of stuff hanging in the air – shout squalor and deprivation.

This opera comes soon after Lucia di Lammermoor, in which Donizetti hit his emotional stride, and is a sequence of intense, tight ensembles and arias. For those who think that Donizetti can sound written by the yard, this score has many moments of romantic heroism and stature, and Jeremy Silver has a marvellous way of getting beneath the skin of the music, shaping the various numbers so that their impact has space to sink in before moving on the next turn of the melodramatic screw. In general, musical values were very high – the ETO Orchestra had an instinctive feel for the gutsy, bright, volatile sound, played with Italianate vigour. With the chorus singing with the same sort of attack, the beleaguered people’s fervent love of country came across with thrilling directness.

The lead roles are strongly cast, dominated equally by Craig Smith’s Eustacio and Catherine Carby’s Aurelio, a trouser-role and the hero of the opera. Smith’s baritone combined breadth and dignity with carefully phrased mobility of tone, and Carby was at ease with the intricacies of bel canto demands and her acting was eloquently emotional throughout. Andrew Glover’s attractive, lyric tenor quickly established the character of Aurelio’s friend Giovanni, Paula Sides was a neatly sung, sympathetic Eleonora (with a bundle of rags, her and Aurelio’s son, that occasionally delivered a verismo baby wail), and I much liked Peter Brathwaite’s spirited Stranger, very much in the bel canto spirit. In the smaller role of Edoardo, Grant Doyle carried the first scene, although the role’s supposed wickedness was overplayed, probably to justify moving some of his music to the front, and sung with his customary power; and Edoardo’s captain Edmondo was impressively sung by the tenor Ronan Busfield.