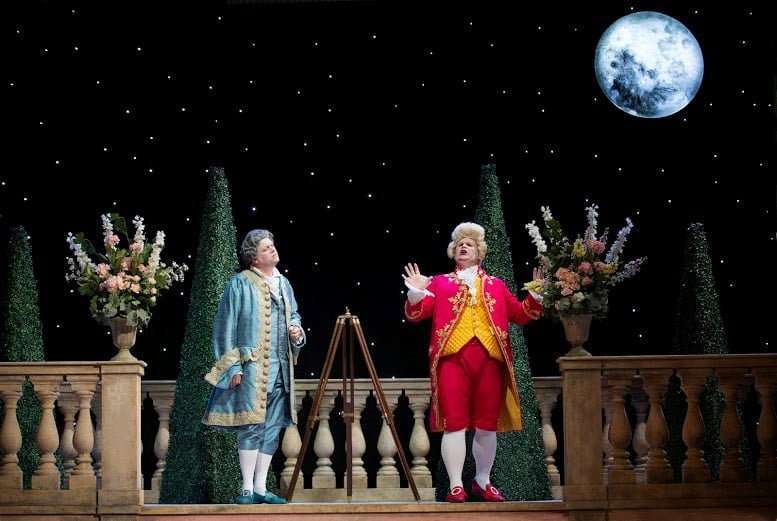 Joseph Haydn’s operas still lurk stubbornly on the fringes of the repertory, berated for formulaic characterisation and so-so dramatic propulsion. Il mondo della luna (“Life on the Moon” in English Touring Opera’s new season-opening staging) has probably come nearest to making it into the big time. Yet, however attractive the arias, they are not terribly memorable, and some startling orchestral passages point up the fact that Haydn, unlike Mozart but like Beethoven, didn’t rate the human voice as a prime compositional resource.

Bearing these perennial Haydn-and-opera reservations in mind, director Cal McCrystal (physical comedy director on One Man, Two Guvnors, based on Goldoni who provided Haydn with his libretto) and designer takis (sic) have pushed “Life on the Moon” into a maelstrom of fantasy action, which makes the distractions visited upon some high-Baroque opera productions seem tame in comparison. But what else can a director do with such a daft plot, along with dropping one love interest, two characters and about 30 minutes of music, pressed into two hour-long Acts instead of the original’s three. 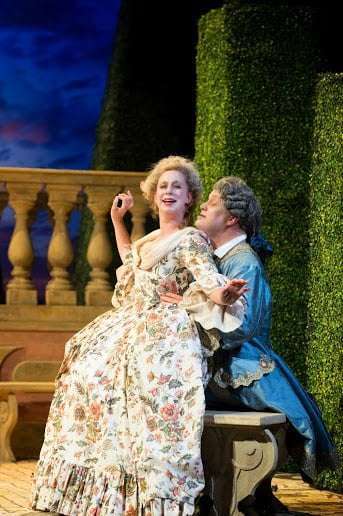 This is sturdy buffo tosh, with a send-up of Enlightenment-posing served on the side. Rich, old skinflint Buonafede wants to ‘save’ his daughter Clarice from marriage to ‘protect’ her dowry. Clarice’s wooer Eclittico, a would-be astronomer, tricks Buonafede (via a magic potion) into thinking he’s flown to the Moon. He may as well be in Heaven, having spied through Eclittico’s telescope some of the Moon-folks’ saucy capers, available to all lechers, especially older ones, has been summoned there by the Emperor of the Moon (Cecco, Eclittico’s servant in love with Lisette, Clarice’s maid, in disguise). Once on the ‘Moon’, Buonafede is relieved of his treasure and is enthusiastically candid about his kinky predilections, so when the two Moon-folk couples marry then reveal their deception, he is out-manoeuvred.

Set and costumes, by takis, are very stylish – a classical garden on Earth that converts into a white Moonscape under a black, starry sky, big frocks and wigs, skimpy lunar attire, and amazing outfits for Clarice disguised as a bearded-lady star and for Cecco as a cheeky-chappy Emperor. As you’d expect from this director, the visual gags come thick and fast, bosoms heave, codpieces strain, deliciously puerile innuendo abounds, and there is always something bizarre to look at – and it’s all set to music. Surtitles would have clarified some of the more baffling aspects of Moon-life – the birds, for example – but in the general mix it doesn’t matter.

Andrew Slater’s extravagantly pervy Buonafede was in a persistent outraged state, his fine baritone firm and his diction clear. Christopher Turner put his handsome tenor to elegant use as Eclittico, and sent up his G&S-inflected acting very knowingly. Ronan Busfield’s Cecco was nothing if not consistently bumptious, resistance to which was futile and anyway leavened by his light, English-sounding tenor – it’s the strongest role and he played it to the hilt. There was a deal more comic subtlety in Lisette as played by Martha Jones, whose warm, sinuous mezzo is alone worth the price of a ticket. Jane Harringon’s came on with all Bette Midler guns blazing and didn’t let up the whole evening – fearsome, funny coloratura and saturation high-camp energy.Christopher Bucknall, drawing an attractive Dorati-style sound from the period Old Street Band, never let Haydn’s merrily chuntering music sag. His comedy diverted the Esterhazy court in 1777 and, judging from its reception in Hackney, looks set to do the same on its tour of England.