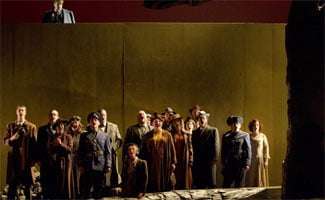 Mozart’s penultimate opera “La clemenza di Tito” should be required viewing for all leaders, especially despots – it was salutary to witness the Roman Emperor Titus agonising over the first death-warrant for one of his cherished citizens that is put before him.

The first of Mozart’s operas to be performed in London, “La clemenza di Tito” was, for the first half of the 19th-century at least, overwhelmingly his most popular. In more recent times it has fallen from favour, gathering a reputation for being dull and static. English Touring Opera’s production roundly dispels that view. Those expecting the vivaciousness of “The Marriage of Figaro” or exuberance of “Cosi fan tutte” may still be disappointed; but, thanks to superb acting from a strong cast, and the singers’ excellent diction which conveyed every word of Andrew Porter’s masterful English translation, “La clemenza di Tito” here comes to life as it has rarely done before. 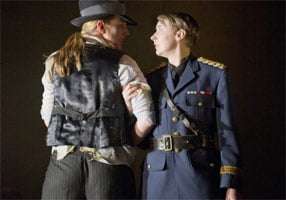 Metastasio’s libretto was first set in 1734, well over half-a-century earlier, at a time when opera was less dramatically direct. But, as with his Da Ponte settings, Mozart manages to bring out the human emotions with uncanny skill. This opera is all about relationships, and their acute complexities were communicated powerfully by the ETO cast to create a compelling psychological tale.

Mark Wilde’s plausibly human account of the title role was a welcome change from the po-faced righteousness with which it is often treated, helped by his naturally warm demeanour and attractive edge-free voice. Julia Riley, with convincingly masculine stature and heartfelt anguish, was commanding in the trouser-role of Sesto, Titus’s friend who misguidedly betrays the Emperor for love. Gillian Ramm brought out the deviousness of Vitellia with impassioned force.

“La clemenza di Tito” brims with some of Mozart’s most sublime music. Of especial note are the two tour de force arias featuring obbligato clarinet/basset horn – performed with virtuosic brilliance by Mark Simmons and Helen Bishop. Richard Lewis kept things moving at a lively pace and coaxed admirably crisp articulation from the superb orchestra. Two or three numbers were disconcertingly frantic, however, and some of the more fluid arias lacked a solid pulse. At least ETO has stretched its budget to a genuine harpsichord (the recitatives of last year’s ‘Figaro’ were accompanied on an electronic keyboard!). The instrument was played with assured confidence by Timothy Carey; for top marks, however, the company should have opted for a more historically correct fortepiano, capable of pianistic flourishes that would have further enhanced the drama of the recitatives.

James Conway has set the production in the 1940s, with Neil Irish’s minimalist sets imparting a strong Soviet vibe. Neither offers any groundbreaking insights, but both work well and – crucially – do not detract from the opera. A real treat for Mozart-lovers, this captivating “La clemenza di Tito”, about to set off on a UK-wide tour, is a triumph.