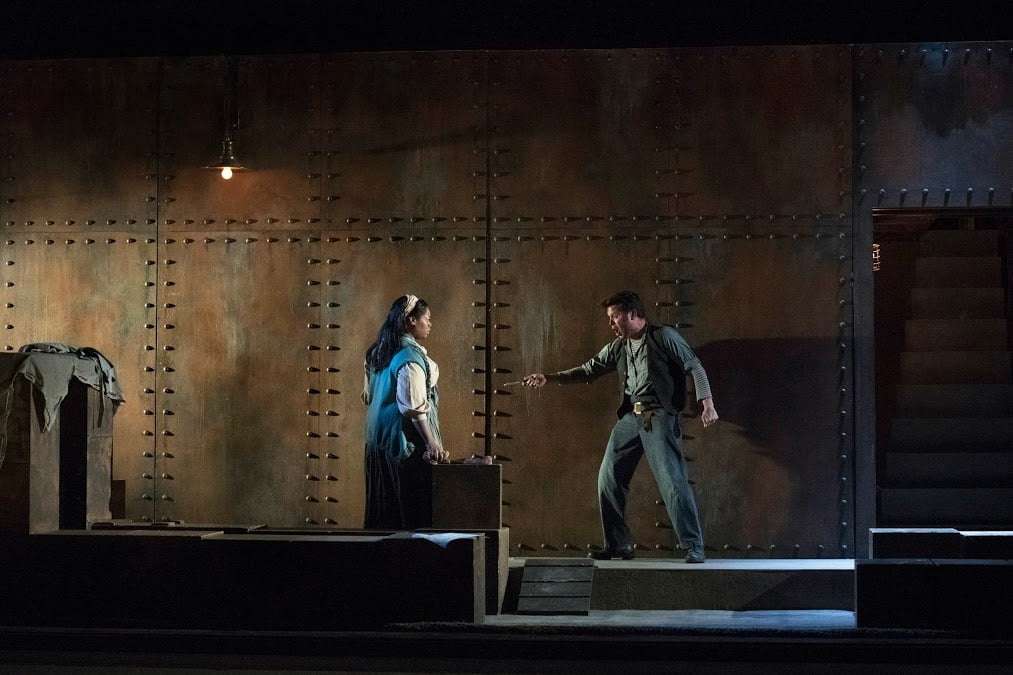 To keep its new production of The Marriage of Figaro company, English Touring Opera has revived two-thirds of Puccini’s Il trittico – Il tabarro and Gianni Schicchi – directed respectively by James Conway (ETO’s long-standing general director) and Liam Steel. The company’s weekend in Hackney starts a Spring tour that runs until early June and goes as far north as Perth and as far south as Truro, twenty-one venues and fifty-five performances.

Il tabarro, a painful exposure of love and misery on a barge on the River Seine, is probably the most verismo thing Puccini wrote and he crams in enough material for a full-length opera. Things aren’t going well between barge-owner Michele and his much younger wife Giorgetta since their child died, she has taken up with hunky stevedore Luigi, there are cameos from a song-seller, a sweet pair of young lovers and a mad old bag called Frugola to turn the screw on the main characters’ unhappiness, and then Michele knifes Luigi and conceals the body under the cloak of the title. Tote that barge and lift that bale, while old Mother Seine keeps rolling along.

The set, a riveted side of a barge pushed near the front of the stage, makes the space ideal for cabin fever and lust, presided over by Craig Smith’s rage-poisoned Michele, his black bass and blank delivery expressing everything from broken dreams to jealous fury. Charne Rochford (who was in the 2011 run) gives Luigi the full Puccini-tenor treatment with some gloriously ardent, lyrical singing. No wonder Sarah-Jane Lewis’s sumptuously sung Giorgetta falls for him, slightly marred by a few pressured top notes but otherwise sailing down to Rouen with wind in her generous, open soprano. Andrew Glover has a hit with his brief I’m-a-drunk-and-I-don’t-care aria, and Clarissa Meek (also 2011) is a suitably scabrous Frugola. The ending, with some clumsy business with the titular cloak and Luigi’s corpse, remains a bit of a muddle. 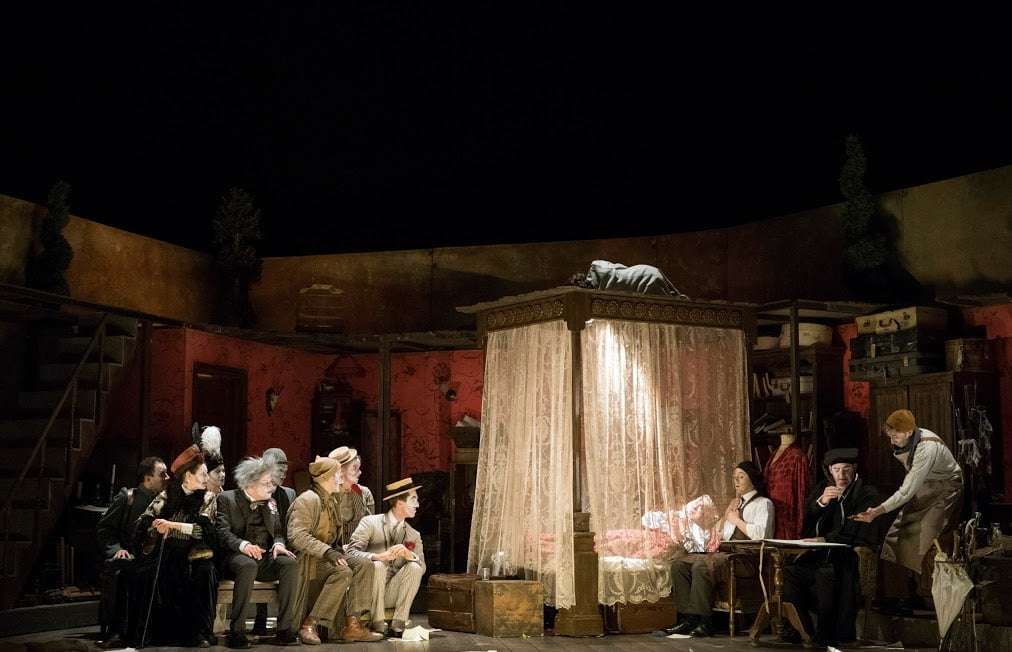 Liam Steel has moved Gianni Schicchi from Dante’s medieval Florence to the over-furnished bedroom of the just-dead but still-warm Buoso Donati in that city in the 1920s. His gaggle of extravagantly grieving, ruthlessly avaricious and Will-seeking relatives is like something out of a German expressionist painting, complete with ghoulish, skewed make-up, running from unabashed Whitehall farce to some wildly incorrect humour, and there are visual gags galore. The movement is brilliantly choreographed and very stylish. There is one gesture Lauretta (Schicchi’s daughter, in love with Rinuccio) makes with her eyes and a hand that made me laugh so much I almost didn’t notice how beautifully and deviously the excellent Galina Averina sang ‘O mio babbino caro’. Andrew Slater’s Schicchi winds this grotesque family round his little finger as he relieves them of their great expectations with bold singing and wickedly comic acting. Clarissa Meek is a superbly toxic Aunt Zita, and there is a fine, sweet Rinuccio from Luciano Botelho.

Michael Rosewell reveals in Il tabarro what the reduced orchestration had to offer with colour and some haunting watery sound effects, and the ETO Orchestra is with him all the way in the vivacity of Gianni Schicchi.