Britten
A Midsummer Night’s Dream, Op.64 – Opera in three Acts to a libretto by the composer & Peter Pears, adapted from the play by William Shakespeare [sung in English, with English surtitles] 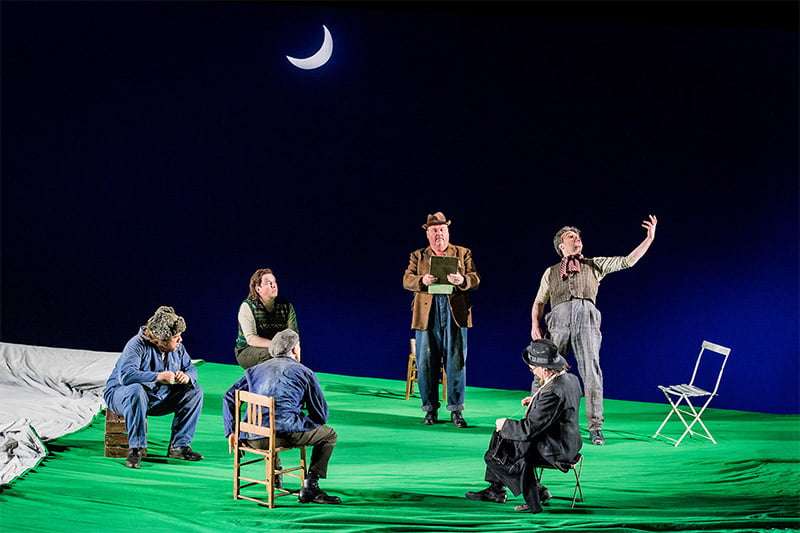 For the older opera-lover, mention of Peter Hall’s classic Glyndebourne staging of Benjamin Britten’s only Shakespeare opera is likely to squeeze out a fond tear of nostalgia, while for the slightly younger generation, Robert Carsen’s production has proved it has the magic and ‘legs’ to become one of the Dream’s touchstone productions. It was first seen in 1991 in Aix-en-Provence and since then has been round the international block establishing its staying power. It was last seen with ENO in 2004, and is being revived in preference to the brilliant and disturbing recent Dream, set in a boys’ school, from Christopher Alden.

With sigh-inducing simplicity, Carsen’s production covers Shakespeare’s big themes – getting lost in the forest of experience, order snatched out of chaos, consummation – with the double-bed the central element of the design, a setting for repose, dreams and intimacy. There is just one, colossal bed in the first Act, then several smaller ones as the second gets down to the nitty-gritty of self-discovery, and, as for the opening of Act Three – well, it’s one of the great, astounding, jaw-dropping sights. Just as telling are the configurations of the crescent moon, suggesting close-ups on and distancing from the action, and the beautiful lighting. 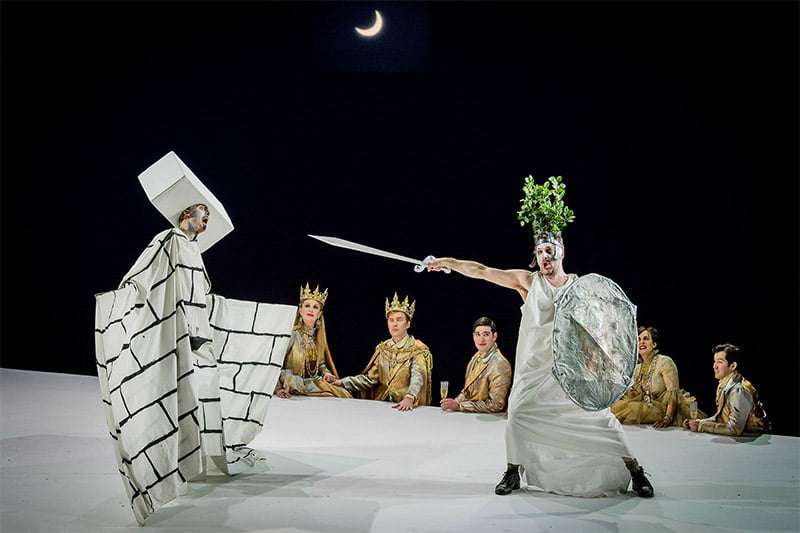 The same sort of sublime clarity applies to the character direction, which in turn goes a long way to obscuring the fact that Britten and Peter Pears’s drastic filleting of the play can, in other productions, reduce it to a précis. Carsen and associate director Emmanuelle Bastet score a particular success with the lovers, all four strongly characterised, even down to Hermia’s diminished stature. The six rustics stay the right side of slapstick overdrive in the Pyramus and Thisbe send-up, and Bottom’s transitioning to ass and back again is neatly done. Most importantly, the fairy realm is enchanting, witty and threatening, the stuff of uneasy dreams, capped by an amazing Puck and a platoon of mustachioed fairy squaddies dressed as mini-major-domos in green tail-coats, drilled brilliantly by Matthew Bourne, no less, in choreography elegantly revived by Daisy May Kemp. In terms of stagecraft, design and dance, this staging conspires to be both ancient and modern, and it dwells on the opera’s many layers with unstinting detail, imagination and depth.

And this is before you get to the music. Alexander Soddy is currently music director at Mannheim’s National Theatre and, in his ENO debut, is very fine. He lets the music creep into and expand the compression of the play with unerring mystery and, crucially, a slow-burn sense of rapture. He is also unfailingly with the singers, and the ENO Orchestra is on top form. Britten’s spectral harp-writing casts its glittering charm, superbly played; Thisbe’s Lucia-like flute obbligato makes its brief, tragicomic point magnificently, and the opening double bass glissandos shape-shift like clouds, but everywhere you listen, the attention to detail and the beauty of sound reels you in to Britten’s enchanting score.

The cast features a number of members from the ENO Harewood Artist scheme, thus addressing the company’s much-criticised penchant for American singers. The differences between the lovers leaps out at you, Clare Presland’s sleek mezzo works wonders for Hermia, Eleanor Dennis plays a dangerous, submissive game as Helena, with an attractive, slightly stolid Demetrius from Matthew Durkan, and a firm, lyrical Lysander from David Webb, all of them personable and up for seducing and seduction. The rustics are a joy, from Jonathan Lemalu’s dim Snug who gives us his all as Lion, to Robert Murray’s diffident Flute and diva-like Thisbe, and Joshua Bloom’s scene-stealing, ego-swaggering Bottom, even more inflated in donkey-mode and as Pyramus.

As malevolent puppet-master, Christopher Ainslie is a superb Oberon, his countertenor even throughout the range, with a particularly lovely lower register, and as he contemplated ever-darker mischief and became even-more seductive. He was matched all the way by the ravishingly sung, imperious Tytania of Soraya Mafi, unforgettable in her perfectly chiselled coloratura and, with Ainslie, casting spell after spell. The gorgeously costumed Theseus and Hippolyta from respectively Andrí Björn Róbertsson and Emma Carrington complete the consistently strong line-up. That leaves Puck from Miltos Yerolemou, a cross between clown, court-jester and tumbler, up for much middle-aged athletics and crystal-clear with his words, a far cry from the squeaky sprites of other productions.