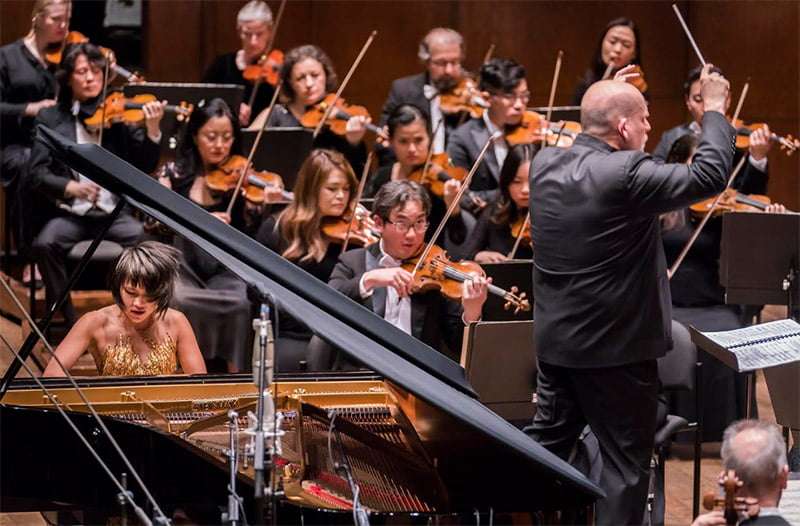 Yuja Wang is one of the stellar pianists of the younger generation, combining dazzling technical prowess and expressive character with insightful interpretation in a wide-ranging repertory. Her reading of Brahms’s First Piano Concerto was intensely passionate while also delicately refined, intelligently wrought and poignant. Emphasizing strong contrasts, her playing ran the gamut from demonstratively forceful to sensitively delicate. Although she rendered each of the three movements superbly, her energetic and fervent intensity gave the first movement an especially impulsive and highly dramatic character, and her gently shaped phrasing and deeply penetrating expressivity in the Adagio could melt the coldest heart. In the Finale she penetrated the inner depths of this youthful work. The New York Philharmonic under Jaap van Zweden’s sure hand had luster and played with commitment and enthusiasm. The horn section is to be complemented for its clear, velvety-smooth sound. Wang offered two encores: a lithe reading of a Mendelssohn Song without Words, (Opus 64/2 in F-sharp minor) and Brahms’s C-sharp minor Intermezzo from Opus 117.

Prokofiev’s Fifth Symphony was written in 1944 when the composer was in the midst of writing his opera War and Peace. The somewhat impulsive opening movement, with its stately yet fluid triple meter, wanders off at times into more acidulous terrain. The savage Scherzo, laced with vicious humor and enriched with brilliant orchestration, is the most memorable movement. The Adagio that follows has a strange coloration, and the Finale begins by indulging the then popular structural device of flashback, recalling the initial theme of the first movement, but soon sheds such references with a flitting little ditty for clarinet that opens the movement proper. Incessant repetition of this rhythmic figure while the violins and trumpet pound out E-natural (quite foreign to the tonality here) virtually without remission, the closing section builds to a whirlwind of incredible force endingly suddenly without apparent closure.

Van Zweden’s reading was masterful. Tempos were well-conceived, the occasionally acrid character of the music had sufficient bite, and vivid colors were highlighted. Especially in the first movement, Van Zweden emphasized the music’s brusque character, reinforced with explosive percussion. A high-spirited Scherzo, articulate and forceful, contrasted markedly with the Trio, and Prokofiev’s grotesque humor was given a noticeably demonic characterization. The Adagio, with its lumbering milky-white theme laced with eerie string harmonies, was set at a stalking pace. Van Zweden played the mercurial high-jinks at the close of the Finale to fever pitch.

This concert was an example of music-making at its highest level, the Philharmonic gave vibrant and resilient performances: in the Prokofiev the brass resonated with a strong, brilliant sound, the strings had a shining glow, and the woodwinds played with immaculate clarity and bright timbre.