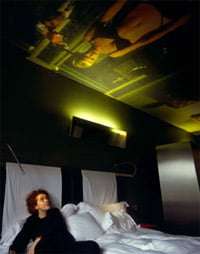 Employing the Young Vic as a studio for ‘left field’ music-theatre is such a good one that it seems astonishing no organisation has thought of doing so up until now. Hopefully the response to English National Opera’s two co-productions this month (the other is of Harrison Birtwistle’s “Punch and Judy”) will see a Young Vic residency being established as a permanent feature of the opera calendar. And there could have been no more provocative stage-work than Olga Neuwirth’s “Lost Highway” – premiered at Graz in 2003 and here receiving its first UK outing.

Even for a composer used to setting herself testing assignments, the adaptation of David Lynch’s 1997 film was a tough challenge. A blueprint for what this most inimitable of modern-day film-directors has done in the superimposing of different temporal states, such as may or may not correspond to a greater or lesser reality, “Lost Highway” is a consummate demonstration of film’s potential as should be all but impossible to transfer to another medium. Working with regular librettist Elfriede Jelinek, Neuwirth has devised a scenario that brings music, theatre and film into visceral accord – combining not to elucidate a ‘story’ which has no defined meaning in any case, but rather to present a multi-dimensional sequence of events whose deeper meaning is left for those in attendance to decide.

The stage itself is a full-length ‘runway’ dividing the auditorium into two equal halves. Suspended well above this is a spherical room of clear Perspex that enables the action to be perceivable at all times, with a spiral staircase that retracts to and from the stage so the two spaces can be accessed as needed. Other than the car which makes a totemic appearance in the later stages, there are few other props – and it is to director Diane Paulus’s credit that the drama unfolds so smoothly yet ambivalently; the boundary line between internal and external spaces holding good only so far as the duration of the event in question, and ceasing to be a division as such well before the denouement. 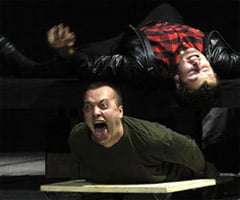 Against this abstraction are set elements that might seem almost simplistic in context: a recourse to ‘hot-rod’ mythology, for instance, or the filling of the room with carbon-dioxide gas to indicate changes in persona – but these are of a piece with Lynch’s mise en scène (he has never had any compunction in throwing elements of film noir and B-movie into the conceptual mix), and allow Paulus to endow the resulting images with an emblematic quality that, if it does not deny the frequent abstruseness of proceedings, at least clarifies and actualises them. In this respect, Riccardo Hernandez’s designs are nothing if not arresting in their immediacy, while Philip Bussmann’s video designs – an amalgam of pre-shot and on-the-spot footage (Almeida Opera regulars may well recall Per Norgård’s “Nuits des Hommes” as an important precursor in this respect) projected onto screens surrounding the Perspex room – Integrate flawlessly with Mimi Jordan Sherin’s lighting and Markus Noisternig’s sound; each of them complementary in ranging from the subtlest shade or ambience to the harshest glare or noise. 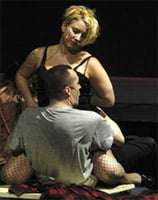 A work such as this might also be expected to draw on the widest range of vocal possibilities, and Neuwirth duly takes full advantage – as is formidably conveyed by the performers in this production. Mark Bonnar superbly portrays Fred Madison, the jazz trumpeter whose paranoia is barely beneath the surface and a candidate for the ‘psychogenic fugue’ through which (while in prison) he becomes Pete Dayton – the mechanic whose legato elegance is finely conveyed by baritone Quirijn de Lang.

Otherwise, the performance is dominated by soprano Valerie MacCarthy as Madison’s bored wife Renee and the gangster’s moll Alice – in which role her plaintive singing recalls the ethereal artistry of Julie Cruise in Lynch’s cult soap-epic “Twin Peaks”; and also by David Moss as the shadowy Dick Laurent and the gangster Mr Eddy – in which role his falsetto aria as he ‘dresses down’ an offending motorist is a set-piece of pure musical psychosis unequalled since Ligeti. Raphael Sacks is a suavely nasty Andy, the pimp who meets his demise in a vividly choreographed encounter with Pete, while Alistair Simpson and Andrew Playfoot are appropriately louche as Detectives Ed and Al. Making a welcome reappearance for ENO, countertenor Christopher Robson inhabits the role of Mystery Man with chilling rightness – a spectre whose omens are hardly to be ignored or trifled with.

Baldur Brönnimann conducts with unfailing zest and panache – the 27-strong ensemble drawn from the ENO Orchestra responding with alacrity, and with the interplay of live and sampled instrumental sound ideally judged for this acoustic. Indeed, as an exemplar of what is possible within the domain of music-theatre, “Lost Highway” could hardly be improved upon: no-one interested in what such an endlessly re-inventive genre currently has to offer should miss seeing this astounding production.