Handel
Acis and Galatea – A Pastoral Opera in two Acts to a libretto by John Gay, Alexander Pope & John Hughes, after Ovid’s Metamorphoses [sung in English] 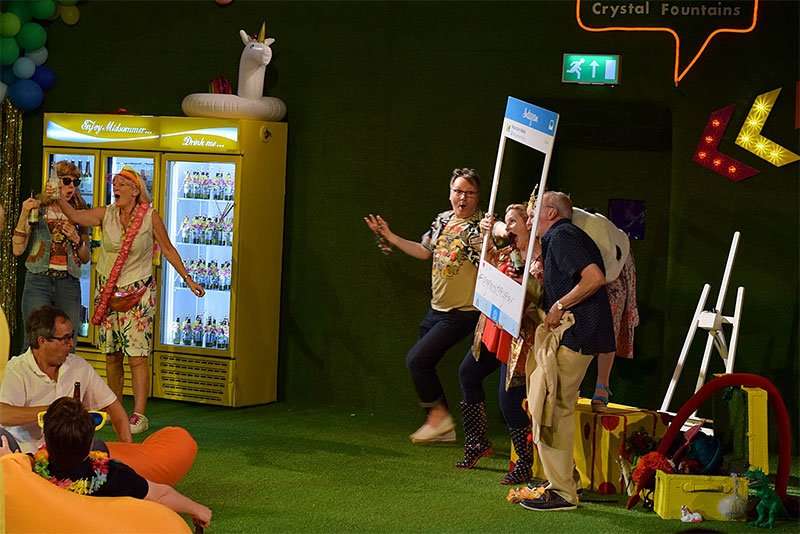 Welcome to Arcadia! Or Mountain Media’s midsummer party, in Sarah Tipple’s modern re-imagining of Ovid’s pastoral landscape as filtered through eighteenth-century sensibilities and Handel’s first dramatic setting in English, long before his development of the English Oratorio. Indeed, ENO’s debut production of Acis and Galatea celebrates the 300th-anniversary of its première and is presented at Lilian Baylis House. This may not be quite as far out as the original venue, Cannons near Edgware, but is aptly out of central London.

Played on an Astroturf lawn (complete with colourful bean bags and a large glass-fronted fridge full of alcohol), with the musical ensemble set in a silver lake to one side opposite a high hedge with an exit to further pleasures including crystal fountains, Tipple and her team have transported classical Arcadia to a cross between the modern-equivalent of Vauxhall Pleasure Gardens and a contemporary outdoor rock festival, with the chorus bedecked as glamping hippies – dividing the contents of a dressing-up box they find while extolling the virtues of pastoral existence. Not that they’ve left their modern life behind, as that malaise, the Smartphone, is used to capture constant images of their frolics, making use of a large cut-out Instagram board in which they can be photographed, chalking up new hashtags. While bordering on being overused, it affords a recognisably contemporary take on the development of Acis and Galatea’s relationship and pinpoints an up-to-date way of immortality in Galatea’s setting up an online memorial for Acis. Such a contemporary phenomenon might not have encouraged Handel to write such murmuring recorder music as Ovid’s fountain of immortality, but is in-keeping with the well-considered and consistent updating. 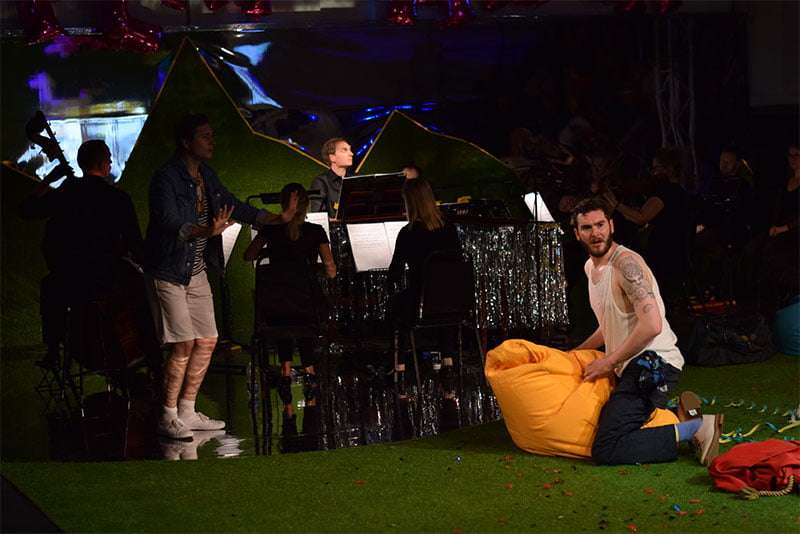 One of the major plus-points is the stunning singing of the Chorus, brought home here in the detailed work that ensures each member is a rounded, individual character. And in the relatively small confines of this venue – with audience on either side of the central playing area – sixteen professional voices pack quite a punch.

But to start the stage is empty. While Nicholas Ansdell-Evans conducts Handel’s spirited Overture, a lone man – diffident and nervous – enters, building up courage to ask someone out. This is Matthew Durkan’s Polyphemus, who Lucy Hall’s Galatea flirts with, cruelly. But she is waiting for Alexander Sprague’s shepherd Acis, one of the lads, but ready for love as their Instagram accounts duly record. The Chorus mocks Polyphemus’s lovelorn state and harry his rustic attempt at poetry to express his feelings for Galatea (‘O ruddier than the cherry’), explaining (though not excusing) his sudden outburst that kills Acis. Durkan’s performance leans Polyphemus the air of Shakespeare’s taunted and much-maligned Malvolio, inducing a pang of sympathy.

To match Durkan’s expressive baritone, Sprague’s tenor and Hall’s soprano are well-matched as the lovers, while Bradley Smith, as Damon, completes the quartet; he another shepherd caught up in the tragic tale as one of Acis’s gang.