Jonathan Dove
The Day After – Opera in one Act to a libretto by April de Angelis [world premiere of choral version; sung in English] 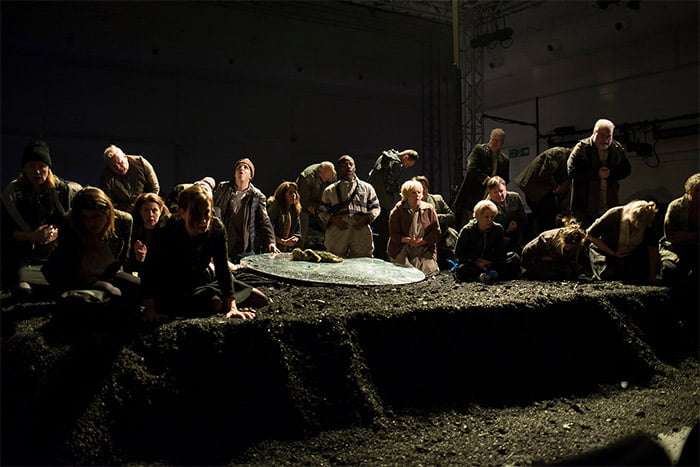 With Bat out of Hell due imminently into its London home, the Coliseum, English National Opera is not sitting idle. On the initiative of its artistic director, Daniel Kramer, the company for the first time is producing public performances in its West Hampstead rehearsal space. Studio 3 opened its doors for the world premiere of Jonathan Dove’s The Day After (2015), for Dove has adapted his original score for five amplified voices to include a chorus. To be so close to the ENO Chorus (I was in the second row), without the divide of an orchestra pit, is a wonder to hear – the wall of sound tangible as well as loudly audible.

The Day After reunites Dove with librettist April de Angelis having previously worked together on the Glyndebourne commission of Flight in 1998. There’s flight involved in this one as the central story is a re-enactment of Phaeton’s ruinous flight into the sun. A frenetic fanfare, brass overpowered by thundering timpani in this enclosed space, sets the scene. We’ve entered to find the chorus prostrate on a soil-strewn stage, a gauze at the back beyond which the orchestra – wind, brass, percussion and double bass – are situated. A central mound is backed by a wall of sorts on which sits an Old Woman. It’s after a natural catastrophe – these are the survivors, gradually waking to tell of their failed scavenging attempts (just ten grains of rice). To while away the long hours the chorus plead for a story to be told and the five principals re-enact Phaeton’s argument with his mother after being bullied at school, his search for his father, the god Phoebus, and the split-second decision that gives him the chance to take his father’s chariot and gallop to the sun, thus spreading disaster across the world. 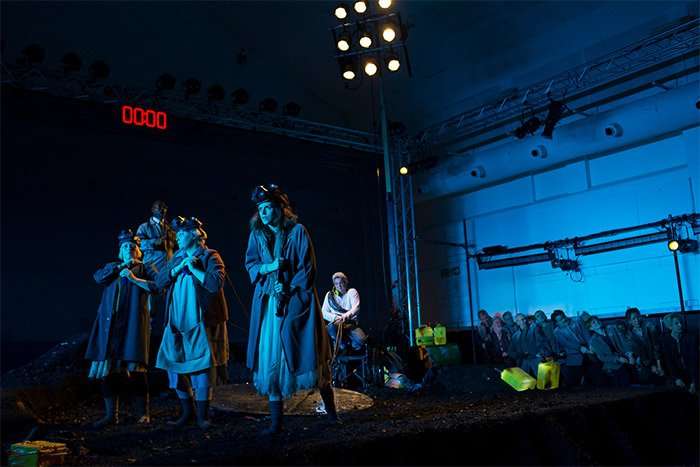 It’s not the only dystopian tale where the re-enactment of the past forms the thrust of the narrative. The year before Dove’s opera premiered in Holland, London’s Almeida Theatre produced Anne Washburn’s curious play Mr Burns which posited the idea that an episode of The Simpsons would be enshrined in a future cultural memory after an apocalypse. Ovid’s version of Phaeton is a much classier idea, even if I would have thought the last thing I wanted to hear about was how the world was destroyed.

As ever, Dove’s music is immediately arresting. Unashamedly tonal, he has a knack for writing natural vocal lines and he pounces on de Angelis’s short pithy sentences or phrases. There’s an early beautiful solo for Susanna Tudor-Thomas’s Old Woman, accompanied solely by an ethereal harp and, given the quality of the ENO Chorus, sometimes his choral writing here overwhelms. William Morgan metamorphoses into blond-locked Phaeton by the simple taking off of his beanie hat, while Robert Winslade Anderson assumes Phoebus’s role still with his hi-viz overalls on. Some words were hard to pick up being so close, but on the whole the diction was good and James Henshaw, usually ENO’s chorus director, took charge of the orchestra with great aplomb. Jamie Manton and his team conjured up an apt dystopian scene without the extraordinary outdoor effects Dove referred to in the programme for the Dutch production; even if the initial shock of a soil-littered stage went against the sun-drenched plain photographed on the cover.

It’s a intriguing piece – thankfully there is a ray of hope at the end – and will be perhaps remembered as the start of an enterprising ENO scheme to give opportunities to up-and-coming directors and designers, let alone highlight the excellence of the Chorus. A second production, of Gilbert & Sullivan’s Trial by Jury follows for four performances in early June.