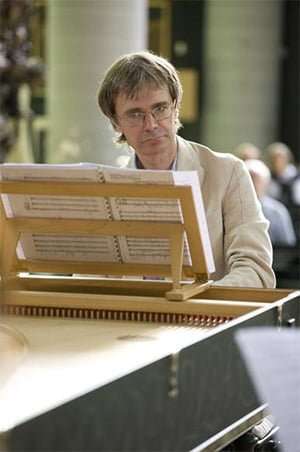 Fresh from his appearances at the York Early Music Festival with La Risonanza, Fabio Bonizzoni gave this very intimate recital of harpsichord music in the drawing room of Sir Vernon Ellis’s London home on a perfect English summer’s evening. We have become so accustomed to the notion of concerts being mounted in public arenas that it is easy to forget that a great deal of music composed up to the time of the First World War or thereabouts would have been conceived for and realised in such private settings as this. And, for better or worse, it is hard to imagine music of such subtle charm ever gaining wide currency such that it should demand considerable spaces, despite the different national styles and temperaments undoubtedly represented in the music of these earlier centuries. Although placed last, J. S. Bach’s Toccata should simply be seen in this context as the piece originating latest in time (even though it was composed early in the composer’s career) rather than as a terminus ad quem.

Bonizzoni certainly identified these characteristics, but what pervaded his performances overall was his ability to provide a framework of elegance and refinement, in which to draw contrasting emotional worlds. His style might be compared to allowing the eye to follow the succession of arches along the nave of a Baroque church or the flow of its vault overhead, undisturbed by any jagged protuberances or jarring colours. For example, in Girolamo Frescobaldi’s Aria detta La Frescobalda, even as Bonizzoni negotiated the sudden switches in rhythms between sections, this was sustained over a steady pulse. But this is not to suggest that the progress of the musical discourse was monotonous. Time was allowed for salient chords to be given full weight in Toccata I so as to pinpoint its harmonic structure clearly, and there was a dynamic sense of tempo in longer pieces such as Cento partite where excitement was engendered by increasingly fast-paced episodes, and tension heightened, by emphasis on its chromatic lines.

Bonizzoni’s performance practice is very different from the wizardry and caprice of his teacher Ton Koopman, though admittedly the pieces he was performing are not marked so much by the stylus fantasticus of which Koopman is so fond and proficient. But Bonizzoni’s manner was still able to encompass a crisp delineation of the apparent dance rhythms at the opening of Cento partite, a certain bravado in the musical realisation of a battle in Capriccio with its rollicking bass lines, and bolder, earthier homophonic chords in Carreira’s Cançao, bringing to the fore some real Spanish grittiness. Surprisingly perhaps, given its theme, Froberger’s Meditation was serene and bright, offering a sense of cathartic liberation in the way that John Dowland’s melancholic musings often bring release, though no doubt this was aided by some repeated notes that particularly emphasised the flat-ward tendencies of the harpsichord’s unequal tuning, creating a bittersweet quality.

The harpsichord used was one by Michael Johnson, owned by Sir Vernon. Although not especially reverberant, it was resonant in the middle bass range enabling the indefatigable sequence of harmonies in Bach’s Toccata to underpin the performance compellingly. At the opposite end, Bonizzoni could master a fresh, almost citrus, clarity to Couperin’s Prélude et Passacaille, and spin out the trills in Forqueray’s La Buisson as a seamless, integrated melodic line rather than as an excrescence imposed from without. Together with consistently balanced voicing among the contrapuntal parts, Bonizzoni’s playing was an unalloyed pleasure.