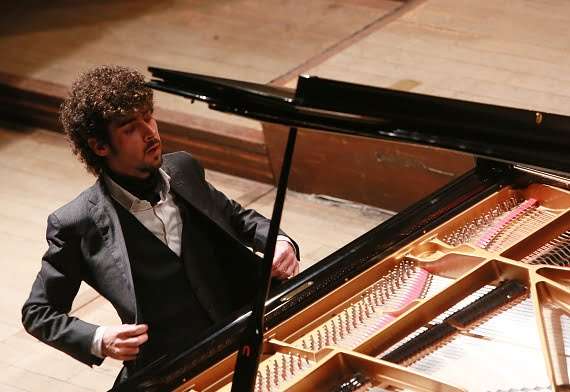 Federico Colli, winner of the 2011 Salzburg Mozart Competition and Leeds 2012, is a musicianly thinker with clear ideas on what he wants from the audience – no applause until the end of the second half was a request, a shaking of the head a cue to silence nervous clappers following the first of the Domenico Scarlatti Sonatas (F-minor, Kk19). To the point of tonal tautology, his recital made for a predominantly D-minor traversal, with prolonged emphasis on shades and tricks of pianissimo, some remarkably whispered, others on the threshold of keyboard response. In pursuit of delicacy, he took high-risk chances. Likewise dramatically, though not always convincingly. The Brahms and Bach-Busoni went for extreme registrations of loud and soft, occasionally short-surged crescendos, but at the expense of larger-scaled structural cohesion or ongoing momentum. Focused on repeated binary schemes and variation sequences (literally repeated dynamics, too), the nature of the repertory made for a progressively wearing patchwork of paragraphs and episodes, wanting in longer-termed, more substantially argued opportunities.

Colli’s Scarlatti group – preferable to, say, Sudbin, not as lean or ‘modern’ as Demidenko – suggested a pianist given to deep introspection and intimacy. Here, one could sense, was the artist as composer, confiding to the instrument, uncaring for time or context, needing shadows and a more unlit space than the one he was given. Hushed rumination was the order of the hour. His trills were tremulously refined, his cadences prolonged and abundant in affect, chaste in their romantic caesuras and adieus. More than once, Allegros were slow, Andantes were fast (compared with Horowitz’s magically defining post-war handlings of the commodious E-major, Kk380, his unexpected briskness had arguably less to do with enchantment than efficiency).

Colli is a pianist who evidently savours voicing, tessitura and articulation. But where he fell short on this showing, underlined further still following the interval, was a lack of ability to nuance changes of mode. In particular his swings from minor to major counted for little, the major-thirds of his Steinway felted rather than bright. Notwithstanding the sensitively painted ending of Brahms’s posthumously published 1860 Theme and Variations (from the Opus 18 String Sextet), the maggiore moments of the evening came across too often like cold marbled dawns through white mist. Schubert’s summer twilight perspectives, casting their light across the nineteenth-century, show us dimensions – sad, sweet, sensuous – Colli might selectively have admitted.

The mosaic of Mozart’s D-minor Fantasia ran a bleak course. One diminuendo scale, bar 44, caught the attention; the mannered extension of rests and silences inclined to sap tension; a tendency to read the semiquaver upbeats of the Adagio as demisemiquavers unsettled; the closing D-major Allegretto was devoid of even a flicker of dolce smile.

In a stroke of quirky (certainly unclear) planning, the advertised programme should have closed with a reprise of two Scarlatti sonatas, Kk380/450. In the event Colli omitted both, substituting instead a pair of muted Baroque encores, politely received – his own arrangement of ‘Lascia ch’io pianga’ from Handel’s Rinaldo; and Bach’s ‘Jesu, Joy of Man’s Desiring’ in the 1920 Myra Hess version – played less purely or calmly than the great lady herself.