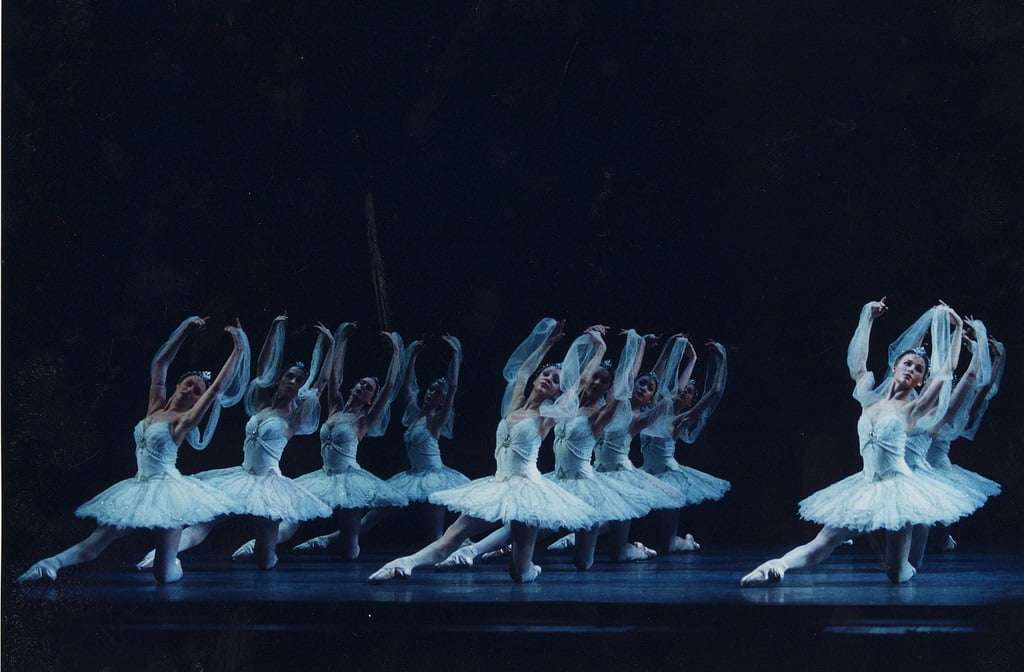 It has been five years since La Bayadère has been seen performed by The Royal Ballet here at Covent Garden in Natalia Makarova’s production, so its return to the repertoire is most welcome, particularly on the evidence of a meticulously prepared first night which saw the company field some of its most illustrious star dancers. The break in time allows for some perspective to be taken on its worth, and it emerges as a splendid gauge of the company’s health, given the considerable demands it places both on the corps de ballet as well as the soloists and principals.

To deal firstly with the caveats, Boris Gruzin, old conducting hand he may be, did nothing to curb the orchestra’s rough and tumble approach to Minkus’s score, and imposed some decidedly wayward tempos – one Act Three solo audibly sped up, as if the communal winding key had been given a few turns. Often, he was a degree too slow, pulling in the natural momentum of the dancing. While the sets remain colourful, traditional and literal, the decision to retain a front scrim curtain throughout the whole of the third and fourth acts (for the sake of a couple of projection effects) not only served to rob the stage picture of pin-point clarity but also left the solo dancers at the mercy of the Covent Garden follow spots, which seemed continually to be playing catch-up on where the dancers may be. A disappointing and amateur fly in the professional ointment of this staging’s otherwise high production values. 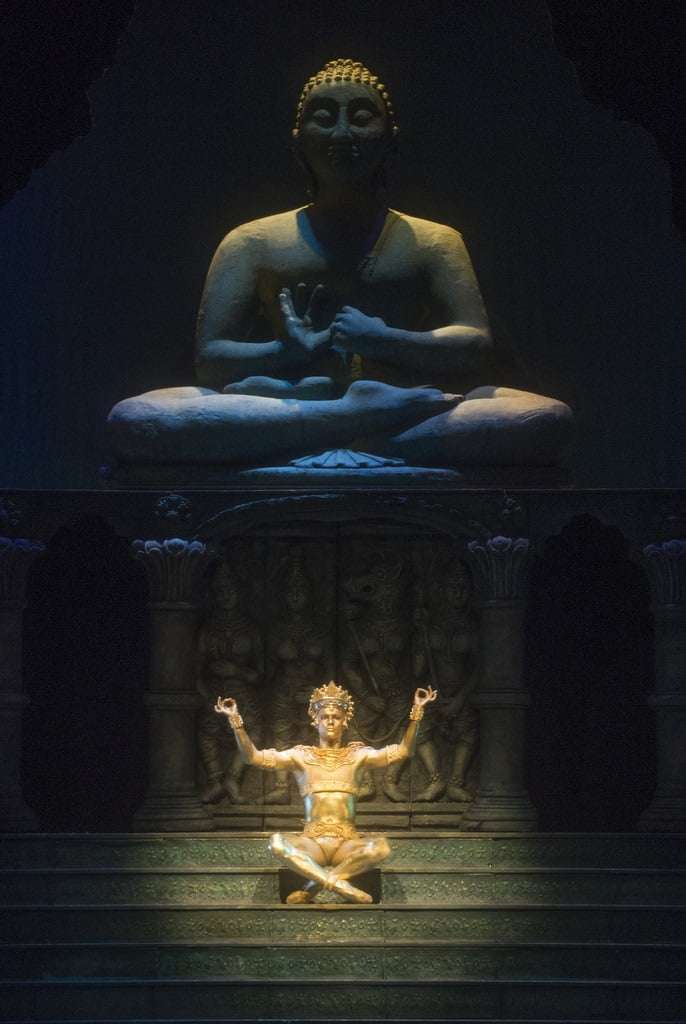 But on to more positive news. The Royal Ballet dance La Bayadère with both style and technical mastery, none more so than the female corps de ballet, which made the famous Act Three ( in this production Act Two) Kingdom of the Shades something of poetic beauty. There is perhaps no greater test of an ensemble than this scene in which, as part of the warrior Solor’s opium-induced hallucination, the twenty-four images of the dead bayadère Nikiya, descend the mountain to dance. When done expertly, as it was here, it takes on a genuine hallucinatory quality, as twenty-four bodies seem to move as one. Harmonious placement of head, arms, torsos and legs, as demanded by the old master Petipa, is essential; The Royal Ballet passes the test.

Much pleasure in the ‘smaller’ roles, notably in the Act One wedding festivities where the eight dancers of the pas d’action showed stylistic unity, from the fakir, danced with wild-eyed fervour by Luca Acri, and an impressive Bronze Idol from Alexander Capbell. Superb character dancing from Thomas Whitehead’s imperious, cruel-eyed Rajah and Gary Avis’s High Brahmin, far from the eye-rolling scenery-chewer this production has seen, but rather a proud priest brought low by his own uncontrollable passion for a simple temple dancer. These were all performances which drew the eye and contributed to the richness of the presentation of a ballet which can, all too easily, become just about the principals.

In terms of those principals, the company fielded its A team. Mention must be made of the three solo shades in Act Two – if Akane Takada was a notch below her classical best, no such caveats for a sparkling Yuhui Choe in the first variation, gaily tripping through the choreography, and Yasmine Naghdi in the second (originally third) solo in which she danced with magisterial poise. Natalia Osipova, no less, played the Rajah’s daughter Gamzatti, but Osipova never plays second fiddle, and she made the most of her every appearance; too much so, perhaps. The technical command she displays is formidable, unquestionable, but, stylistically, she seemed brought-in from another production – her Bolshoi ‘bigness’ sitting at odds with Makarova’s Mariinsky/Kirov restraint and elegance. Her acting is remarkably clear, and there are many telling details in her portrayal of a commanding, yet, inherently weak princess, but she does let in more than a hint of contemporary vernacular gesture in what should and must remain a nineteenth century aesthetic world. 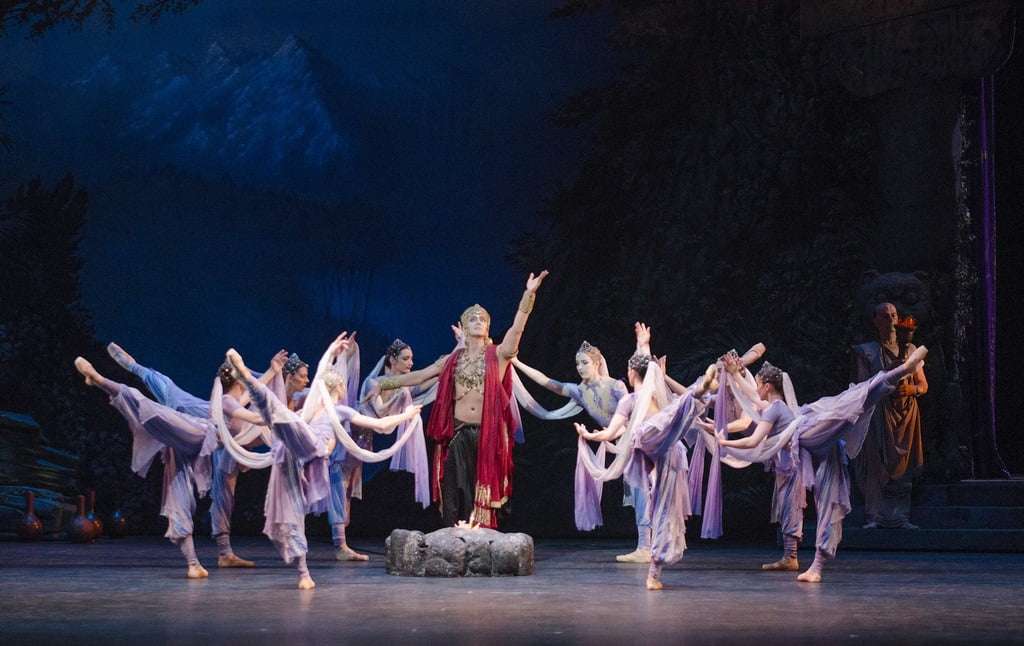 Vadim Muntagirov, the danseur noble of one’s dreams, delivers a Solor of the highest order, bringing a welcome boldness to his acting in the first scenes, but never sacrificing his purity of line or nobility of carriage. His solo dancing is an object lesson, his placement perfectly judged, the technical demands met with a creamy assurance. There is genuine chemistry between him and his Nikiya, Marianela Nuñez, true belief in this tale of forbidden love. He is a gallant partner, assured in all he must do to show off his ballerina and, in the Kingdom of the Shades, to lend her an evanescent quality. There is perhaps no role in the repertoire which suits Nuñez better – it is a perfect vehicle for her pure line, her open and unfussy technique, the noble radiance of her movement quality. This is Petipa at his purest, a product of the creator of Classical Ballet, the Fabergé of dance, and Nikiya embodies so much of what he achieved and what he stands for now, in the year of the two hundredth anniversary if his birth.

Nuñez is an ideal vehicle for Petipa’s enduring vision – a woman and dancer who is able, through her artistry and technical command, to bring the past to life with a vibrancy and relevance which casts much of what we are told is modern ballet into utter darkness. Petipa’s creations continue to live through dancers like Muntagirov and Nuñez who find the soul embedded in their roles and make them live, breathe and dance once more.