Skip to content
LnRiLWNvbnRhaW5lcltkYXRhLXRvb2xzZXQtYmxvY2tzLWNvbnRhaW5lcj0iNmIzNDMzNmNmZTc3NWZiNGJlMTVjMmIwMzU3NWM1MjYiXSB7IHBhZGRpbmc6IDI1cHg7Ym94LXNoYWRvdzogNXB4IDVweCAxMHB4IDAgcmdiYSggMCwgMCwgMCwgMC41ICk7Ym9yZGVyOiAycHggZG90dGVkIHJnYmEoIDEwOSwgMTA4LCAxMDgsIDEgKTsgfSAudGItZmllbGRbZGF0YS10b29sc2V0LWJsb2Nrcy1maWVsZD0iODM3Y2ExZjc0MGRjZDdkOTdlMzQzOWMyYjIwMWZmZTMiXSB7IGJhY2tncm91bmQtY29sb3I6IHJnYmEoIDIzOCwgMjM4LCAyMzgsIDEgKTtwYWRkaW5nLXRvcDogMTBweDtwYWRkaW5nLWJvdHRvbTogMTBweDtwYWRkaW5nLWxlZnQ6IDEwcHg7IH0g
LnRiLWNvbnRhaW5lcltkYXRhLXRvb2xzZXQtYmxvY2tzLWNvbnRhaW5lcj0iNmIzNDMzNmNmZTc3NWZiNGJlMTVjMmIwMzU3NWM1MjYiXSB7IHBhZGRpbmc6IDI1cHg7Ym94LXNoYWRvdzogNXB4IDVweCAxMHB4IDAgcmdiYSggMCwgMCwgMCwgMC41ICk7Ym9yZGVyOiAycHggZG90dGVkIHJnYmEoIDEwOSwgMTA4LCAxMDgsIDEgKTsgfSAudGItZmllbGRbZGF0YS10b29sc2V0LWJsb2Nrcy1maWVsZD0iODM3Y2ExZjc0MGRjZDdkOTdlMzQzOWMyYjIwMWZmZTMiXSB7IGJhY2tncm91bmQtY29sb3I6IHJnYmEoIDIzOCwgMjM4LCAyMzgsIDEgKTtwYWRkaW5nLXRvcDogMTBweDtwYWRkaW5nLWJvdHRvbTogMTBweDtwYWRkaW5nLWxlZnQ6IDEwcHg7IH0g
“Fiddler on the Roof” – musical based on the story of “Tevye and his Daughters” by Sholem Aleichem. Book by Joseph Stein, music by Jerry Bock, lyrics by Sheldon Harnick
LnRiLWNvbnRhaW5lcltkYXRhLXRvb2xzZXQtYmxvY2tzLWNvbnRhaW5lcj0iNmIzNDMzNmNmZTc3NWZiNGJlMTVjMmIwMzU3NWM1MjYiXSB7IHBhZGRpbmc6IDI1cHg7Ym94LXNoYWRvdzogNXB4IDVweCAxMHB4IDAgcmdiYSggMCwgMCwgMCwgMC41ICk7Ym9yZGVyOiAycHggZG90dGVkIHJnYmEoIDEwOSwgMTA4LCAxMDgsIDEgKTsgfSAudGItZmllbGRbZGF0YS10b29sc2V0LWJsb2Nrcy1maWVsZD0iODM3Y2ExZjc0MGRjZDdkOTdlMzQzOWMyYjIwMWZmZTMiXSB7IGJhY2tncm91bmQtY29sb3I6IHJnYmEoIDIzOCwgMjM4LCAyMzgsIDEgKTtwYWRkaW5nLXRvcDogMTBweDtwYWRkaW5nLWJvdHRvbTogMTBweDtwYWRkaW5nLWxlZnQ6IDEwcHg7IH0g

The Band conducted by Jae Alexander, Orchestrations by Larry Blank and Sophie Solomon

It had everything against it when it opened in New York in 1964. A musical based on stories set in the Russian pogroms about Jews being persecuted by Cossacks, the poverty of their existence, the ways in which Jewish traditions were changing as the world changed about them – could this really be the stuff of a Broadway show? By the time it reached New York the press in Philadelphia had already slated the production there. But despite further lukewarm notices, “Fiddler on the Roof” went straight to the hearts of the American public and eventually around the world. It ran for over 3,200 performances on Broadway and did a further 2,000 in London. Occasionally revived, it remains an all-time favourite musical with the theatre-going public. Zero Mostel originated the leading part of Tevye the milkman, around whose family the stories are based. Topol opened in it in London and went on to make the film. He was assured him of world-wide stardom.

Set in the Jewish village of Anatevka in Russia in 1905, “Fiddler on the Roof” tells of Tevye and his wife Golde’s attempts to keep above the poverty line and try to halt the progress of the world outside. They have five daughters for whom the local matchmaker will find suitable (or otherwise) husbands for them. However, the girls want to go their own way. Tzeitel, the oldest daughter, refuses to marry the elderly local butcher, and instead wants to wed the poor but younger village tailor, Motel. Hodel, the second oldest weds a revolutionary and flees to Siberia, while the third daughter, Chava, marries a gentile. The end comes for the family when the Czar’s Cossacks invade the village and drive out all the Jewish families, many of whom head for the USA (cue for the sequel, “Rags”, by Stephen Schwartz and Joseph Stein which carried the story, if not the characters, further, but it closed after four performances!).

Bock and Harnick’s show is a deft combination of Jewish comedy and serious historical events. It doesn’t always work in this production. Too much emphasis is placed on the comic possibilities of stereotypical Jewish characters that really border on caricature. After a very long first act (almost two hours!), there’s less than an hour to cover the dramatic side of the plot when the refugees are sent packing. The music, written in the Jewish idiom, has certainly given us some perennial hit numbers including ‘Tradition’, ‘Matchmaker’, ‘If I were a rich man’, ‘To life’, ‘Miracle of miracles’ and ‘Sunrise, sunset’ – all great songs that fit into the piece with clockwork precision. Here an ensemble that is as energetic as it is talented performs these showstoppers. 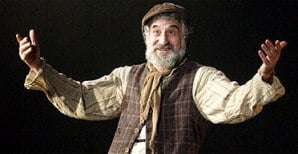 Individual performances include a clutch of delightful impersonations by the three sisters all looking for something outside their traditions (hmmm, that sounds familiar) – step forward Frances Thorburn, Alexandra Silber and Natasha Broomfield. And as their mother, Golde, Beverley Klein gives another of her inspired musical-comedy performances, (although she is now leaving for “Into the woods” at the Royal Opera House). In the leading role of Tevye, Henry Goodman, who is a fine actor, unfortunately perpetuates the talking-to-God hero as the archetypal mythic father-figure who never stops gesticulating, holding his head and muttering under his breath. It would be unfortunate in the circumstances to have to call it a ‘ham’ performance, but really, and at the risk of sounding like Harvey Korman in “Blazing Saddles”, when asked to approve the killing of all the first-born in Rockridge, I will only say that this Tevye is just “too Jewish”.