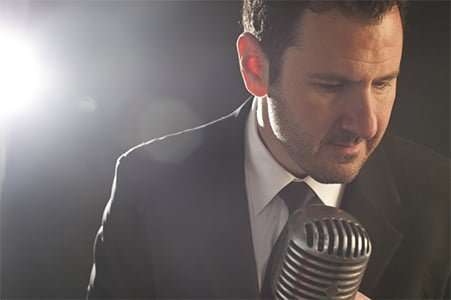 Accurately describing himself as a lyric baritone, the personable and talented singer, raconteur and entrepreneur Lee Lessack is making a welcome reappearance in London, having successfully performed in such venues as Pizza on the Park and The Pheasantry. Now he is enchanting audiences at the Crazy Coqs cabaret room. The title for his programme reflects its wide range and its intriguing approach, revealing that the links between the Champs Elysées and Broadway are not that remote. Previously Lessack has devoted evenings to songs of the Paris boulevard and to the catalogue of the great lyricist and sometime composer Johnny Mercer, and here he combines both those enthusiasms with other material that is sometimes familiar, sometimes not, but always fascinating.

The repertoire ranges from Stephen Sondheim’s ‘Being alive’ (“the ultimate theatre song”) to Leiber and Stoller’s raunchy ‘Black demin trousers and motor cycle boots’ (a huge hit in France when recorded by Edith Piaf as ‘L’homme à la moto’) via folk-singer Susan Werner’s plaintive ‘I guess that I don’t miss you much at all’. Much of Lessack’s material prompts historic or personal reminiscences – as a Bar Mitzvah treat, he was taken to see his first Broadway musical, Pippin, which started a lifelong admiration for its composer, Stephen Schwartz. They were to become good friends, and Lessack gives a heartfelt rendition of Schwartz’s haunting ballad, ‘Dreamscape’ (“Life is nothing but a dreamscape, and the dream is mine to choose.”). Lessack is now the owner of a record label, and Schwartz is one of his many contributors.

Lessack opens his act with Ann Hampton Callaway‘s ‘At the same time’, recalling that his fellow cabaret singer told him that while composing it she imagined it being sung by Barbra Streisand. A few years later, Streisand recorded it! For his tribute to Mercer, Lessack plays a fluke (a cousin of the ukulele) for the delicious ‘Pineapple Pete’, describes the “Mercer moment” when he first heard ‘Out of this world’ (music by Harold Arlen), and negotiates the complex rhymes of ‘Too marvelous for words’ (“like rapturous, fabulous, your voice is tintinnabulous”). In memory of his music-loving grandmother (who could not talk during her last years, but could still sing beautifully) Lessack sings Kathy Matteau’s touching ‘Where’ve you been?’

One of the pleasantest discoveries in Lessack’s programme is a luscious waltz called ‘Storybook’ which could well be an authentic song of the boulevards but is a number from a musical version of The Scarlet Pimpernel, composed by Frank Wildhorn and Nan Knighton. The expression of longing for a love with a “storybook ending”, it has a magnificent sweep, and Lessack is aided in achieving this by the brilliantly melodic and sympathetic accompaniment of Nathan Martin. The ambience of France takes precedence during the final portion of Lessack’s programme, starting with Gilbert Becaud’s ‘L’importance c’est la rose’ before honouring Charles Aznavour and Piaf. He sings two of Aznavour’s spellbinding compositions, ‘She’ (English lyrics by Herbert Kretzmer) and ‘The sound of your name’, then gives due emotional emphasis to Piaf and Marguerite Monnot’s heart-breaking ‘Hymne à l’amour’, sung in the original French version. Lessack’s range is impressive, both in voice and material, and the result is an evening to savour.