Janáček
Příhody lišky Bystroušky: The Cunning Little Vixen – Opera in three Acts to a libretto by the composer after Rudolf Tĕsnohlidek [sung in Czech with English surtitles] 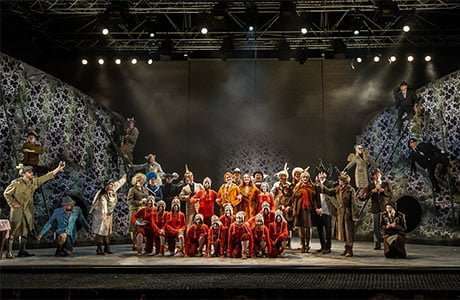 Ninety years on and a cartoon strip that briefly appeared in a Moravian newspaper is still telling the world much about life and nature, as immortalised by Janáček’s wonderful score, and taken to a new high by Daniel Slater’s staging for Garsington in its first Janacek opera. The result is this immensely satisfying production of The Cunning Little Vixen.It helps of course that the glorious countryside of the Getty Wormsley estate is in full view from inside the elegant opera house, but Robert Innes Hopkins’s set, rather than compete with it, presents the diluted rustic charm of the country inn, where much of the action takes place, smothered in hideous wallpaper of giant leaves (shades of Richard Jones here), a neat summing up of blinkered human limitations.

Slater has a few more inspirations up his sleeve. Rather like one of those characters in The Archers who are talked about but never heard, The Cunning Little Vixen has Terynka as the village’s unattainable object of desire much fantasised about but never seen. Here, though, during the Prelude, she sits drinking alone in the inn, giving the Forester, who fails to respond, the full come-on. Then Terynka becomes the Vixen, one the alter-ego of the other, an expression of instinctive eroticism that Slater takes further by doubling the Vixen and the Forester by dancers, so that we get an inkling of the Forester as he might be freed from human care. On past experience, this sort of trope has been a mixed blessing but here in Maxine Braham’s unfussy and sexy choreography (superbly danced by Chiara Vinci and Jamie Higgins) it works beautifully, seeing the Forester a part of nature rather than its careworn guardian. It gave the humans an extra resonance and at the same time stripped the anthropomorphic antics of the animal world of sentimentality. The effect was both moving and bracing. 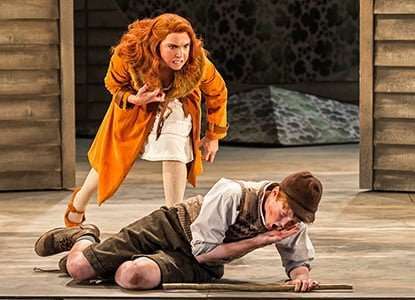 Claire Booth, with a very topical flame-haired-temptress mane of lustrous red hair, was a force of nature as the Vixen, feral, bold, then suddenly and touchingly insecure as her desirability is made clear by Victoria Simmonds’s spiv-like Fox; and, as with all the singers, they both were at ease with the angular, Czech-friendly vocal lines. The costumes for the animals, birds, reptiles and insects are a triumph (greatly inspired by kitchen implements). The chickens and their priapic Cock (Alice Rose Privett on fine, clucking form) and a disgustingly randy dog (Anna Harvey, brilliant) stick in the memory, but wherever you looked some creature was doing something in Slater’s meticulously detailed plan. The Vixen’s shotgun-wedding scene was a joy, as was the squadron of her cubs.

On the human side, Timothy Robinson caught every drop of the Schoolmaster’s sadness, a man disappointed by everything, especially by love, and Henry Waddington’s Priest wearily emphasised the transience of life, both of them reminding us with unbearable melancholy that what separates us from animals is that we know we must die.Joshua Bloom’s robustly sung Harasta (who marries Terynka) went some way to redressing the balance.Grant Doyle, always an interesting actor-singer, gave the Forester enormous stature – this was the biggest role I’ve seen in him and he was gripping throughout – and his paean to nature as he moves into the sunset inside the theatre as the dusk gathered outside it was pure magic. Capping this was the stylish orchestral playing, volatile, ardent and astringent, and conducted by Garry Walker with a great sympathy for the way Janáček’s music briefly offers you searing, Technicolor blasts of wonderful melody before swiftly moving on. What a great evening of summer opera.