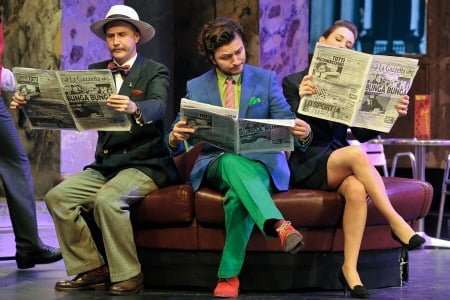 As frothy as the frothiest cappuccino, this little-known Rossini opera arrives in London with the astute sense of timing you might expect from such a master of musical comedy. Not that Rossini could know that a recent law against forced marriage has just come into being, nor the news that the phone-hacking trial had come to its conclusion. Even if one red-top had been acquitted of all charges; so an opera about a newspaper (however obliquely) is just the ticket.

Not surprisingly, in this production of Rossini’s La gazzetta at the Royal College of Music’s Britten Theatre, the newspaper of the title is tabloid-size (if not with a red masthead) and the action has been updated to the 1990s: a nod to the scurrilous nature of the press of modern times as well as media manipulation by such characters as a certain Italian ex-prime minister turned care-worker…

Given this is Rossini, nor is it a surprise, even before the curtain goes up, that there is a certain sense of déjà-vu. Don’t you recognise the Overture? It is the same as La Cenerentola, which was almost next off Rossini’s composition desk (Otello intervened). There are also similarities (if not wholesale borrowings) to his most recent offering, Il barbiere di Siviglia, and, not least in the final Turkish party, to Il Turco in Italia (as well as other lesser-known works). Perhaps it was the score’s very nature – specifically writing one character in Neapolitan accent, so the opera was unlikely to travel – that Rossini thought he had carte-blanche to re-use so much, but in this production at least, any unfavourable comparisons of recognisable sections are quickly negated by the sheer verve of Donald Maxwell and Linda Ormiston’s fizzing production. 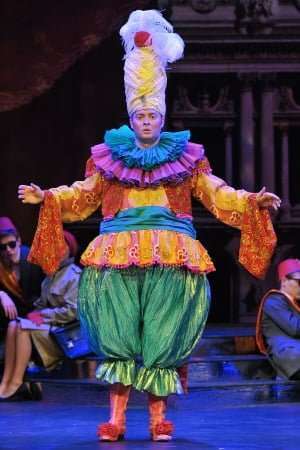 Maxwell played the Neapolitan in question – Don Pomponio – in Garsington’s resurrection of the piece back in 2001, and Timothy Nelson here has had the benefit of Maxwell’s experience, as well as three months’ language coaching. To be honest, my Italian isn’t up to much, so the subtlety of the Neapolitan passages were mostly lost on me, although the surtitles (courtesy of Garsington) attempted some colloquialisms to help us along.

Pomponio arrives in Paris (the Acadamie Nationale de Musique is the impressive backdrop) with his daughter Lisette. Staying in Fillipo’s hotel (Lisette is already in love with Fillipo), Pomponio advertises in the local paper – La gazzetta – for suitors for Lisette. As it happens another father, Anselmo, arrives who also wants to find a husband for his daughter, Doralice. Enter world-weary Alberto, who is despairing he will never find a girl without flaws (almost an anti-Don Giovanni). He falls for Doralice, thinking she is Lisette. And that is only in the opening scenes!

Powered forward by an irrepressible score, impeccably played by the RCM Opera Orchestra under Michael Rosewell’s direction and with a characterful harpsichord continuo (whose player was not identified in the programme), Rossini’s take on Goldoni’s Il matrimonio per concorso (The Marriage Contest) – referenced in the name of the Cafe in the hotel where it is set – bursts onto the stage. In addition to the fluid direction there were a number of sight-gags (the operatic equivalent of a pantomime horse, a camel offered Camel cigarettes for example). Whereas in so many productions you raise a smile, here I was laughing out loud, and doing it often. Of course, the plot is preposterous – as you might expect from Goldoni, with the old fools hoodwinked and made fun of as in all commedia dell’arte – but there are fine moments of both solo and ensemble numbers. Indeed, the piece seems to breed quintets, especially as one has only recently been found and been restored.

In essence the piece is a five-hander: Dom Pomponio and the four young lovers, although special mention should be made for Madama de Rose, aptly Rose Setten, who fulfils a Despina-like role in the action. Amidst some fine role-playing and singing from coloratura soprano Natasha Day as Lisetta, and leggero tenor Vasili Karpiak as Alberto, I particularly liked their respective partners: Nicholas Morton’s Filippo, who has the look and cheeky unpredictability of a young Jim Carey, and Kezia Blenek’s winsome and winning Doralice.

And then there is Don Pomponio himself, magnificently taken by Timothy Nelson in all performances. From his first appearance in tartan golf trews and tam o’shanter to his finale dressed in what must be the funniest operatic costume I have ever seen, he gamely became the butt of everyone’s jokes. It is a Falstaffian role (even if he doesn’t quite get the payback), and Nelson’s assumption of it typified the generosity and both the musical and visual wit of the production. I am not sure how a camel – nor a Wilson, Keppel and Betty tribute act – fit into the Turkish final scene (it’s not Egyptian!), but the whole conception will stick long in the memory for its dotty likeability.

However, despite its delights, I suspect La gazzetta will remain overshadowed by its more famous brethren, with which it shares much music, so I’d urge you to catch this production while you can.