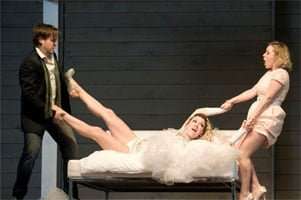 The last Garsington opera I saw was the company’s wonder-filled, magical farewell to the old place, a Narnia-esque production of Britten’s A Midsummer Night’s Dream that ended with the Manor and its environs spectacularly bathed in glimmering light. It was a moment I’ll never forget, and one that could only be achieved in a country-house setting. Now, two years on, the same director, Daniel Slater, has returned in order to stage perhaps the trickiest of all operas to bring off successfully, Don Giovanni.

In keeping with the ultra-modern Perspex world of Robin Snell’s majestic, Japanese-influenced pavilion at the company’s new home on the Wormsley Estate, Slater has conceived an up-to-the-minute concept for Mozart’s opera that is sporadically inspired but predominantly wayward.

The libretto suffers most at Slater’s hands; he seems hell-bent on subverting Lorenzo Da Ponte’s dramatic structure at every turn, testing himself against the text to see how far he can upend its intentions without snapping its logic. There is no discernible purpose behind such wilfulness other than to prove it can be done, so sadly the production joins the sub-category of summer festival offerings that amuse their audiences with chic-but-shallow entertainment. There’s a lot of fun to be had, but it comes at the price of character depth and psychological truthfulness. 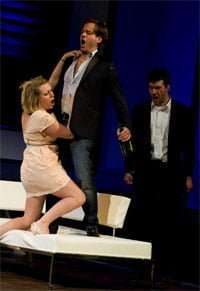 In a neat opening flourish, Leporello enters, throws the power switch and lets there be light. Unfortunately, Douglas Boyd’s low-wattage conducting shines dimly from the outset with a sluggish, texturally thin Overture over which Slater presents a pointless dumb show complete with clattering high heels and other distractions to draw attention away from the music. When the dust settles we encounter Don Giovanni who, far from raping Donna Anna, is sharing a pre-coital oyster dinner with her. Ah, she’s only joshing him with her protests; and look – she’s brought along her bondage equipment. When her father the Commendatore appears, the young hussy protects her daddy’s-girl status by acting the innocent victim – as well she might. Moreover, by releasing Giovanni from his handcuffs she enables him to stab her father. Wittingly? We never know. Is it guilt that turns her against her lover? That’s hard to tell. Does her tender hymn to ‘Padre mio’ become an act of warped hypocrisy? Absolutely.

This directorial deconstruction of Donna Anna’s virtue is not a new idea, but when the production proceeds to shoe-horn in every possible such conceit the law of diminishing returns applies. Zerlina and Masetto, far from being a betrothed couple, are a pair of exotic dancers and the ‘wedding’ is their act. The Commendatore lies simultaneously both on a mortuary slab and in a hospital bed. Is he alive or is he dead? If the former, why do Elvira and Leporello scream when he rolls up in his wheelchair to drag Giovanni into a very personal kind of hell? Ideas like this may claim to be ambiguous, but they’re merely half-baked. 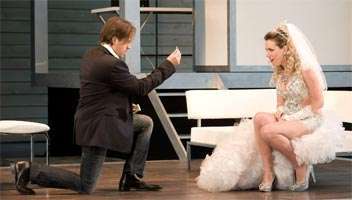 Still, Grant Doyle is a fine Don Giovanni, floppy-haired and dapper in jacket and jeans, looking like Alfie Boe on a chat show. His mellifluous, swaggering baritone (wonderfully sotto voce in his second-act serenade, ‘Deh vieni alla finestra’) is complemented by the darker hues of Joshua Bloom’s Leporello, and both of these fine performances help to cement the musical side of things despite the prevailing lack of crispness from the pit.

There is a superb, bell-like Donna Elvira from Sophie Bevan (Times Breakthrough winner at this year’s South Bank Awards for her stunning Sophie in ENO’s Der Rosenkavalier), even though she labours under the burden of being asked to trade dignity for ditziness in the role; but Mary Bevan is a little underpowered as Zerlina while at the other extreme Natasha Jouhl’s Donna Anna comes perilously close to the tipping point at which singing becomes shrieking. There can be no complaints about Callum Thorpe’s sturdy Masetto or Christophoros Stamboglis’s hard-as-nails Commendatore, and as for Jesús León as Don Ottavio, his pleasant upper register makes one regret the absence of ‘Dalla sua pace’ from Act One.

Taken on its own terms (rather than Mozart and Da Ponte’s) the production scores plenty of bull’s-eyes. Straight-lined chrome-and-wood designs by Leslie Travers, beautifully lit by Bruno Poet, provide a collage of voyeuristic frames worthy of Hitchcock’s Rear Window, and Slater and choreographer Ran Arthur Brown fill these with hurtling action that emphasises the opera’s giocoso credentials. An abundance of witty ideas carry the audience happily along: Leporello delivers his ‘Catalogue’ aria with the aid of a computer print-out; his master dines while zapping through opera downloads on his iPad. It’s a jolly divertissement, certainly, but a masterpiece like Don Giovanni should offer so much more than that.