The Prince of the Pagodas 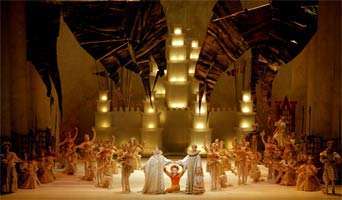 Kenneth MacMillan’s The Prince of the Pagodas returns to Covent Garden after a 16-year absence in what has been honestly termed a last attempt to ‘save’ it. Monica Mason, outgoing-Director of The Royal Ballet, has long cherished plans for its return, but problems with the Britten Estate having recently been resolved, it is only now, in the closing weeks of her final season, that the work returns. It was problematic at its creation in 1989, being over-long and with too rambling a narrative. (MacMillan created this Pagodas following John Cranko’s original 1950s’ collaboration with Benjamin Britten himself.) However, it launched the career of Darcey Bussell, then a 19-year-old plucked from the corps de ballet by the ailing choreographer, who was smitten with her long-limbed, open and honest dancing; a far cry from the then-traditional Royal Ballet ballerina look.

Pagodas possesses two elements which make its revival a true cause for celebration. Firstly, it restores to performance Britten’s strange, shimmering, percussive score of undeniable brilliance. This is virtuoso Britten, fully in command of his orchestra, delighting in the Balinese sounds he introduces and melds quite incomparably with Western instruments. This is a major composition, and to hear the Covent Garden Orchestra rise quite magnificently to its manifold challenges is worth the price of admission alone. Second is MacMillan’s choreography: Pagodas is an object lesson in creating neo-classical dance, a conscious evocation of, and homage to, the greatest of all classical works The Sleeping Beauty, and simply brimming with inventiveness.

MacMillan was, as he knew after a heart attack, living on borrowed time, and the sheer brilliance of his invention in Pagodas is not only to be admired in that context but also by any benchmark –He brilliantly manipulates the Classical idiom to create moves and sequences of startling originality, revelling in the technical abilities of his first cast – Bussell (as the Princess Rose), Jonathan Cope (as the eponymous Prince) and Japanese tyro Tetsuya ‘Teddy’ Kumakawa as the Fool, less court jester and more guiding force à la Monkey. Time and again, there is the sheer beauty of invention, be it in Rose’s languorous, searching solos designed to show off Bussell’s length-of-line, or in the Prince as the Salamander (he is the victim of a curse) when he slithers and contorts in his agony of imprisonment. 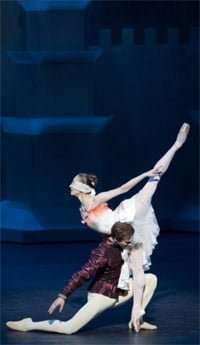 However, the decision has been taken to cut the ballet, and so twenty minutes of music and choreography have been excised, severely compromising the whole project. Musically, it may not ‘feel’ any different – the cuts having been expertly achieved – but the principle of restoring a musical masterpiece cut is unjustifiable. Additionally, while the aim of focussing what was at inception a sprawling work is laudable, and achieves a concentration on the principals, it seems a change in what MacMillan tried to achieve, namely a modern evocation of The Sleeping Beauty. Beauty needs its corps de ballet work and its ensembles, which give it texture and place solos and duets in context. Much of the corps work here is excised, leaving a large cast of courtiers in Act One with nothing to do except a great deal of balletic rhubarbing as monkeys (the court is thrown into chaos by Rose’s wicked elder half-sister who is incensed that she has been hard done by in the Emperor’s division of his lands between his daughters). Most noticeably, a delightful pas d’action for ‘clouds’ at the beginning of Act Two is gone, allowing for greater focus on Rose’s mental journey to the Land of the Pagodas, but thereby robbing the act – the traditional ‘white act’ of a classical ballet – of its defining corps work.

Much, too, has been done with the re-ordering of some of the numbers, unnecessarily bringing the work ‘into line’ with what is deemed ‘coherent’. Additionally, there is a shift of interpretation in the role of Rose herself: when danced originally by Bussell, it was noted for being a departure from the traditional ballet heroine – sweet, pure and innocent. Here it is much more a modern type of woman, unknowingly erotic and, as Jann Parry observes in her definitive biography of the choreographer, “bold and powerful”, the narrative very much a rite of passage for a young woman asserting her power and independence. That is now missing, and it is not Marianela Nuñez’s fault: she danced superbly, even if too traditionally. She carved her movements with both care and beauty, her long limbs used to great effect, the technical challenges easily overcome to allow her to create a notable interpretation. She very much depicts the compassionate side of Rose, who tries to protect her ageing, ailing father, and also is moved to offer solace to the tormented salamander, thereby releasing him from the curse and restoring to her her beloved prince. Nuñez was touching at those moments, a loving, almost maternal Rose, whose compassion is rewarded with a happy ending indeed. 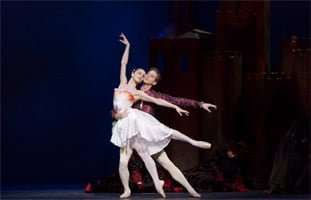 Nehemiah Kish partners with aplomb in the three great pas de deux for the Prince and Rose, but was overwhelmed by the demands of both the fight and subsequent solo in the final duet. He was particularly impressive, however, as the Salamander, wearing a helmet-like mask and reminding of Jonathan Cope, an equally diffident dancer who seemed, back in 1989, to be emotionally released by having his face covered. Alexander Campbell as the Fool was mightily impressive, happy in the demands of the flash-bang steps MacMillan created for Kumakawa, and clearly and gently guiding the story along to its happy conclusion. Alastair Marriott performed the Emperor at the last revival of Pagodas (1996), and clearly relished the opportunities the portrayal of this doddery monarch offers. The role has been seen as MacMillan’s savage portrayal of himself, a once great man laid low by physical frailty, although there is also a comment on the part’s originator Anthony Dowell who was then the company’s Director and bedevilled by problems – the unruly court of out-of-control monkeys and baboons takes on a different meaning when seen in that particular context. Marriott goes for the portrayal of a petulant, capricious and vain monarch who is brought low by his own foolishness and seems unabashed not a jot when restored to his throne by Rose. He started in high-camp mode, but toned things down considerably as the evening progressed. Tamara Rojo flashed her way through the wicked Épine’s choreography, exulting in the vampish nastiness of the part, although she inexplicably chose not to wear her third act red costume, preferring to remain in her first-Act blue number.

The ballet also features prominently four suitors for the hand of Princess Épine and who also court Rose: the Kings of the North, East, West and South, each representing an aspect of manhood: rough thuggishness, obsessive vanity, camp foppishness and pressing sexuality. MacMillan’s original quartet was immensely characterful, so it was good to see highly contrasting performances in this revival. Steven McRae was a delightful popinjay of a King of the West, all kerchief and sneezes while breezing through his filigree steps; Valeri Hristov ably mastered the slow turns and orientalism of the King of East, all while holding a mirror to admire his fabulous looks, and Ricardo Cervera’s loose-limbed King of the South impressed even if he could do with even more pendulous sexuality to round off his portrayal; his slo-mo pas de deux with Rose during Act II was able done though. It was a pleasure also to see the dancers of what is now billed as the Grand Pas d’Action in Act Three finally getting a chance to dance, Itziar Mendizabal catching the eye in her solo.

A most welcome revival therefore of Kenneth MacMillan’s last three-act ballet into which the company will settle even more in subsequent performances. Cavils apart, this is a major undertaking which presents the great riches of both Britten and MacMillan. A handsome gift indeed.

On an unrelated note, it was with some degree of dismay I noted on this Saturday night that The Royal Opera House, The Royal Ballet and the sundry Lords, Knights and Dames which run them wrote, said or displayed absolutely nothing to mark the beginning of Her Majesty’s Diamond Jubilee Celebrations. Perhaps they should take down the Royal Crest and the monarch’s initials from the front curtain…