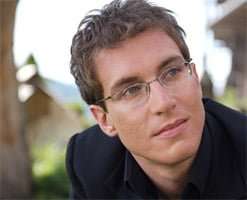 The Swiss-born American pianist Gilles Vonsattel, a Honens laureate, has an impressive array of awards and an extensive concert track-record in the United States and Europe. This was his recital debut at Wigmore Hall, although he had performed there as an accompanist a couple of years ago.

In terms of audience friendliness, it was a risk to make Heinz Holliger’s Partita the central work, but it was a risk worth taking. As well as showing off his pragmatic and virile technique, the piece also provided an insight into the ferocious concentration of his approach, and his off-the-cuff spoken introduction was to the point and attractively self-deprecating. Programming-wise, it was well set up by Beethoven’s Bagatelles. The unexpected turns, quirky charms, sudden visionary flights and contrasts between simplicity and complexity that thread through the six pieces suited Vonsattel’s sharp-witted style perfectly, and there was much to savour in his rippling attack, bright tone and keen appreciation of the set’s rapid changes of mood.

Unfortunately, the Bagatelles also revealed the bombast potential behind the sonic imagination and epic reach of the Holliger. The composer (and oboist and conductor), now 74, wrote it in 1999, inspired mainly by the playing of its dedicatee András Schiff, and it references Schumann in the way that Schiff-related ciphers are woven into the score, although they didn‘t seem to spring obviously out of the music, at least not on first hearing. The piece requires a change of piano, since, in performance-art tradition, it includes two ’Sphinx’ intermezzos, which are scratched and stroked by the performer directly on to the piano strings, but the dominant memory of the Partita is of dense clusters of notes yielding sympathetic strings overtones that accumulate into a ghostly chorale. Yet, despite Vonsattel’s magisterial engagement with the piece, the music’s expressive range remained defiantly predictable, for all the composer’s efforts “to go to the limits”.

The Ravel second half, including a faithful homage to the composer by Honegger, gave a much clearer idea of Vonsattel’s considerable virtuosity and sensibility. The Sonatine was remarkable for its poise and elusive lyricism, and Gaspard de la nuit was hugely impressive. Vonsattel’s fluid technique delivered an awesome command of tonal and emotional range that activated a total identification with the three pieces’ vivid pictures – a wonderfully veiled ‘Ondine’, an impassive and implacable ‘Le gibet’ in which Vonsattel’s subtly limited palette was put to fine expressive use, and a triumphantly scuttling ‘Scarbo’. Schumann, though, had the last word in Vonsattel’s encore, the Arabeske.