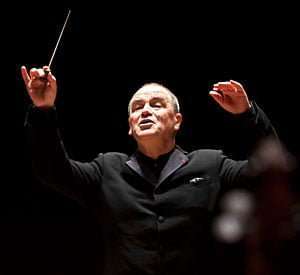 Igor Stravinsky’s Symphony of Psalms is “composed to the glory of God and dedicated to the Boston Symphony Orchestra.” Commissioned by Serge Koussevitzky for this great American institution, its headline-making thunder was stolen by Ernest Ansermet who conducted the world premiere, in Brussels in 1930, the Bostonians catching up soon after. Scored for an orchestra without violins, violas and clarinets, but including two pianos (shared with Carmina Burana, as are Latin texts), five trumpets and a harp, Symphony of Psalms is personal and universal, concise yet monumental, and solemn if stirring. Hans Graf (the Austrian-born music director of the Houston Symphony Orchestra) led a performance of clarity and purpose, sometimes a little cool if redolent of a centuries-old religious ritual. The woodwind-playing at the opening of the second movement was of notable finesse, then the Choir’s suitably unvarnished address turned to fervour at the climax, and if the finale’s rapaciously rhythmic passages needed more projection and punch, the serenity elsewhere was made all the stronger for chaste chorals and the lack of sentimentality; music more of the spheres than our earthly dwelling; Stravinsky absoluta.

Rather different is Carl Orff’s Carmina Burana (completed in 1936): vernal, bawdy, ironic and erotic, from poems compiled by drunken medieval clerics, and potentially overlong and banally repetitive. It’s easy to have a love/hate relationship with this work. For this performance if the compass didn’t quite arrow to full consummation we were certainly in heavy petting territory and sometimes with tongues. Opening with ‘O fortuna’, old and spicy as it is (one for older readers), this rendition was launched with impact and celebration. If Graf sometimes left too-long gaps between numbers, and tempos were occasionally over-moderate, he certainly had an underlying logic that sustained the whole, and even worked the minor miracle of turning passages that can seem interminable into fluent statements. 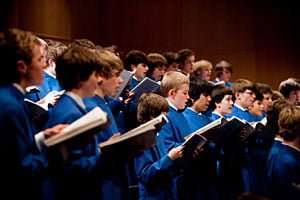 The choral singing was magnificent – lusty, enthusiastic, characterful and unanimous. Of the male vocal soloists, Andrew Kennedy (from the Choir area) gave us the squealing pain of the roasting swan, but Rodion Pogossov, even from the front of the platform, didn’t carry as well and although unstinting in declamation was neither railing or lecherous enough (depending on impersonation). Replacing Sally Matthews, Sarah Tynan’s contribution was yummy, both angelic and seductive, with long-held notes richly infused. She nestled in with the Trinity Boys, who were only allowed entry when it was their turn to sing (late on), a curious decision that denied them witnessing most of the performance and also delayed matters while the 24 filed on; they sang from a mix of memory and copy. The LPO musicians gave a bushy-tailed response, keenly observant of dynamics, details and subtleties but with no risk of under-playing (yet the rest wasn’t noise) – flautist Juliette Bausor and timpanist Simon Carrington were both star turns. But all responded with relish to Graf’s thought-through consideration; the 62 minutes didn’t seem that long. Carmina Burana closes with its beginning … and here concluded “with impact and celebration.”