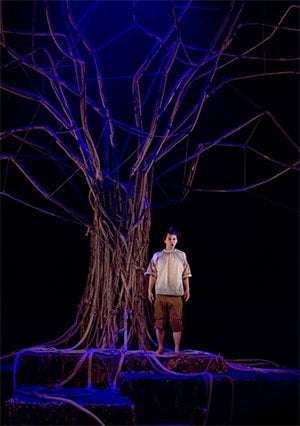 For his farewell project as Music Director at Glyndebourne, Vladimir Jurowski has opted to go out not with a grand operatic bang but with a gesture of his faith in up-and-coming musicians. A determination to nurture the younger generation is a quality the Russian maestro has in common with Benjamin Britten, whose centenary Glyndebourne is celebrating in style with a triumphant revival of Billy Budd. Three of Britten’s Canticles form the backbone of Wakening Shadow.

In conceiving this 75-minute hybrid work for the stage, Luke Styles, Glyndebourne’s youthful Composer-in-Residence whose cycle of Shakespeare Sonnet settings Vanity was well received at this year’s Festival, has collaborated with the emerging director and Sky Arts Futures Fund winner Daisy Evans. Together with designer Sophie Mosberger they have transformed the Jerwood Studio into a woodland bower of ropes and man-made cobwebs, and enlisted nine young artists from this year’s Glyndebourne Chorus to perform their loosely-shaped narrative. Set within the four sides of a square, with Jurowski and a chamber-sized London Philharmonic Orchestra tucked in one corner, the environment is strikingly atmospheric.

This team is not the first to attempt a theatrical context for Britten’s Canticles. Neil Bartlett’s musically unadulterated staging with Ian Bostridge and Julius Drake enjoyed a huge success earlier this year, first at the nearby Brighton Festival then subsequently at the Aldeburgh Festival and at the Royal Opera House, which is 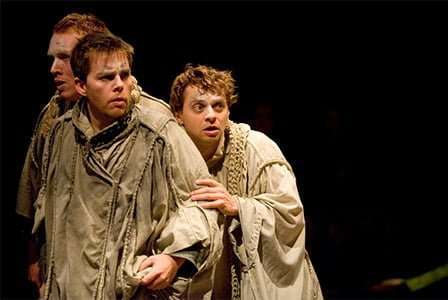 where I saw and admired it. Styles, though, is alone in daring to orchestrate music that Britten conceived as single-instrument accompaniment (for piano or, in the case of Canticle V, harp).Unfortunately for him, though, no one understood instrumentation better than Britten and Styles meddles at his peril. The younger man’s realisation of the clean, clear melodic lines serves only to blur the music’s definition and render its eloquence murky and diffuse.

Styles’s own compositions – an orchestral prelude entitled ‘Stirrings’ plus settings of poems by Brodsky, Byron and Shelley, together with various linking passages – sit uncomfortably alongside those by Britten even when he elaborates on themes from the Canticles themselves. Styles’s melodic style is brooding, sinister and eerie, with extensive use of hissing and insect noises, but at first hearing it appears to be low on shape and progression. There is little sense that the work develops through musical argument towards a cogent operatic conclusion.

The soloists are all good, and some are considerably more than that. Although the women do not have much to do, they throw themselves into what little they do have. Of the male singers, Rupert Charlesworth is the pick of the tenors and Owen Willetts is outstanding in Britten’s two countertenor roles. If only they’d been given the chance to sink their teeth into something more mature and dramatically engaging than Daisy Evans’s inconsequential production. The work’s dramatic through-line is anyone’s guess as earnest characters run hither and yon, pausing only to strike matches in a meaningful way. They flit, they float, they fleetly flee, they fly. There are technical shortcomings, too, that betray Evans’s relative inexperience as a director; for example, whenever the company members lift their eyes heavenward the audience is irresistibly drawn to follow their gaze. They see – who knows? – the sun, maybe, or possibly God; we see a lighting frame. The spectator’s suspension of disbelief needs better nurturing than that.

Consistently well sung but lumpily directed and dramatically disjointed, Wakening Shadow is a valiant music-theatre experiment that ultimately falls short, a brew whose music vacillates uneasily between the familiar and the unfamiliar, and between a pair of composers’ minds that rarely seem to meet. Jurowski and the LPO offer sterling support, as one would expect, but there is little they can bring to the enterprise beyond a measure of gravitas and a ton of good grace.