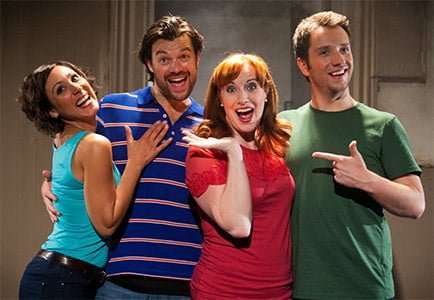 A musical about putting on a musical is bound to have great appeal to lovers of theatre, and [title of show] has that attraction in spades, for it is a lovingly fashioned salute to the sweat and tears, the inspiration and desperation that go into such a project. Hunter and Jeff are best friends whose initial aspiration is to get a show together so that it can be entered in the prestigious New York Musical Theatre Festival and from there … well, the dreams of such producers probably do not vary too much, though Jeff gets mad when Hunter starts rehearsing his Tony acceptance speech.

Initially having difficulty coming up with a subject for a new show they hit upon the idea of making their own efforts the plot, and from that point they write down everything they say and do regarding the project, in which they co-star with two actress friends. The largely autobiographical result, written in only three weeks, did indeed make it to the 2004 Festival with co-creators Jeff Bowen and Hunter Ball playing themselves. The title derived from the space on the festival’s application form for the show’s title to be entered. Though reviews were primarily favourable, it was two years before it had an off-Broadway production, and it finally made it to Broadway for a three-month run in 2008. 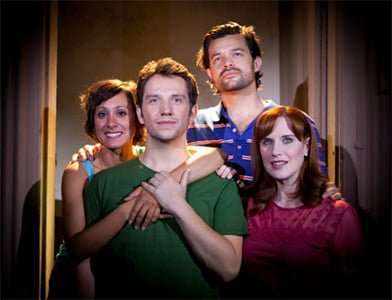 In the limited area of the Landor stage, director Robert McWhir and his choreographer Robbie O’Reilly give the show tremendous variety and a mobility that sweeps you along with the action, and the quartet of leading players display dauntless energy. Pert Sophia Ragavelas and raunchy Sarah Galbraith are the ladies, and each has show-stopping moments – Ragavelas with a manic ‘I am playing me’ and Galbraith with ‘Die, vampire, die!’. But the emphasis is on the two young men, perfectly delineated by Simon Bailey (who recently played Raoul in The Phantom of the Opera) and Scott Garnham (who was Understudy of the Year in 2011 when standing by for the roles of Enjolras and Marius in Les Misérables). Bailey and Garnham capture an almost childlike enthusiasm and fervour that is most fetching. The show’s musical director, Michael Webborn, not only provides expert piano accompaniment but gets one of the evening’s biggest laughs with a visual gag.

Show buffs will love the name-dropping of such unsuccessful Broadway productions as Henry, Sweet Henry, and there is a wonderful montage of dozens of ‘playbills’ for Broadway musicals that notoriously flopped, including some which have become really obscure. It cues a cute number which uses the titles displayed to form lyrics, including Sondheim’s Merrily We Roll Along, and he is also invoked by a couple of hilarious references to Into the Woods. [title of show] reminds occasionally of Merrily, especially when the protagonists start to fall out, when I thought Webborn was going to strike up a chorus of ‘Old friend’ to interrupt their bickering.

Though the musical runs out of steam a little after the Festival success, and the lyrics seemed to me to be stronger than the melodies, it is a brisk and engaging 90 minutes of considerable charm, and its witty and presumably wise look at a show’s creation plus the pressures of success, proves irresistible.