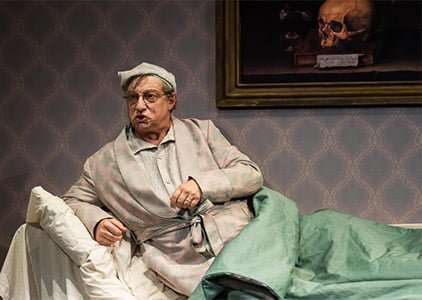 This is the first production of Donizetti’s comic masterpiece Don Pasquale at Glyndebourne’s summer festival since 1938, an unfathomable absence for an opera that offers all the joys and high-spirits that sit easily with the Glyndebourne milieu. Enrique Mazzola opened a superb evening with a spirited account of the Overture, the London Philharmonic Orchestra producing taut playing that ticked along the curtain-raiser’s merry and jovial way, with a just tinge of pathos and encapsulating the whole performance: a fun ride for all, with some sadness and regret, and all working out in the end.

Julia Hansen’s rotating set of rooms, through which Don P’s nephew Ernesto walks – the others are generally found in situ – highlights that it is he who is driving the action, able to be anywhere for anyone so as to manipulate matters. The weak-link though is these very rooms, which are all rather drab and unappealing. Still, the costumes are delightfully ‘in period’, and coupled with striking lighting the eyes are ravished. The final scene, in the garden, where the unfaithfulness of Norina (in disguise as Sofronia when she married the Don) with Ernesto could well been happening on Glyndebourne’s lawns: beautiful. 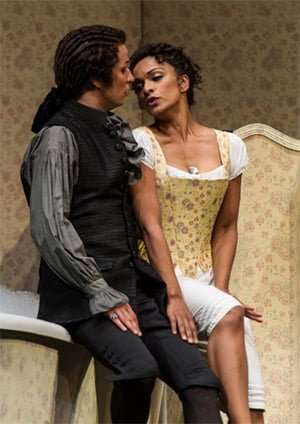 It’s a triumph for Mariame Clément’s direction. The reality is that DP is trying to disinherit his Ernesto with the aid of Malatesta, his doctor, who suggests that he marry his sister. Then matters develop and he marries a woman whom he is led to believe is chaste, spends her time sewing, and is very humble. The ink is not dry on the marriage contract when she starts demanding clothes, parties, money and alterations to the house. Poor old Don Pasquale is flummoxed, and a turning point is reached when she slaps her bamboozle husband, a moment that here elicits shock. It is a heart-breaking moment, one of those aspects of humane genius that Donizetti drops into his ‘comedies’. By the close, one has really got to know these people, and also understanding their foibles and motivations.

As Don Pasquale, Alessandro Corbelli timed every movement and placement to perfection, generously matching the matching the music and fellow singers. His annoyances and despair of old age and out-of-control were manifested through his grumpy face, but his whole body-language would have honoured a silent film. That he also sang superbly, and relished the patter, made his portrayal wholly satisfying, whether titillated by his bride-to-be or as a broken man. Norina was sung with gusto by Danielle de Niese, although there was some strain at the very top of her register. Hers is a strident soprano, deployed to glorious effect when feistiness is on order. She also soothed with velvet tones. 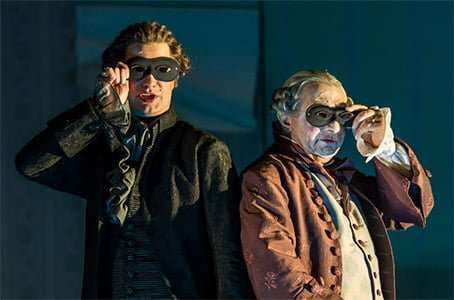 Omnipresent to drop words into ears, is man-in-black Malatestsa, exacting his wishes over his patient for whatever duplicitous scheme he has in mind. Subtle layers of sarcasm infected Nikolay Borchev’s arias and he sang with similar distinction in the duets and trios, not least with Norina when the plan is hatched, de Niese and he sparring off each other with relish. Ernesto, whom his uncle wants to marry off to a wealthy woman, was sung by Enea Scala, stepping in at short notice for Alek Shrader. Scala had all the high notes at his disposal and sang with panache and warmth to communicate Ernesto’s turbulent emotions. In the walk-on role of Notary, James Platt made much of a few lines.

One fell in love with this opera all over again, not a trivial work, but one populated with beating hearts.