Orchestra of the Age of the Enlightenment
William Christie 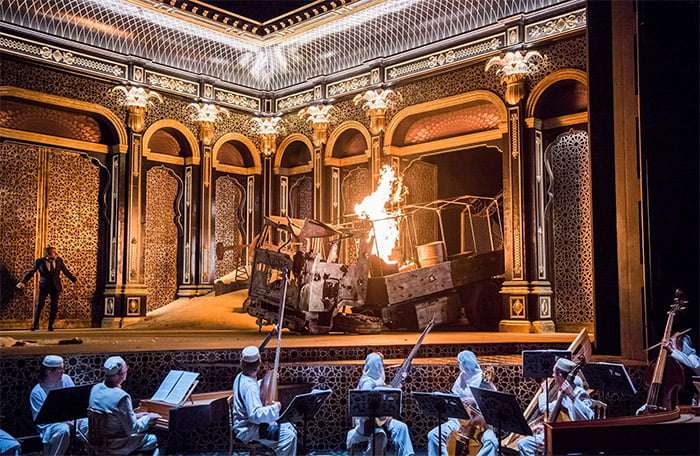 As one of the foremost pioneers in the history of opera, Cavalli’s reputation has been on the rise since the revival of interest in music before the high Baroque. Glyndebourne has already played a notable part in that, with Raymond Leppard’s leading of L’Ormindo, in 1967, and La Calisto, 1970.

William Christie argues the case for continuing that tradition with this production of Hipermestra (from 1658) – effectively a rediscovery for even the most experienced opera-goers since there has apparently been only one professional production of it since the seventeenth-century, and this is evidently its UK premiere (though the plot will be familiar to those who know Salieri’s Les Danaïdes).

It is a sign of executive and directorial confidence that Graham Vick’s production shuns any historicist or authentic recreation but devises its own concept for the tragic ancient Greek myth, just as Cavalli and Moniglia’s original creative impulse was not simply to re-enact such a legend faithfully but to include elements of early-Baroque dramaturgy, such as colourful, fantastic spectacle, the comic male-in-drag figure of Berenice, and a happy ending. 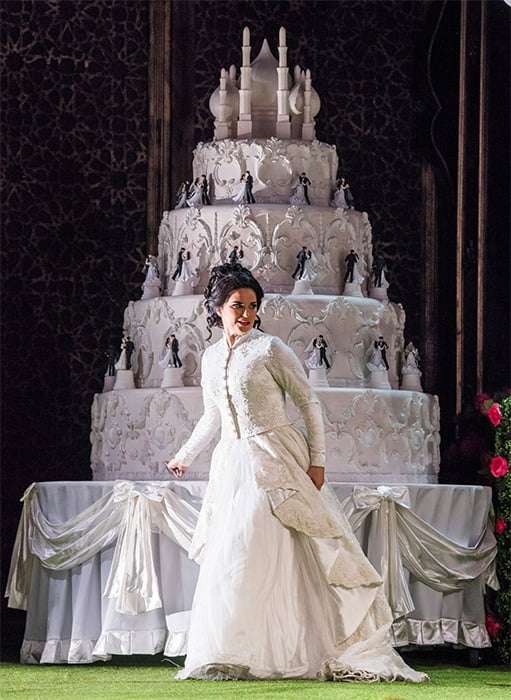 In the myth, Danao, King of Argos, seeks to avert a prophecy that he will lose his life at the hands of one of his daughters’ fiancés by marrying his fifty daughters to the fifty sons of his brother, Egitto, and ordering them to slaughter their husbands. Hipermestra alone fails so to do as she falls genuinely in love with Linceo, but he then prosecutes war upon his uncle, inevitably leading to the latter’s death. After a series of misunderstandings, Hipermestra and Linceo are reunited, demonstrating the power of love to transcend warfare and tragedy.

Vick’s production sets this in the contemporary Middle East, perhaps to make more logical sense of the Danaids’ arranged marriages – ritually enacted during the Overture by the procession of the couples across the stage, some of whom had previously passed among the champagne-quaffing audience immediately before – and the backdrop of conflict, which appears to have as much to do with oil as Linceo’s desire for revenge. The references to that industry, with the use of at-work engines and a petrol pump to be seen, bear more than a passing resemblance to one aspect of Frank Castorf’s ‘Ring’ cycle currently in production in Bayreuth, but here they are used as visual motifs rather than to make any wider political or social point. The war-torn ruins comprising the set for Act Three are also left to speak for themselves and so, except for the comically-dramatic rescuing of Hipermestra as she hurls herself from a height in despair, the denouement is rather static in failing to draw together the questions which have been previously raised in this production.

The common notion of marriage as a sort of punishment or abrogation of freedom is nicely overturned with the erotically-charged exchange between Hipermestra and Linceo near the beginning, and the bedroom scene of their wedding night shortly after, as their sincere union disrupts the expectations which others have of them. But these frolics perhaps sit uneasily in the context of Arab austerity and Puritanism, and, for some, Berenice’s stepping out from a burqa before launching into ‘his’ ribald and earthy comments upon the action might seem culturally insensitive. In other respects, however, the integration of high and low, and of tragedy and comedy, is efficiently handled and woven seamlessly into an intelligible and psychologically plausible drama.

However, it is the musical performance which makes this production memorable, founded upon William Christie’s lively realisation of Cavalli’s score, which he directs from one of the two resonant harpsichords in the ensemble. 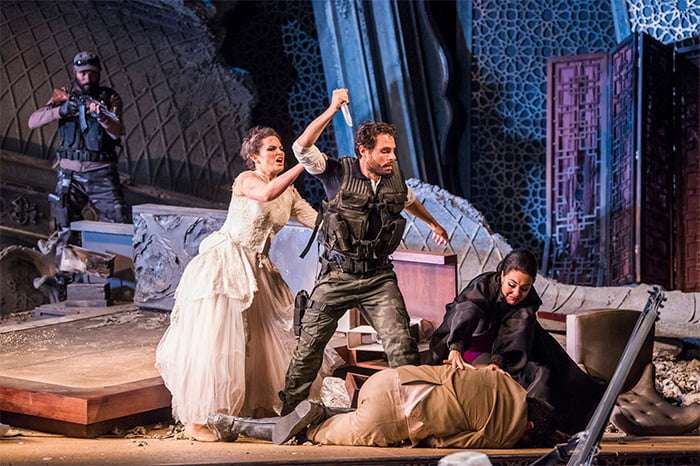 Consisting of nine other members of the Orchestra of the Age of Enlightenment, alongside Christie, it is thought to be the smallest orchestra ever to have appeared at Glyndebourne, yet offering remarkable variety in terms of timbre and rhythmic engagement with the music, bringing to life what would otherwise seem to be the subdued or limited range of expression of Cavalli’s musical language. It is in fact a powerfully direct form of setting, which builds upon the example set down by Monteverdi in his masterpieces, and the contributions of Kati Debretzeni and Huw Daniel on violins add further colour and texture in moments of heightened drama or in interludes between episodes.

Particularly moving was the lament from Debretzeni at the beginning of Act Three, sounding more like Biber, but emphasising the tragedy of the waste of war. The ensemble also adds conspicuously to the drama as it performs in costume in a pit to which steps connect to the main stage, enabling the musicians to take part in the action, or for the singers to move down among the musicians – most notably when Berenice goes to jest with Christie.

Emőke Baráth leads the cast, at first sounding tentative with a slight wobble in her voice, but coming to sound more quietly determined, though still vulnerable, during the course of the drama as she works through her conflicting duties to her father and lover respectively. Raffaele Pe was more consistently assured in the latter role, Linceo, with his well-rounded though fairly soft countertenor voice ranging fluidly and flexibly over Cavalli’s often-ebullient writing. Furthermore he acted with attractive allure which made him a credible romantic hero, even despite his faltering confidence in Hipermestra’s fidelity, believing Arbante’s slanders instead. In that role Benjamin Hulett was fresh-voiced and expressive, but missed the character’s strain of duplicity and evil as he hatches his plot against Hipermestra following her refusal of his amorous advances. 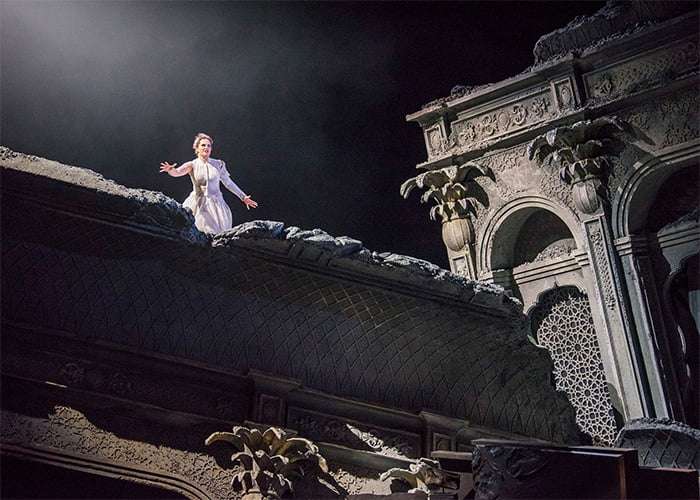 Ana Quintans brought more vigour and ardour to the part of Elina as she bemoans her initially unrequited love for Arbante and supports Hipermestra in her ordeals, whilst Renato Dolcini demonstrated similar conviction as Danao, both in meting out punishment upon his disobedient daughter and in confronting courageously the death he had so desperately sought to elude, which takes place as the sudden conclusion to Act Two without musical accompaniment or any comment.

Mark Wilde and Anthony Gregory provided contrasting levity as Berenice and Vafrino respectively. Wilde was witty without resorting to caricature and remained musically secure, though highlighting the points of comedy as necessary. Gregory’s role was a less effervescent counterpart to that of Berenice but he kept up his own genial humour that was by no means a pale imitation of his colleague.

If the music carries greater urgency than the production, their combination here still reveals the viability of Cavalli’s work centuries later, not least in showing that such an opera is inhabited by flesh-and-blood characters, a testament to the composer’s dramatic genius, and mounting it now also pays oblique tribute to the legacy of his great teacher, Monteverdi, in the very month which sees his 450th-anniversary, thereby tapping into a seminal tradition that looks back to the past as much it inspired the future development of opera.