Skip to content
LnRiLWNvbnRhaW5lcltkYXRhLXRvb2xzZXQtYmxvY2tzLWNvbnRhaW5lcj0iNmIzNDMzNmNmZTc3NWZiNGJlMTVjMmIwMzU3NWM1MjYiXSB7IHBhZGRpbmc6IDI1cHg7Ym94LXNoYWRvdzogNXB4IDVweCAxMHB4IDAgcmdiYSggMCwgMCwgMCwgMC41ICk7Ym9yZGVyOiAycHggZG90dGVkIHJnYmEoIDEwOSwgMTA4LCAxMDgsIDEgKTsgfSAudGItZmllbGRbZGF0YS10b29sc2V0LWJsb2Nrcy1maWVsZD0iODM3Y2ExZjc0MGRjZDdkOTdlMzQzOWMyYjIwMWZmZTMiXSB7IGJhY2tncm91bmQtY29sb3I6IHJnYmEoIDIzOCwgMjM4LCAyMzgsIDEgKTtwYWRkaW5nLXRvcDogMTBweDtwYWRkaW5nLWJvdHRvbTogMTBweDtwYWRkaW5nLWxlZnQ6IDEwcHg7IH0g
LnRiLWNvbnRhaW5lcltkYXRhLXRvb2xzZXQtYmxvY2tzLWNvbnRhaW5lcj0iNmIzNDMzNmNmZTc3NWZiNGJlMTVjMmIwMzU3NWM1MjYiXSB7IHBhZGRpbmc6IDI1cHg7Ym94LXNoYWRvdzogNXB4IDVweCAxMHB4IDAgcmdiYSggMCwgMCwgMCwgMC41ICk7Ym9yZGVyOiAycHggZG90dGVkIHJnYmEoIDEwOSwgMTA4LCAxMDgsIDEgKTsgfSAudGItZmllbGRbZGF0YS10b29sc2V0LWJsb2Nrcy1maWVsZD0iODM3Y2ExZjc0MGRjZDdkOTdlMzQzOWMyYjIwMWZmZTMiXSB7IGJhY2tncm91bmQtY29sb3I6IHJnYmEoIDIzOCwgMjM4LCAyMzgsIDEgKTtwYWRkaW5nLXRvcDogMTBweDtwYWRkaW5nLWJvdHRvbTogMTBweDtwYWRkaW5nLWxlZnQ6IDEwcHg7IH0g
Handel
Saul – Oratorio in three Acts to a libretto by Charles Jennens, based on the two Books of Samuel [sung in English, with English surtitles]
LnRiLWNvbnRhaW5lcltkYXRhLXRvb2xzZXQtYmxvY2tzLWNvbnRhaW5lcj0iNmIzNDMzNmNmZTc3NWZiNGJlMTVjMmIwMzU3NWM1MjYiXSB7IHBhZGRpbmc6IDI1cHg7Ym94LXNoYWRvdzogNXB4IDVweCAxMHB4IDAgcmdiYSggMCwgMCwgMCwgMC41ICk7Ym9yZGVyOiAycHggZG90dGVkIHJnYmEoIDEwOSwgMTA4LCAxMDgsIDEgKTsgfSAudGItZmllbGRbZGF0YS10b29sc2V0LWJsb2Nrcy1maWVsZD0iODM3Y2ExZjc0MGRjZDdkOTdlMzQzOWMyYjIwMWZmZTMiXSB7IGJhY2tncm91bmQtY29sb3I6IHJnYmEoIDIzOCwgMjM4LCAyMzgsIDEgKTtwYWRkaW5nLXRvcDogMTBweDtwYWRkaW5nLWJvdHRvbTogMTBweDtwYWRkaW5nLWxlZnQ6IDEwcHg7IH0g 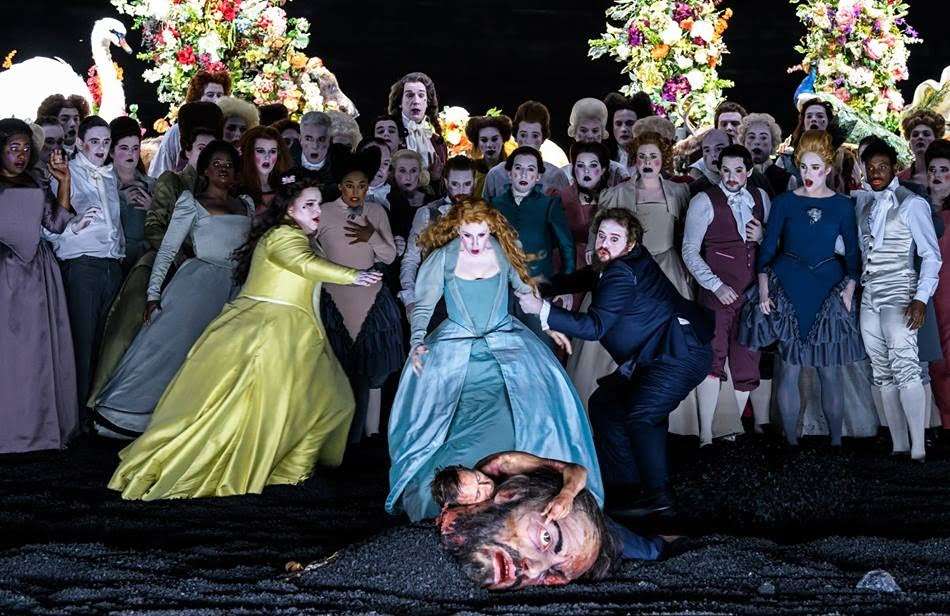 Conducted with period panache and punch by Laurence Cummings (who led the 2015 Glyndebourne Tour of the production), Barrie Kosky’s colourfully detailed staging of Handel’s Saul makes a relatively speedy return to the Glyndebourne Festival and can be greeted as a long-lost friend. Mind you, Kosky engineers things (with a little help from Handel, of course) to have audiences eating out of his hand by producing an opening number of such breathtaking splendour that many, I suspect, would have been happy to return home after the first twenty minutes or so.

It’s as if Handel had simply utilised the climactic chorus from a different oratorio altogether (David and Goliath, perhaps) as a springboard to kick-start a new oratorio. Kosky enhances the notion by feasting the eye just as much as Handel feasts the ear in the chorus’s opening gambit, “How excellent they name”, with the singers adorning a laden table, the width of the stage, festooned with flowers and stuffed birds. In front of the steeply raked stage, covered with dark pellets, is Goliath’s severed head, blinded in one eye, staring dolefully over the orchestra pit, appearing out of the gloom which allows the Overture to speak for itself. The riot of colour as the curtain rises plunges us straight into the action. 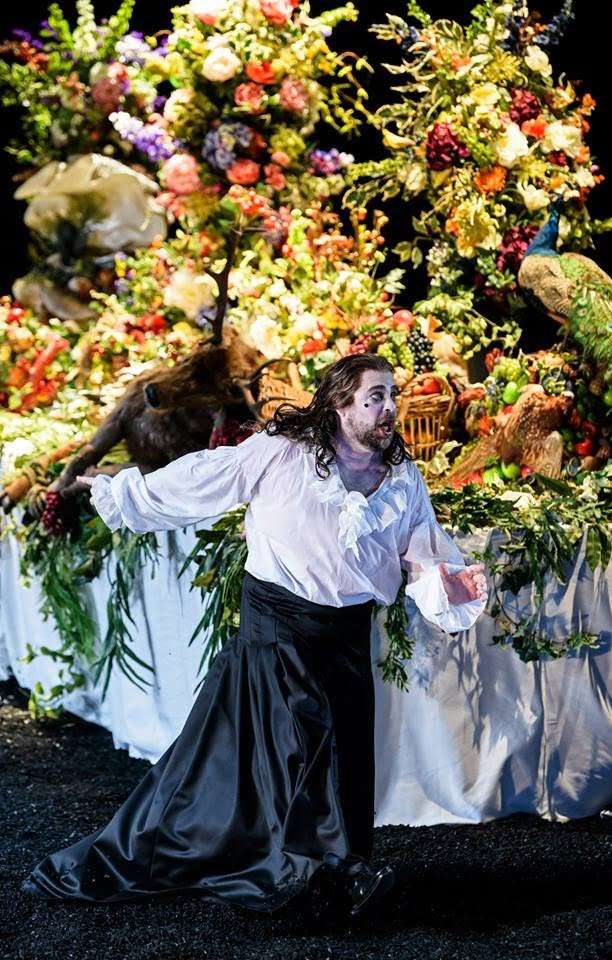 After that scene, Kosky employs the simplest of devices to deepen the tragic tale of Saul’s dysfunctional family and his growing envy of David’s popularity: the occasional additional vocal interruption – a screech of joy here, of anguish there and occasional repeated muttering, particularly from Markus Brück’s tortured Saul (“I am not mad…”, “I am King … I am King”). These illumine the drama to make it more intense without upsetting the musical values. And then there are the six dancers, with inspired choreography from Otto Pichler, who epitomise the joyousness of Handel’s ceremonial music. Even at the start of the third part, where the tone has changed and the dark stage is lit only by hundreds of candles, a sense of fun remains, in the sudden appearance – Wurlitzer-like – of James McVinnie, periwigged and frock-coated, playing the organ solo from the stage, forever circling, with the dancers (now more sombrely in black) slowly gyrating behind.

In a production of such a succession of wonderful visual images, Kosky doesn’t neglect his principals, or the chorus. As one of only two returning members of the cast, Iestyn Davies is phenomenal as David, his purity of tone matched by expressive acting that exudes a spiritual man caught up in an all-too-human situation. The other return is John Graham-Hall, appearing as the Witch of Endor, emerging from the earth as if being birthed by Saul. With his aged, hanging dugs he feeds Saul milk, helping Brück transform into the Apparition of Saul in a scene that reminded me of mad Lear and blind Gloucester in Shakespeare’s great tragedy. 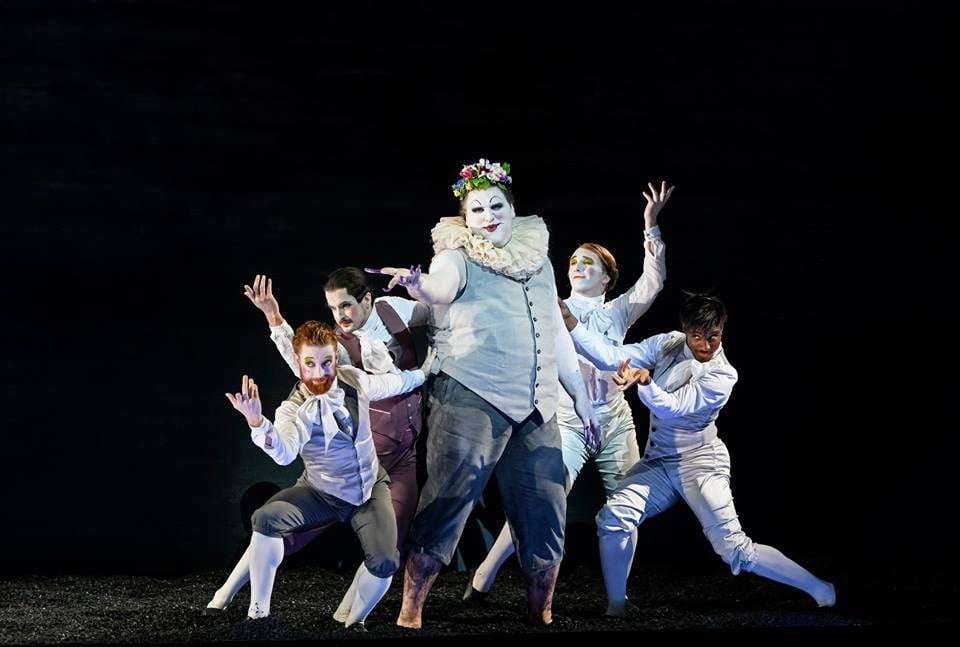 The newcomers bring insight and intensity to their roles, Brück negotiating Charles Jennens’s libretto with clarity and commitment and revelling in Saul’s descent into envy and madness and, ultimately, self-destruction. Allan Clayton is an ardent and open-hearted Jonathan, while Karina Gauvin is imperious as Merab, Saul’s daughter first offered in marriage to David who rejects him as he is low-born, and Anna Devlin as a deliriously skittish Michal (which she had sung in the Tour). Towering over them all is Stuart Jackson’s “lord of misrule” composite of characters, his wild, wide-eyed grimace and six-inch-long fingernails curving dangerously, commanding attention, even when singing from the stalls (as Amalekite).

To complete the team, with contributions that perhaps top all the rest, was the Glyndebourne Chorus and the Orchestra of the Age of Enlightenment, raising the rafters and plucking the heart-strings to the manner born, literally so in Joy Smith’s harp solo, while Bernard Robertson’s carillon contribution will almost certainly be ringing in ears for days. Cummings keeps the whole buoyant and the production is utterly brilliant.