Orchestra of the Age of Enlightenment
Ryan Wigglesworth

This new production of Die Zauberflöte is extravagantly designed and directed by André Barbe & Renaud Doucet, making their Glyndebourne debut.

It’s a highly imaginative affair, chock-full of spectacle with keen attention to detail, bringing with it an excess of effects that invade the eye to the point of distraction and a resulting absence of any lasting impact. Ultimately, it’s a case of design trumping drama with few demands made on acting let alone sentiment.

I felt swamped by the over-the-top pantomime/television-inspired concept (MasterChef meets Downton Abbey) which trivialises the creative genius of Mozart and Schikaneder, the narratives on morals, misogyny and power (amongst others) submerged by a constant need to claim attention for clever puppetry that periodically arrests the eye.

Barbe & Doucet have set this Magic Flute in a swanky Edwardian hotel, the grand residence seemingly of both Tamino and the Queen of the Night, peopled by sepia-coloured cardboard clientele within pen-and-ink-style flats. We move from an expansive lobby where we first encounter Tamino in pyjamas escaping the clutches of a writhing monster (designed from recycled plates) through to the cellared domain of Monostatos and the captive Pamina (bats stencilled on the ceiling) and on to kitchens where Sarastro as head chef presides over a brotherhood of cooks sporting luminous hats. It all moves swiftly along until a bizarre scene in Act Two with an omelette-making Papageno and a drinks-proffering Speaker when the music grinds to a halt and it’s anybody’s guess what’s going on. 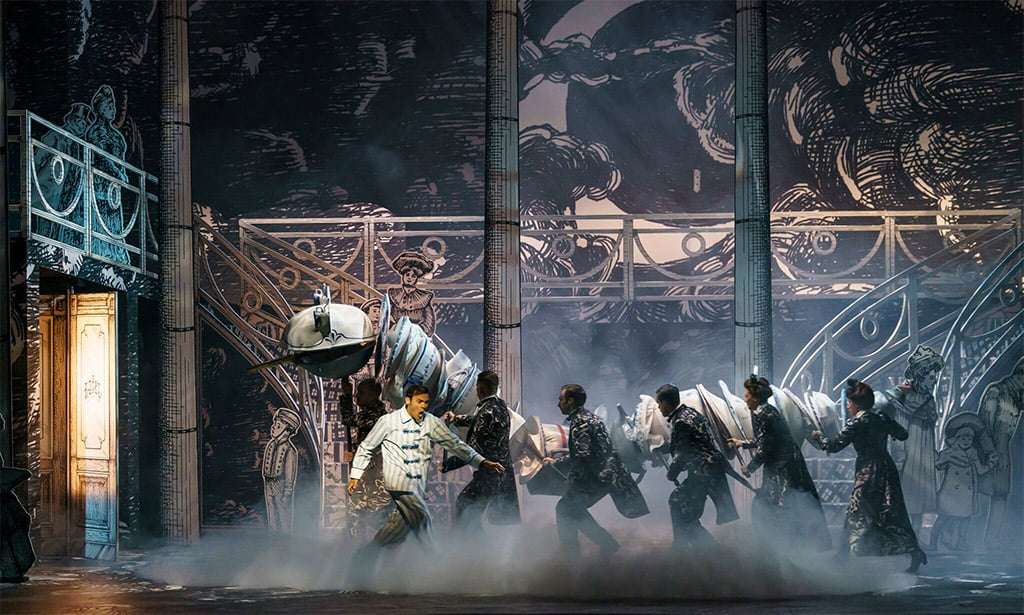 There’s no denying this show is a gourmet visual feast and brilliantly inventive too –Papageno’s birds are fashioned from ‘flying’ pillows, tinkling bells magically bring to life a dismembered pig, and giant metal puppets serve as two Armed Men redolent of something vaguely sinister from H. G. Wells. There’s even a vegetable man evoking Arcimboldo’s Renaissance portraits: all part of a ceaseless creativity that delights and intrudes simultaneously.

Casting is variable but with just enough standout moments vocally to bring relief. The Grand cru of these performances is Brindley Sherratt as a cavernous Sarastro, a voice of luxurious depth, ‘O Isis und Osiris’ saturated with authority and benevolence. Sofia Fomina is a doey-eyed and clear-voiced Pamina whose despairing ‘Ach, ich fühl’s’ is the expressive high-water mark, delivered mercifully without directorial intervention. Her duet with Björn Bürger’s Papageno is handsomely sung, but do we really need puppets and silent members of the chorus to express its sentiments or do the directors not credit us with imaginations and intelligences of our own? 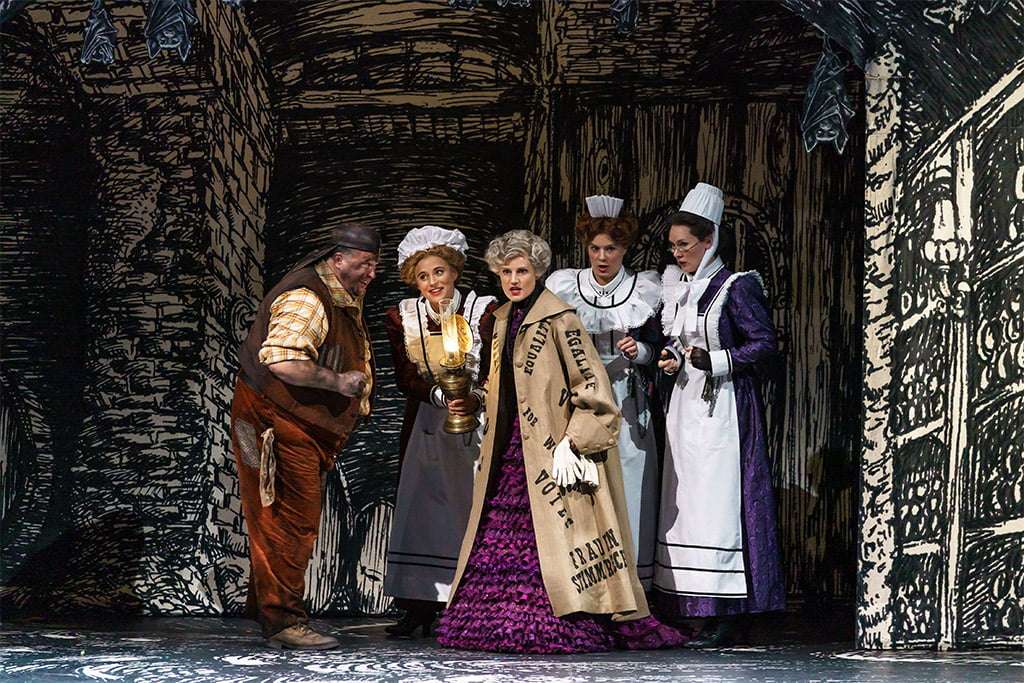 Leading the cast is David Portillo as a bright-toned Tamino, not quite the heroic husband-to-be for Pamina whose mother, the Queen of the Night, Caroline Wettergreen, takes us from defeat to defiance but went a step too far and flame-grilled her rage aria. Jörg Schneider is a boorish rather than vile Monostatos, and Michael Kraus persuades as the Speaker (hotel sommelier), as do a trio of chamber maids Ladies and the Boys as Tamino’s tuneful guides.

Conducted by Ryan Wigglesworth the Orchestra of the Age of Enlightenment gives stylish support, coloured by mellifluous woodwinds and an enthusiastic timpanist, although some slow tempos drain the music of energy. This production parades invention over feeling. I came away reeling from spectacle and emotionally short-changed. You’ll love it or hate it.