Handel
Rinaldo – Opera in three Acts to a libretto by Giacomo Rossi after Torquato Tasso’s Gerusalemme liberata [sung in Italian, with English surtitles]

Orchestra of the Age of Enlightenment
Maxim Emelyanychev 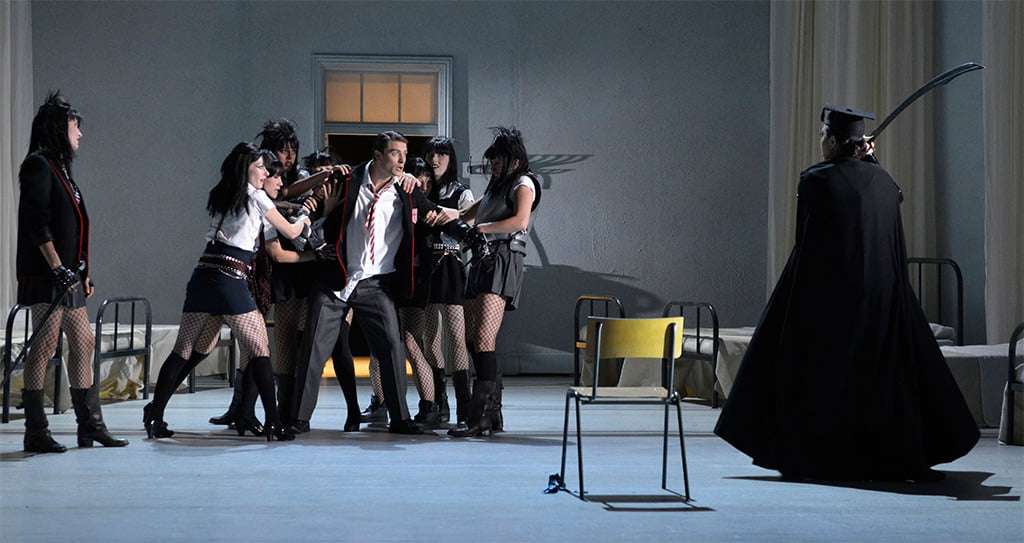 Needless to say, and lazily titillating as all that may be, it has very little to do with Handel, his librettist, or the celebrated literary source upon which the opera is based, despite the lesson we are supposed to consider at the outset, whether the first crusaders were motivated by religious idealism or political revenge. Any Church historian can point out that religion and politics cannot be separated out in the mediaeval worldview, so that issue cannot be resolved in terms of the simplistic dichotomy into which the modern secular mind breaks down the question, and neither does the production try. Nor does it really make a coherent point as to whether either such religiously-orientated warfare is the projection of a destructive, delinquent urge to imagine enemies and vanquish them, or if religion should be read back as little more than a system of magical, surreal phenomena with no grounding in reality. 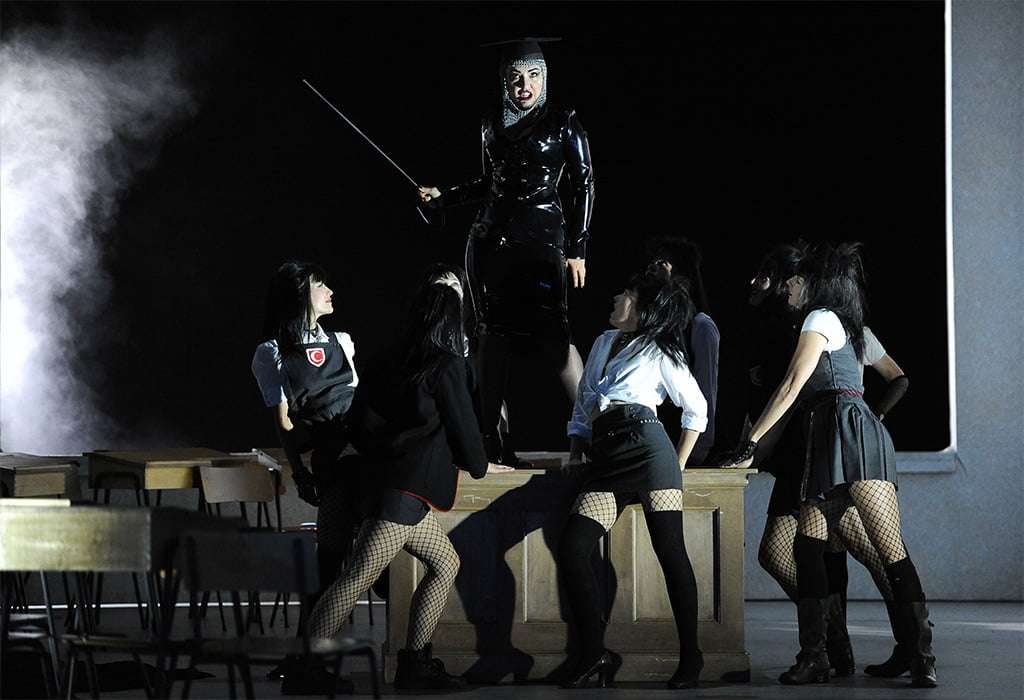 Certainly there are some neat theatrical effects, such as the simulation of real birds for Almirena’s delightful aria ‘Augelletti, che cantate’, and Rinaldo literally taking flight in his ‘Venti, turbini’ on a bicycle (after the intervention of clapping from an audience which had not realised that a da capo aria comprises a repeat of the first section), riding across the full moon at night, in reference to the film E. T. The sulphurous vision of Hell which Armida conjures up to ward off the crusaders takes place in the school’s chemistry laboratory as various potions are explosively concocted; and the showdown at the end is a comically inept ballgame in the encaged playground. But the overall concept and the compulsion to cast a specific directorial slant upon the work reduces the organic exuberance and multi-faceted nature of Baroque theatre (which can hold fantasy, high emotion, and variety in a seamless whole, however artificial) just as the Renaissance epic, such as Gerusalemme Liberata, could integrate contrasting and contradictory episodes and world views in an overarching allegorical whole. Recent productions of Belshazzar and Agrippina by The Grange Festival, for example, have shown how a consistently insightful idea can be fruitfully counterpointed with Handel’s original.

This revival has taken on an apparently additional alluring dimension in that, as some media excitably reported, the break-dancing countertenor Jakub Józef Orliński stepped up to assume the title role after Elizabeth DeShong dropped out. He is, of course, an absolutely accomplished singer, who happens to pursue that particularly athletic form of street dance outside of the opera house and concert hall. Incidentally those skills are not called upon here, despite some nimble choreography required in the imagined classroom sequences. His cool and even singing across his range proves to be an asset here, even if it does not evince an especially heroic account of the role, as he brings out the character’s human and vulnerable aspects, whilst also constituting the steady and central focus of the music’s diversity. 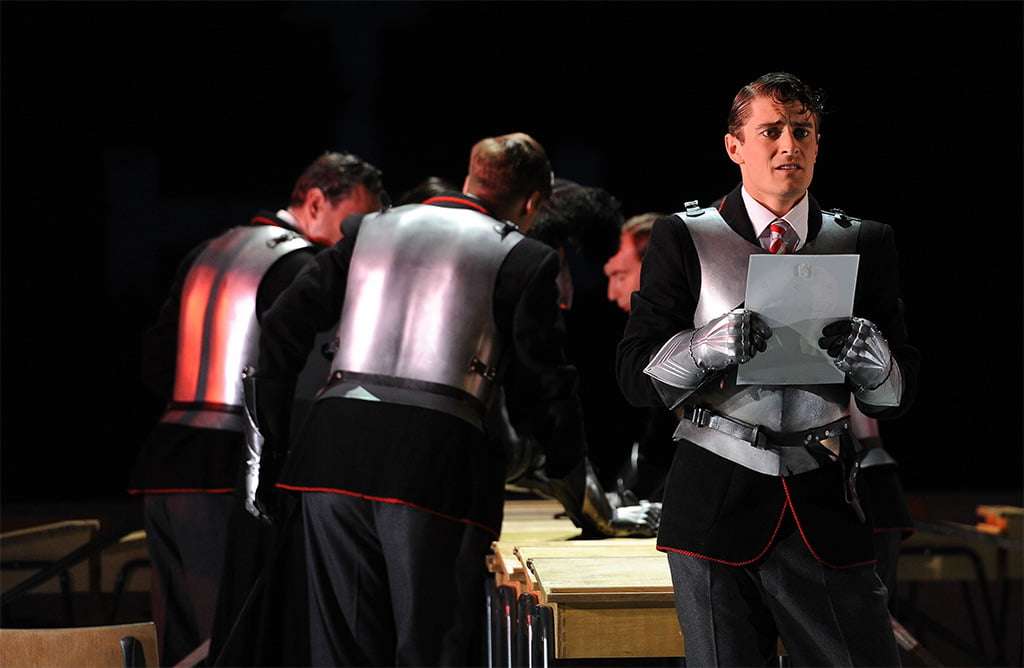 In fact the performance is consistent and intelligible very much in its musical terms. If Giulia Semenzato is slightly unsteady at first as Rinaldo’s lover, Almirena, she grows into the role with quiet and winning assurance. Her father, Goffredo, the leader of the Christian knights, finds a secure and incisive interpreter in Tim Mead, with singing that has a certain greater directness than Orliński’s, in this case as appropriate. Kristina Mkhitaryan is an impressively agile Armida, who achieves the vocal fireworks of Handel’s coloratura without strain or having to make a particular point of doing so. Brandon Cedel is a touch over-stretched in his first aria as Argante, in needing to make a forceful impression, but in his following aria, revealing his love for Armida, he demonstrates his vocal versatility with its tender lyricism. In the third countertenor role, Eustazio, Patrick Terry is musically colourful and alive as Rinaldo’s dependable friend, having taken over the role which Orliński would have sung.

Maxim Emelyanychev sustains a fairly sober, but never staid, account, the Orchestra of the Age Enlightenment largely avoiding bold Affekt in the arias or excessive contrast, such that the strings could sometimes be brighter than they are already, or the virtuosic harpsichord interludes in Armida’s ‘Vo’ far guerra’ could be more extrovert (especially as they accompany her ravings on discovering that Argante has turned his attentions to Almirena, and the more extensive transcriptions of Handel’s own apparent improvisations here which survive might have been used profitably). Oboes and bassoons also wheeze somewhat in another of her arias, ‘Ah crudel! il piano mio’. But trumpets and timpani make an arresting effect elsewhere, and overall the OAE brings out the drama and tension of the music.

Whether or not the production appeals, the music certainly remains marvellously intact, and Emelyanychev demonstrates a robust grasp of it.