The Orchestra of the Age of Enlightenment
William Christie 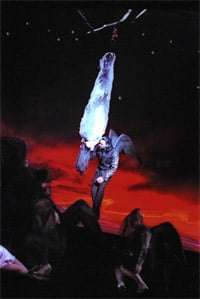 “Hark! now the echoing air a triumph sings…” as Lucy Crowe warbles in the ‘Masque of Marriage’ which closes “The Fairy Queen” – indeed it does, this first-time-at-Glyndebourne staging of Purcell’s semi-opera an absolute success in Jonathan Kent’s spectacular production, wonderfully demonstrating what Ben Jonson called “The Eloquence of Masques.”

“The Fairy Queen” is no stranger to the English stage in modern times, but previous productions have either curtailed or omitted the text – English National Opera for example opted for the latter and it worked superbly. Glyndebourne’s however not only uses the anonymous adaptation of “A Midsummer Night’s Dream” but also reinstates parts of Shakespeare’s original, the dialogue spoken by actors who project the words as though they are at the Royal Shakespeare Company – and how good it is that the director did not feel it necessary to dumb-down any of the language – what, “stichomythia” on the operatic stage; surely you jest? No, and there was much more to savour in the performance style.

William Christie has made baroque opera his own in this house. The Orchestra of the Age of Enlightenment played superbly for him, creating a sense of intimacy yet spaciousness; this was not a small band in Purcellian terns, yet the sound was surely what Purcell would have wanted in its balance between theatricality and lightness. The showiness in the production was elegantly supported from the pit, with music such as the opening bars of ‘Come all ye songsters’ establishing the mood with perfect grace.

The framework for the production is a classically opulent 17th-century room, the glass cabinets stuffed with the spoils of a ‘Grand Tour’ and the backcloth an ever-changing sky seen through full-length windows – the cabinets later crowd with life as the fairies use them to effect their passage from the ‘real’ to the faery domain. The staging makes superb use of devices such as the revolve and the adapted trapdoor, with brilliant effects such as Titania’s apparent sleep in a cocoon of spider’s web achieved with the help of Paul Brown’s evocative lighting, and the glorious appearance of Phoebus in his chariot contrasting with the more domestic surprise of Theseus mounted on a full-size horse at the moment of judgement.

In some ways, the singing almost becomes incidental in the face of such constant display, but the vocal acrobatics of, say, a Handel opera in which a character undergoes a crisis in an aria and then moves on, are not really required here. The cast was mostly house debutants, young and baroque specialists who understand the need to present each set-piece almost as a story in itself. Lucy Crowe sang with sweet tone and needle-bright accuracy, ‘Now the night’ and ‘Thrice happy lovers’ particularly successful, and the ever-reliable Andrew Foster-Williams presented characterful portraits of Winter and Hymen, with a finely sung ‘See I obey’. Carolyn Sampson sang movingly in her ‘Plaint’ and she was a convincing Night in ‘See even Night herself is here’. 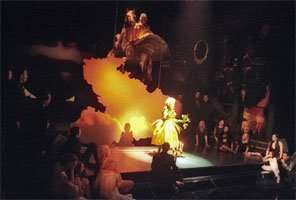 A little less impressive were Ed Lyon who has some of the most difficult music in ‘Come all ye songsters’ and ‘Thus the gloomy world’, and although he enunciated the words crisply there was a need for more definition and volume, and Claire Debono did not always make her words tell. Lyon and Sean Clayton were at their best in the duet ‘Let the fifes and the clarions,’ and Robert Burt was a very funny Mopsa, bravely appearing as an hilarious Thisbe in the final act despite having torn a ligament on exiting from his haystack in the earlier scene.

From the gales of laughter that erupted at almost every line, maybe this was perhaps the first acquaintance of some of the audience with “A Midsummer Night’s Dream”? After all, a line such as ‘His eyes were green as leeks’ is funny, but not that funny, or did the constant laughter derive from the sheer joy of the overall experience, lubricated by champagne? Titania usually elicits a muted ripple of chuckles at ‘What angel wakes me from my flowery bed?’ but here Sally Dexter’s Queen of the Night got a positive round of guffaws – as for Desmond Barrit’s Bottom, laughter was unstinting. We were not, however, sufficiently relaxed to respond positively to William Christie’s attempt to repeat the final chorus with audience participation in karaoke style – I would love to know if there are nights when the audience does sing!

When the work was first performed in 1692 it almost bankrupted the Dorset Garden Theatre, and if the original employed only half of the “exotick” devices of Glyndebourne one can see why. With a Sun God descending in full glory, a lily-pad pond, a golden Adam and Eve beside a golden Tree of Knowledge looking as if all had stepped from a 17th-century sampler and that whole warren of fluffy pink and white rabbits busily bonking away, not to mention the unkindness of raven-like, black-clad fairies, we had everything to delight the eye and stimulate the imagination.

Beside this was the chief joy of the production: the wholehearted acceptance of the facts that baroque grandeur has a place on the operatic stage and that it can successfully be juxtaposed with outrageous whimsy. Handel’s biographer, John Mainwaring, might have regarded such entertainment as “foolish and absurd beyond imagination” but this “Fairy Queen” encourages us to suspend our disbelief for a few hours, to magical effect. If you can’t get to Glyndebourne, you can see the production semi-staged at the Proms on Tuesday 21 July – highly recommended.