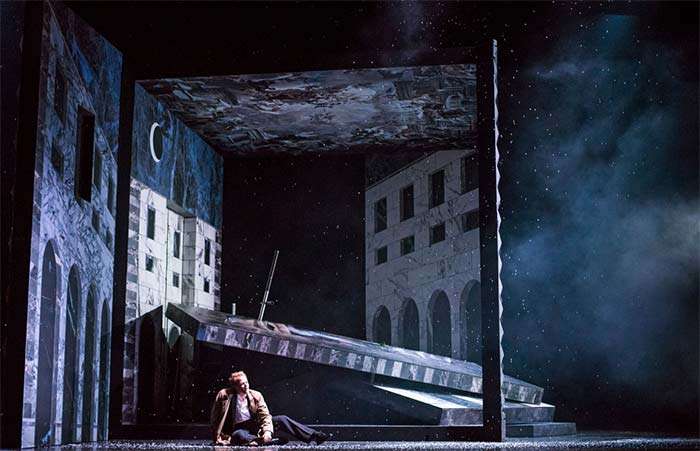 Jonathan Kent’s production of Don Giovanni – revived for Glyndebourne’s Tour season – makes for an interesting comparison with Richard Jones’s production recently mounted by ENO. Whereas the action of the latter moves restlessly through the doors of the set, constantly offering the Don the means to escape (and ultimately eluding the clutches of the Commendatore), Kent’s vision is more claustrophobic, closing in on the moment when Giovanni eventually succumbs to the Commendatore’s revenge.

The set is focused upon a boxed-in room which can rotate to display the rusticated exterior of Don Giovanni’s palace, or the suggestive image of a Mannerist memento mori portrait of a lady torn between the dictates of virtue in her upward glance to the light, and the temptation to enjoy pleasure now whilst life lasts, with the constant reminder of mortality brought to bear by the skull lying under her hand even as such indulgence may also result in the terrible end which Don Giovanni encounters.

The set also opens up in various guises according to the dictates of the scene – alternately the interior of Giovanni’s palace, the church that is the scene of the Commendatore’s funeral rites, or the streets, already lying under the shimmering light of a crescent moon. The ambience becomes increasingly dark, however, leading up to the graveyard scene and Giovanni’s fatal last supper, which takes place over the same sloping platform through which the Commendatore emerges, zombie-like, from a fissure in the ground, just as he did from his tomb earlier. One wonders whether that crevice is also meant to suggest the female genitalia which has lured the Don to the excessive self-indulgence that calls down the furious response of virtue. 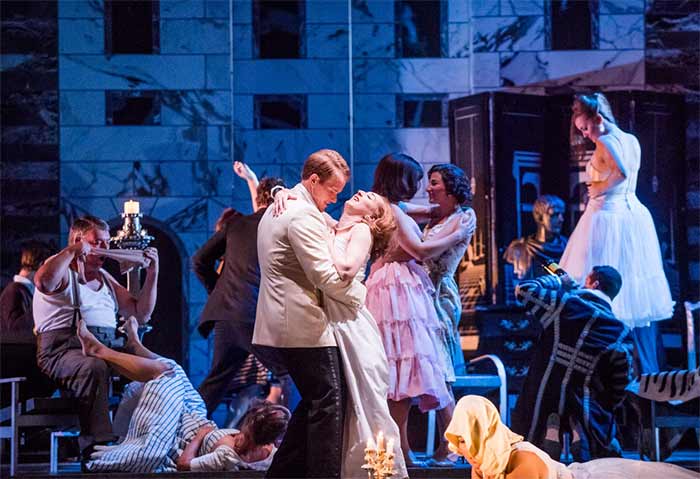 At any rate, the production does away with the improbable supernaturalism of the half-alive statue, and the sensationalism of Giovanni’s damnation is downplayed as, after he is led away stoically into smoky flames, in the final scene his dead body remains visible for the remaining characters to draw out the moral. Sometimes when the set is closed up and the others remain outside in the liminal spaces the production feels temporarily static. But in other respects it is reminiscent of Barrie Kosky’s paradoxical “extravagant minimalism” in which the variety and fluidity of the action is colourful and alert, and also immediate through its being bounded by clear, empty parameters which limit any meaningless sprawl, so that the overall balanced result contrasts neatly with Giovanni’s excess.

Pablo González’s conducting was somewhat more wayward. It takes inspiration from ‘period’ performance practice with a general lack of vibrato, relatively brisk tempos, and valve-less brass. Certain passages were a hasty canter which lacked some gravitas, such as the Overture and the banquet scene with the Commendatore’s appearance; or Donna Anna’s aria ‘Or sai chi l’onore’ which might have been more fearsome. But that propensity to urgency brought a galvanising energy to ensembles such as the Finale of Act One, or Act Two’s sextet, whilst at the other end of the emotional climate, there was a beguiling simplicity to the cellos’ accompaniment to Zerlina’s ‘Batti, batti’.

The singers formed a strong, well-characterised cast, headed by Duncan Rock’s suave Don Giovanni – rather than a figure of vulgar self-assertion, the mellow tone of his singing told all the more in the character’s favour in numbers such as ‘Là ci darem la mano’ or the ‘Champagne’ aria to express the captivating power he might have over so many women. As his put-upon servant Leporello, Brandon Cedel provided musical dependability and wit, if somewhat light of voice at times, though certainly capturing the character’s down-to-earth nature. Magdalena Molendowska successfully realised the complicated feelings and motivations of Donna Elvira in which she convincingly wavered between vengeful rage, as a result of Giovanni’s treatment of her in ‘Ah, chi mi dice mai’, and lingering devotion to him elsewhere. 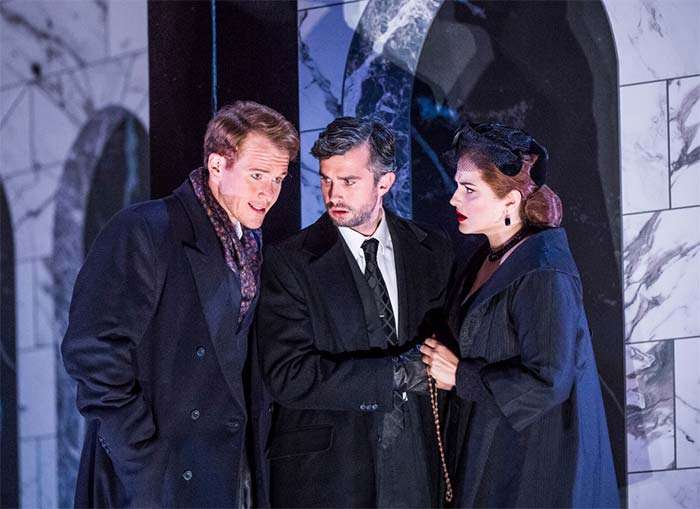 The Donna Anna and Don Ottavio of respectively Ana Maria Labin and Anthony Gregory were well matched, the latter sounding lustrously dignified in his declaration of love ‘Dalla sua pace’, contrasting profoundly with the swagger of Giovanni’s amorous protestations. Labin’s singing was attractive, if somewhat coy, and so underplayed some of Donna Anna’s fury. Louise Alder was a suitably coquettish and charming Zerlina, whilst Božidar Smiljanić’s Masetto was well executed though lacking in vibrancy.

Appropriately for the part of the Commendatore – most of which is sung from beyond the grave, as it were – Andrii Goniukov brought a haunting inscrutability that sounded as though it might, indeed, have issued from a world other than the here-and-now.

In essence this is a satisfying production with Glyndebourne doing what it does best in presenting a vivid, comprehensible interpretation of a classic opera with singers ideally matched to their roles, which will surely appeal widely to audiences as the Tour progresses.