Britten
Peter Grimes, Op.33 – Opera in a Prologue and Three Acts to a libretto by Montagu Slater after George Crabbe’s poem The Borough [sung in English] 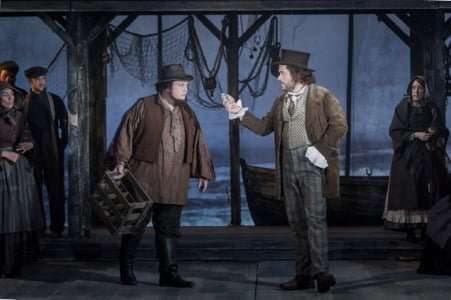 You might think, after the exhaustive Britten 2013 events, that Peter Grimes in particular could be left a while to consider his future. Grange Park Opera, though, has pressed Britten’s great outsider into service with opera polymath Jeremy Sams’s season-opening production, which dresses its unabashed nineteenth-century setting in vivid hyper-realism. Sams sets the scene with seagull cries filling the theatre as the audience took its seats, and the marine verismo was further enhanced by Andrzej Goulding’s video projections of the sea in all its moods seeming to splosh onto the stage. Literally elemental, perhaps, and over-egging what Britten embraced so completely in his music, yet Goulding’s direct imagery provided a powerful undertow, and his projection for the ‘Moonlight’ Interlude and the vanishing of Grimes and his boat at the end were stunning.

Francis O’Conor’s set of black clapboard shacks and net-towers was more Hastings than Aldeburgh, but it formed easily to enclose the Borough community in all its self-righteous spite or to move out of the way to get back to the dreary sea. Like the rides on Disneyworld, the sets and costumes – a sort of fishy Quality Street drab bonnet and Sou’wester alert – left little to the imagination. Then, telling us more than we strictly need to know, Sams goes on to illustrate the Sea Interludes with imaginary scenes from Grimes’s and Ellen’s childhood (acted out respectively by Charlie Boyd and Phoebe Venturi, with Steve East as a Grand Guignol fisherman Master) – Grimes was an abused apprentice, so he goes on to abuse his apprentices, and the dream of a future with Ellen was only ever a dream. 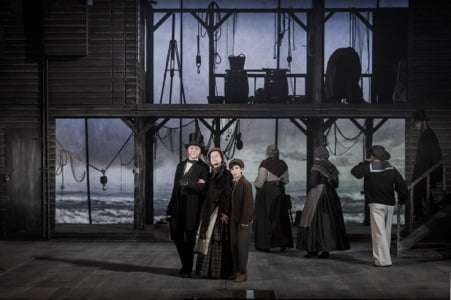 Sams rather paints himself into a corner with his expository realism, so it was down to the members of the cast to rough it up, which they did very effectively. The supporting roles were particularly strong, all of them singing it loud and proud for a very British type of character opera-acting. Stephen Gadd’s bluff, detached Balstrode did much to define the seething hypocrisy at work among the rest of the Borough folk. Gary Griffiths was an alarmingly predatory, powerfully sung Ned Keene, vigorously matched by Andrew Rees’s superbly two-faced Bob Boles. Clive Bayley gave a marvellous portrait of the equally slippery Swallow, all of them delivering with cinematic relish.

The relish rather tipped over into pantomime caricature with Rebecca De Pont Davies’s laudanum-crazed Mrs Sedley (one of Britten’s more broad-brush creations), rolling her eyes as if her life depended on it, shivering the Moot Hall’s timbers with her open-voiced “Murder most foul it is”, and carrying the weight of the Borough’s religious double-dealing every bit as effectively as Nigel Robson’s Rector.

The abuse theme continued into the spectral, tubercular-looking Nieces, dressed to die as much as to kill, and finely sung by Soraya Mafi and Rosie Bell. Anne-Marie Owens made her robust Auntie a smartly observed conflict between sympathy and survival. The women’s ‘quartet’, with Ellen, hit the emotional spot. 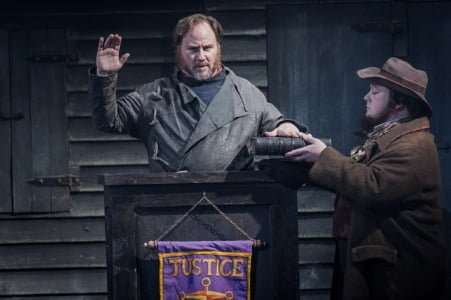 Georgia Jarman’s lovely soprano needed a bit of mezzo to give Ellen Orford more authority, and whether Sams intended it or not, I wanted her to be less supine, to get an idea that she’d risen above some of life’s difficulties. Carl Tanner was suffering from sinusitis, but he managed the gradations of tone in Grimes’s ‘Now the Great Bear’ with sure control. Very much in the burly mould of recent portrayals of Grimes, it took him a while to move into visionary gear, but his guard was satisfyingly down by the time he got to his ‘mad scene’. The Chorus packed an equally strong punch, and its shouts of “Peter Grimes” were properly poleaxing with Goulding’s projection going into overdrive.

Stephen Barlow drew punchy, abrasive attack from the excellent Bournemouth Symphony Orchestra, and the way he folded the score’s big moments into the flow of the drama was exceptional; Barlow really had the measure of Britten’s genius for creating character in music. His pacing of Acts Two and Three was faultless, and his handling of the ‘Passacaglia’ was as powerful as I’ve heard it, made all the more confrontational by the closeness of the acoustic. I reckon Grange Park has a winner on its hands.