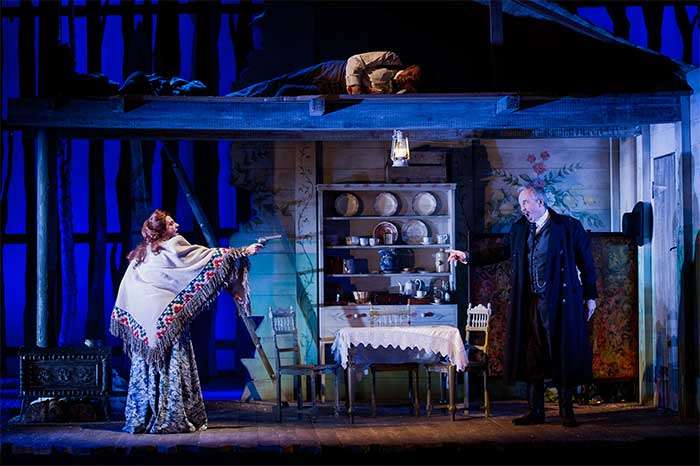 Grange Park Opera’s revival of Stephen Medcalf’s 2008 production of Puccini’s ‘Western’ opera certainly strikes gold for the way in which music, direction, and action all come together coherently and compellingly to tell a story about compassion and reconciliation.

Running like a leitmotif through the production are various references to gold, representing some desired object which may or may not satisfy such possessive yearnings – the gold-illumined bottles behind the bar in the mining camp; the barrel of gold guarded by Minnie in that Polka bar; or the ginger/gold hair of Minnie herself. Her and Dick Johnson’s retreat into the setting sun at the conclusion, on obtaining remission from punishment by the community of miners may be a cliché, but this is the far West after all, and it serves as a fitting climax to the succession of golden allusions. All through, the production remains faithful to the time of the 1849 ‘gold rush’ in California during which the drama is set.

In the midst of so much apparent allure it is telling that Minnie is – outwardly – a demure, dowdy figure which Claire Rutter projects winningly through her singing that is inwardly confident but far from strident. Her cabin is quaintly domestic and the audience might wonder what the attraction is that she holds for the bandit Johnson. Rather, it is her “heart of gold”, which probably only Johnson realises is not something that can be obtained by bartering or being gambled for, as the sheriff, Jack Rance, and the miners seem to think. 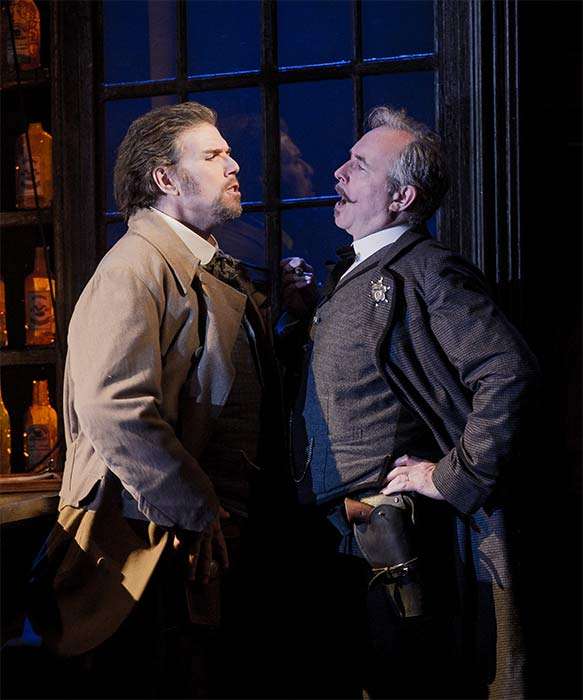 Lorenzo Decaro is not, perhaps, an overtly lyrical tenor, but that does not matter in this opera which essentially lacks any extended arias, and he brought out the layers of suffering and longing in the character of Dick Johnson. Neither Johnson nor Minnie is in the first flush of youth, and so the more nuanced qualities of Rutter’s and Decaro’s portrayals complemented each other well.

In contrast with them, Stephen Gadd as Rance sang eloquently, perhaps even eliciting some sympathy, as he brought out the character’s sense of emotional impotence in expressing a passionate yearning for Minnie which cannot, however, find fulfilment. Alberto Sousa was an amiable bartender as Nick, whilst Jihoon Kim sounded darkly mellifluous as Ashby, the agent who announces that Johnson the bandit is on the run.

Choreography in this production is alert and gripping, particularly in the Polka bar, where the miners play rumbustious card games, flirt with or quarrel over Minnie, or attempt to execute one of their number for cheating. Individually there is some fine singing, with some deliberately coarse vocal acting by Adam Tunnicliffe as Joe standing out. Together these parts combine to make for a powerful, fine-toned chorus in ensemble sequences.

Driving the dramatic tension was Stephen Barlow’s urgent direction of the Bournemouth Symphony Orchestra. Right from the brief, powerful prelude, Barlow secured a symphonic sweep from the BSO, with Puccini’s continuous score unfolding in clearly structured sections and the various themes subtly but unmistakably pointed up so that the music delineated the drama as much as the action. As with the LPO at Glyndebourne, it makes all the difference in using an established orchestra, used to playing together regularly in the wider repertoire.

With no particular points of the director’s own this production speaks all the more directly and powerfully. But it should also convince those who might otherwise find Puccini’s dramas mawkish or the concept of a Western as the subject for opera a strange one, that the work has all the psychological, moral, and even theological depth of the greatest works of the theatre.