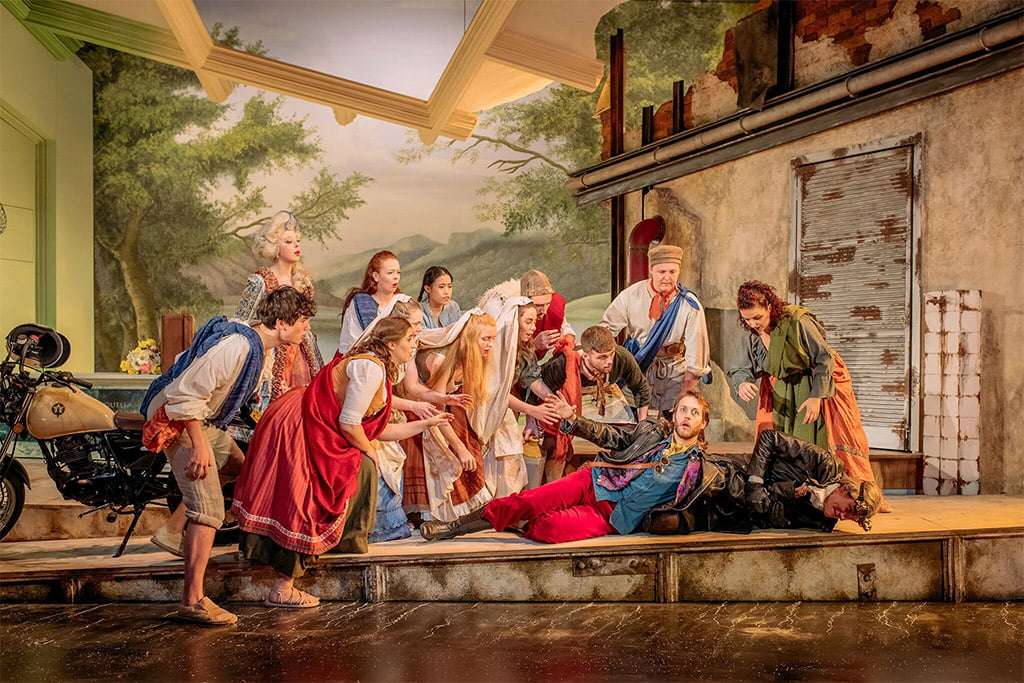 In Haydn’s La fedeltà premiata (Fidelity Rewarded, premiered at Esterháza in 1781) a curse lies over Arcadia, because the heart from a statue of the Diana has been stolen from it. Peace will only be restored if somebody willingly offers him or herself to a vengeful sea monster (realised here as a huge, vicious octopus whose tentacles sometimes terrorise the scene). In the meantime, a pair of faithful lovers must be sacrificed to it annually in order to appease the goddess’s wrath. In his programme note, Stephen Barlow mischievously comments that he did not want to draw any parallels in his production with the implacable curse that presently besets the politics of the United Kingdom. The curtain showing a London Tube sign marked ‘Arcadia’, and a placard with the politically suggestive slogan ‘Revoke the curse’ brandished in the first scene imply that we are, in fact, entitled to make some connections.

The point is not pressed further explicitly, however, which is a pity as that might have made an even more persuasive case for reviving this rarely produced Haydn opera (with its entertaining, if contorted plot revolving around the shifting amorous relations among no fewer than seven characters) as well as offering a wry comment on the present political situation. As it is, no Tory Prime Ministers are harmed in the making of this production and a happy denouement, which has so far eluded any recent holders of the office, takes the form in the opera of an intervention by Diana, who lifts the curse just as Fileno prepares to sacrifice himself, with no more damage done to the characters than some loss of honour and dignity along the course of the drama. Real life outside the theatre also awaits its counterpart to the opera’s symbolic restoration of Diana’s heart, and the punishment of the deceitful high priest, Melibeo, whose tricks have partly driven the unhappy sequence of events which upset the comfortable lives of the Arcadians. 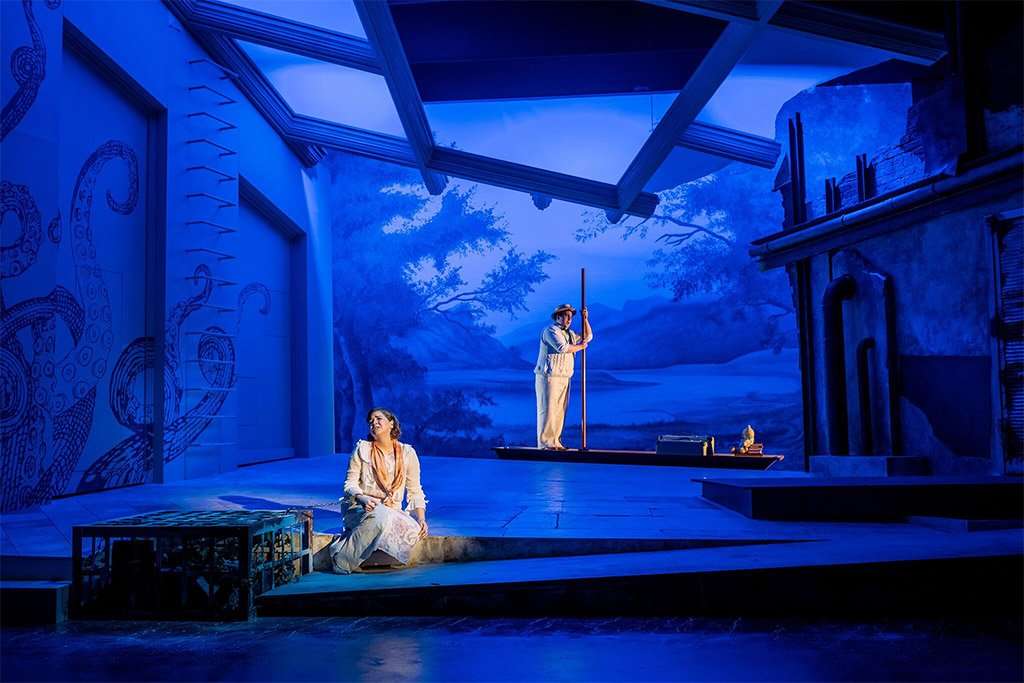 Adrian Linford’s designs essentially conjure an Arcadian idyll, with a Poussin-like landscape as the backdrop, and a Classical-style structure on one side. To the other is a dilapidated façade, suggesting a modern industrial slum, but that contrast is not really pursued – the latter opens later to reveal a wood panelled shack or bar, with a boar’s head, gesturing to the hunt which is given in celebration of Diana. The intermeshing of ancient and modern is mirrored in the appearance of some characters in contemporary, as opposed to 18th century, costume, including the raffish Count Perruchetto, who makes his first entrance on a motorbike. Otherwise, dramaturgically, little comes of this contrast.

The female singers in this performance are generally more assured than their male colleagues, ranging from Eline Vandenheede’s haughtily aristocratic Amaranta, Lara Marie Müller’s coquettish Nerina, Ema Nikolovska’s noble Celia, to Siân Dicker’s imperious Diana. Adam Maxey’s Melibeo is deeply and slyly authoritative, but Robert Lewis and Damian Arnold sound a little raw and strained, rather than securely serene and mellifluous as the lovers Fileno and Lindoro respectively. Matthew Palmer is a confident Perruchetto, though lacks a little roguish panache that would have made the role more truly idiosyncratic.Mian Shahmir Samee appears on stage, in character, Orpheus-like, to perform the flute solos in those arias which call for that instrument, to provide some musical enchantment amidst the busy goings-on.

Alice Farnham directs the Guildhall Orchestra and Chorus in a performance that teems with enthusiasm and energy, if somewhat imprecise in ensemble and tone at times, though their vigour impels the symphonic variety of Haydn’s score. It may not quite be Mozart – what is? – but notwithstanding that Gluck’s operatic reforms are not fully subsumed in this opera, the inspired craftsmanship of the music and its responsiveness to the dramatic situations charted make this a worthwhile endeavour, surely arousing the curiosity of those with any interest in the late 18th century operatic scene beyond Mozart.