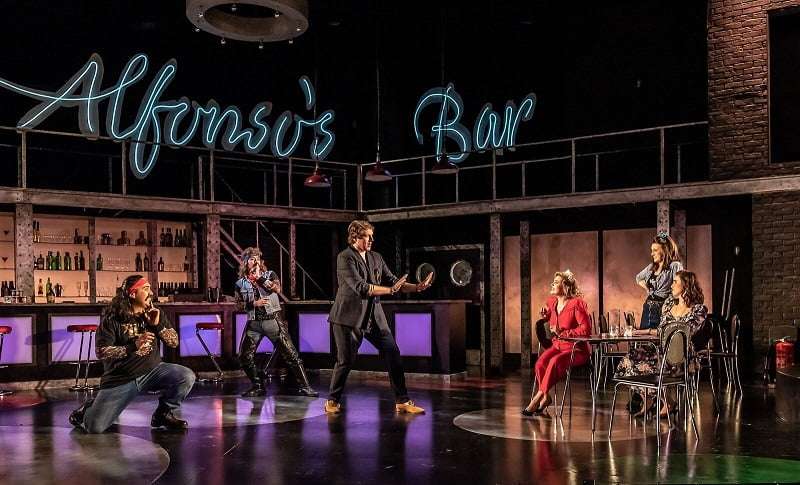 There is almost too much talent to be spotted in this Così fan tutte from the Guildhall School of Music & Drama Opera Course, some of the cast (with a second line-up taking over two of the four performances) familiar from GSMD operas earlier this year, all six names here working as effectively in ensembles as in solo work. Guglielmo and Ferrando, the two men in Mozart’s and Da Ponte’s pitiless exposé of the supposed fickleness of young love are played by New Zealanders Benson Wilson and Filipe Manu in a sharply directed appraisal of the boundaries of male friendship, while vocally both singers are ideally suited. The physically slighter Manu has ringing tenor ardour and sweetness to spare, and the bluffer, more imposing Wilson has a baritone that radiates seduction and self-confidence – and when, in Act Two, emotional territory is trampled underfoot, both singers play out the pain of fiancée-swapping confusion with great poignancy.

If anything, Oliver Platt – who has already shown off his considerable Così form in his Opera Holland Park staging this summer – directs the two sisters with an even surer hand. For a start, Alexandra Lowe and Carmen Artaza could actually be sisters in their easy rapport, led by Lowe’s Fiordiligi who wears the (red) trousers and who takes no prisoners in a stern, endearingly self-righteous ‘Come scoglio’ that exploits the trumpet-like penetration of her voice, which she then softens for a superbly puzzled, unhappy ‘Per pietà’ of tear-jerking directness. Carmen Artaza is a winning Dorabella, who, as she casts off initial shyness, suggests she might anyway be a better fit for Guglielmo as a southern voluptuousness becomes more pronounced in her voice and her acting. Zoe Drummond looks good as Despina, neat, busy but not hyper-active, and her voice combines soubrette panache and personality in equal, agile measure.

Underpinning the intrigue and cynicism is the assured Don Alfonso of the Norwegian bass-baritone Christian Valle. He is the owner of Don Alfonso’s, a retro-1950s’ bar with a tropical theme, where the bet is clinched, cocaine is snorted, the sisters’ hot chocolate is brought in by Despina in modern cups with plastic lids, and a Mariachi band entertains the clientele. At first, I thought we were in the real 1950s, but there are a lot of contemporary points being made. Platt’s reinvention of Guglielmo and Ferrando’s dashing US naval officers as Albanian heavy-metal fashion victims strains credibility – how could the sisters find them remotely appealing? – but they are in-keeping with Platt’s consistently confrontational take on the plot’s very contemporary abuse of the two sisters, leaving us, the jury-audience, in no doubt as to the devastation wreaked by Alfonso’s Pyrrhic victory.

Neil Irish’s designs are pretty frenetic, and you have your work cut out following all of the chorus’s business. Dominic Wheeler occasionally dropped his guard ensemble-wise, but in general he drew spirited playing from the GSMD Orchestra. Having heard many a Così with the continuo as a seventh, wisecracking character, it is here noticeably played down.