With Birmingham Royal Ballet in something of a state of flux at present, it was good to take stock of the current health of the company during its short Sadler’s Wells visit. What emerged was a lively and alert ensemble who dance with engagement and a strong sense of theatre. 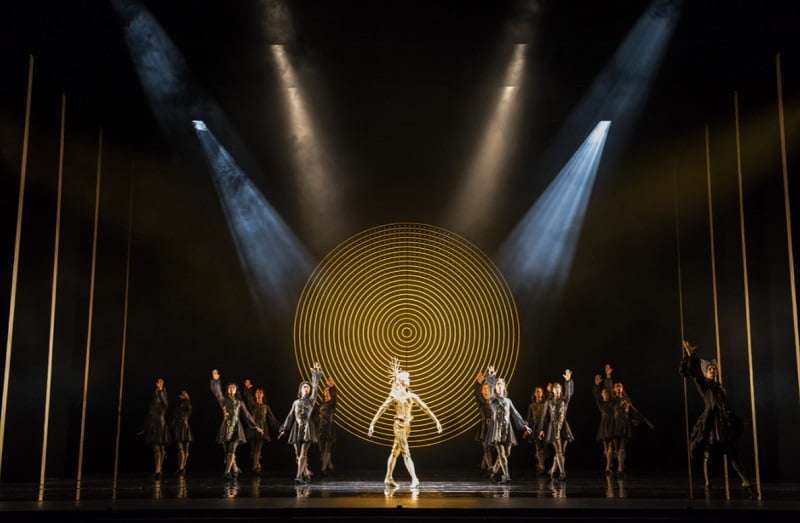 David Bintley’s The King Dances is a quirky work, a modern evocation of the courtly dance style at the time of Louis XIV, the very beginnings of what became ballet. Bintley’s structure comes from the 1653 twelve-hour Le Ballet de la nuit in which the adolescent Louis himself appeared as the sun. Extravagantly baroque costuming, the use of flaming brands and dramatic lighting makes this work a visual treat, even one is not always quite sure of what is going on. The final tableau of Louis clad head to toe in glittering gold, Mazarin announcing the king, the court in obeisance and the brass of the orchestra at full pelt is a powerful ending to an always-intriguing work. Max Maslen was a suitably gilded young Louis, eloquent in the ‘sleep’ section in which he is supported and borne aloft by the men of the company. Tyrone Singleton was a particularly strong Mazarin/La Nuit who relished his orchestration of the terrors of the night before the rising of Louis’s sun. Stephen Montague’s commissioned score plays intelligently with seventeenth century sonorities and forms while remaining resolutely contemporary – the Royal Ballet Sinfonia sounded as if they were enjoying playing it.

In strange scheduling, The King Dances appeared with only one other work, Ignite, a new creation by Juanjo Arqués. It is a disappointment, a confused jumble which claims to be inspired by J. M. W. Turner’s 1834 painting The Burning of the Houses of Lords and Commons, and sets dancers as not only flames but also water, sky and such abstract concepts as ignition. The stage is dominated by elevated mirrored panels, a resolutely abstract sight, and costumes are in greys over which dancers wear fluttering silk over-shirts in reds, oranges and yellows, presumably to evoke fire. There is a lot of coming and going, entrances and exits for the large cast, much running around and several ensemble pile-ups. The movement palette is loosely neo-classical with women on pointe, but only loosely, Arqués picking a bit of one style and a little of another. Mathias Dingman is set off on leaps, spins and sundry technical fireworks whenever on the stage, while the Ignition trio engage in some lively interplay. The central calm section starts promisingly enough with female dancers peacefully bouréeing across the stage, before poor Delia Mathews embarks on a duet with Dingman which contrives to be deeply unflattering to her, comprising, as it does, of a sequence of some of the ugliest movements imaginable. It is neither interesting nor beautiful. Ignite is, alas, yet another of those dance works which, without copious explanation as to what it all means, remains utterly unintelligible to the spectator. It comes and goes to Kate Whitley’s busy and over-enthusiastic score, and its passing is not mourned.

La Fille mal gardée forms part of this company’s artistic DNA, having been danced by it since 1962. It is illuminating that, with such a long performing tradition, differences of emphasis and, indeed, steps have established themselves when compared with The Royal Ballet’s. Both, of course, are equally valid.

Certainly, the performance seen went off at a lick (thanks in part to Paul Murphy’s sprightly tempos which chivvy on the action and ensure real impetus to the dancing). There is perhaps a degree of over-familiarity with the work which leads to some members of the corps de ballet not giving due attention to Ashton’s choreography; it must be danced idiomatically by all. No complaints about the principals, who were bright and engaged, delivering truly enjoyable performances even if none could lay claim to being a Ashtonian stylist. Principal Samara Downs is a characterful Lise – no milksop she – who shows she will turn into something like her mother in later years. She dances with verve, even if the filigree steps the part contains are not always perfectly executed. Similarly, it would be hard not to enjoy Yasuo Atsuji’s Colas even if his portrayal of the young farmer is rarely anything other than one-dimensional. Atsuji is a fearless dancer, going hell for leather, even if not everything comes off, and an attentive partner for Downs. Much praise for Tzu-Chao Chou’s goofy Alain who brings a strong technical ability to the simpleton’s gauche choreography. He was genuinely funny in the part, no mean achievement given that many a dancer fails to raise a smile, let alone a laugh. Company stalwart Kit Holder was an accomplished widow, perhaps a little broader in comedy than some, but, nonetheless, secure in the acting, comedic and dancing challenges the role poses. And then there is Ashton’s perfect choreography to enjoy; Fille is a true masterpiece, and when performed, we can sit back and enjoy the astonishing artistry of its master creator.