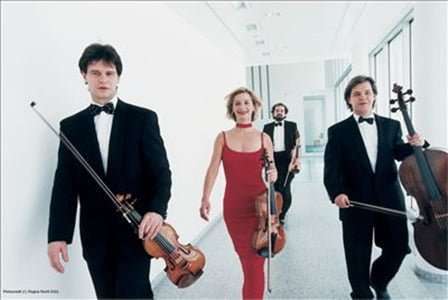 This recital was the second of six in the Hagen Quartet’s Beethoven cycle at the 92nd Street Y. The ensemble was founded in Salzburg in 1981 by four Hagen siblings, three of whom are still members. Rainer Schmidt took over Angelika Hagen’s second-violin chair in 1987. They have been performing worldwide Beethoven’s complete string quartets over the last eighteen months.

When quartet musicians undertake a Beethoven cycle, they face difficult decisions of performing order. In the opening recital, the Hagen members began with the first and last string quartets followed by ‘Razumovsky’ No.1 (from Opus 59), all in F major. This second concert covered much less ground chronologically, comprising works composed within a ten-year span and offering some insights into two important points in Beethoven’s development as a composer. The last of the Opus 18 set, published in 1801, contains intimations of the greater depth and maturity that would emerge in the three ‘Razumovsky’ quartets some five years later, and although Beethoven abandoned the string quartet genre for more than a dozen years after the ‘Harp’ and ‘Serioso’, those works – and especially the latter – also foreshadow the greater complexity and profundity of the ‘late’ works of the mid-1820s.

The Hagen members played with fine technique and an intuitive sense of ensemble, not surprising given the current members’ longevity and their present immersion in this music. Each of the works played here were given a solid, though not groundbreaking performance and Schmidt’s violin was at times overshadowed by the other players.

In the concentrated ‘Serioso’, the players admirably contrasted the first movement’s fiery unison phrase with the lyrical theme with which it alternates, and there was also pleasing contrast between the contemplative Allegretto and the scherzo-like Allegro assai vivace movements. The transition from Larghetto to Allegretto agitato in the finale was brought off smoothly, the brilliant coda taken at a feverish pace, ending with a delightful flourish. In Opus 74, the pizzicato passages in the opening movement that give the score its ‘Harp’ sobriquet were carried off with aplomb, and the inventive variations of the final movement were played with élan.

Although the B flat String Quartet was not the last composed of the Opus 18 group, Beethoven published it thus, perhaps reflecting his conviction that it was the farthest advanced of them all. This is most evident in the opening of the finale, which although Beethoven titled it ‘La malinconia’, feels more mysterious than sad. The musicians observed Beethoven’s instruction to play it “with the greatest possible delicacy”, and then summoned up a brighter spirit for the dance-like section that follows. After some struggles between these two states, it was the latter that emerged in speeded-up fashion to bring the evening to a charming ending.