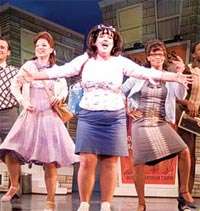 Most of John Waters’s films are considered to be subversive, although “Hairspray” is the least sensational and in fact a very worthy and morally upright tale about teenager Tracy Turnblad’s ability to turn a bigoted community into a caring one. Waters’s method of casting his films is nothing if not original. In the 1988 film of “Hairspray” he used transvestite actor Divine to play Tracy’s mother Edna, plus Deborah Harry, Sonny Bono and Pia Zadora. He is generally not averse to casting his films with cult performers from the fringes of society or the entertainment world, as he did in “Cry Baby” (his next film to be turned into a stage musical) when he used rock-legend Iggy Pop and 1960s’ movie-star Troy Donahue alongside porn star Traci Lords, former Warhol performer Joe Dallesandro and long-time Waters favourite Mink Stole.

“Hairspray” – the musical – was recently filmed with John Travolta playing the outsize, all-American, washerwoman, mom figure of Edna Turnblad (“I’m just an ordinary housewife with indeterminate girth”). A man has always played the role of Edna. Somehow it defuses any accusations that Waters is being ‘fattist’ or anti-female. The original creation by Divine (a.k.a. Harris Glenn Milstead, a childhood friend of John Waters who grew up in Baltimore where the show is set in 1962) was an inspired choice. As played by Michael Ball in the London production of the musical, it appears to be just as inspirational and the role of Edna could well be the part of his musical career. He seems to fit it so well, and there is no feeling that this is an actor slumming it in a drag part. It’s not panto, it’s so much more real than that, being more akin to the role of that other legendary Edna, the Australian Dame, although without the essential caricature element inherent in ‘her’ make-up.

Michael Ball really makes the most of his chances and turns what could have been just a music-hall turn into something truly comic yet also affectionate and touching. His ‘Timeless to me’ duet with Mel Smith as husband Wilbur shows the emotion that the musical of “La Cage aux Folles” sadly lacked. 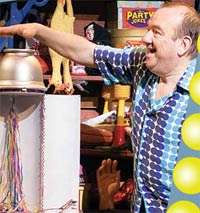 Waters’s original concept has been adapted for the stage to become a dance musical. This fits in well with the plot about the ‘pleasantly plump’ teenager Tracy trying to get on a TV dance-show, but finding that black people are excluded. Without being heavy about it, the show satirises US television of the time and the people running it. Tracy inevitably wins the day, gets her heartthrob passion Link Larkin and gets to hear it for the larger-than-life members of society. And to think it is all based on a real-life incident that occurred on US TV in 1963.

In Leanne Jones the West End has a new star (it’s her first professional job) as Tracy, who sings, acts and dances up a storm, while Ben James-Ellis as Link finally gets a starring role (he was on the TV audition show for “Joseph…”). Tracie Bennett does a superb comic turn as the ghastly TV producer Velma Von Tussle, with Rachel Wooding as her equally ghastly daughter Amber who is fighting Tracy for the love of Link, and Johnnie Fiori plays a big black ‘momma’ figure, Motormouth Maybelle, with great gusto.

The whole show is such a likeable gas after all the recent apologies for good musicals, that it brings a refreshing lift to what had become a rather mundane genre. The energetic cast throws itself into the melee with what is palpably real enjoyment, a quality that comes over to the audience who will inevitably make this one run and run.

The only curious thing about it is why has it taken five years to reach London? It’s the best West End musical since “The Producers”.