Mahler
Symphony No.2 in C-minor (Resurrection)

Reviewed from live BBC Radio 3 broadcast… Although Mahler Symphonies (and Shostakovich’s) are now everyday – especially their respective Fifths – and to their detriment, I thought I’d give Mark Elder’s Hallé ‘Resurrection’ Symphony a go. Glad I did, as an escape, and to stimulate the little grey cells. 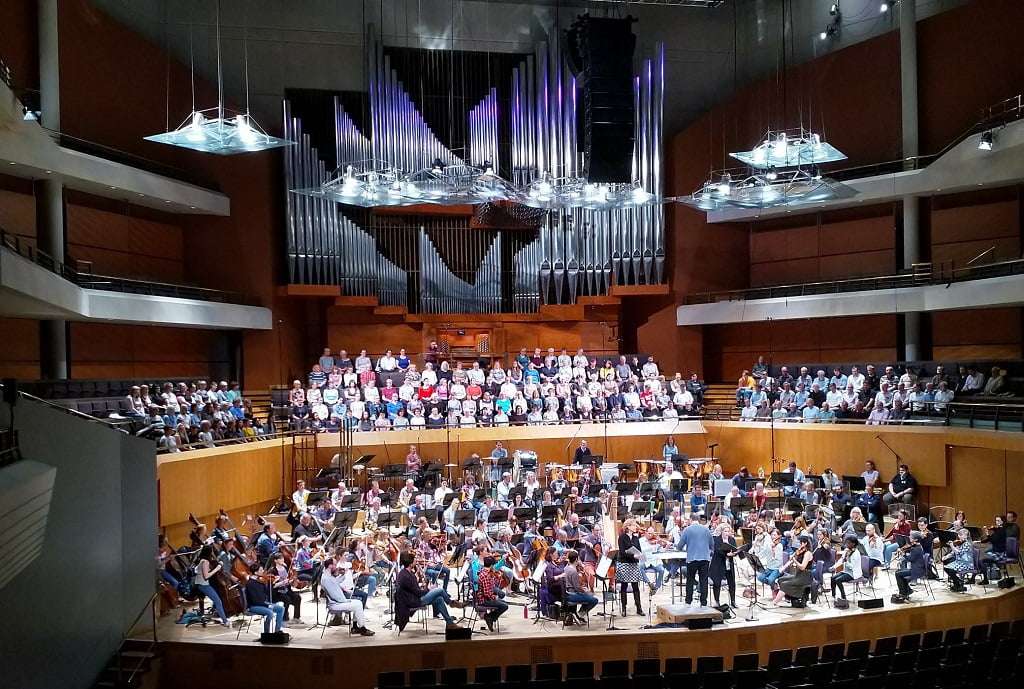 From Manchester, over the airwaves, notes hung in the air with significance from the off, indicative of the long voyage to be undertaken, and – one anticipated – something saved for the choral apotheosis.

There have though been fierier/more-theatrical accounts of the first movement, but Elder and the Hallé found a compelling tension throughout that was dynamic and expressive – well-prepared – climaxes charted towards with certainty and away with connections in place – a little too polite at times, yes, but we were in the same piece; after all, this is a Symphony, if not here as Worldly as it can be, so far. There was generally excellent playing, mind, as well as alert and articulate attention to dynamics and line; and equally fine broadcast sound, spacious and clear, antiphonal violins clearly delineated, off-stage effects (Finale, horns from afar, brass and percussion in the distance) given fidelity to the location.

A shame about the mood-busting clapping that welcomed the solo singers during the couple of minutes break. But, if the opening movement was somewhat short on danger and cataclysm, the remaining four movements went splendidly, and attacca.

Elder found an ideal forward-moving tempo and lightness of touch for the Ländler, nipping, tucking, sweetening and roughening it, delaying the final two pizzicatos to have them mirrored by the timpani opening the appropriately swirling third movement, as St Anthony addresses the fishes, peasantry in attendance, dancing on the riverbank. Something more tumultuous was probably needed on the way to ‘Urlicht’, which found Alice Coote solemnly seeking relief for the woes of Man, Hallé brass immaculate in the dignified ceremonial that ripostes the singer’s opening gambit … and then we crashed into the slow-burn, eruptive Finale; Mahler’s scene-setting held the attention and those two earth-to-sky crescendos didn’t disappoint, cueing a perfectly-paced (nicht schnell) march-past. Bit-by-bit Mahler’s grand design and Elder’s far-reaching conducting were finding epic accord, a clearing of darkness, light being emitted.

The chorus’s first entry is pianissimo and a cappella; it took a little while for the Hallé Choir to settle, and Anne Schwanewilms wasn’t entirely blended, but the bigger picture is that we were all in it together, whether in the Hall or remote from it, journeying to radiant and triumphant salvation, symphony as opera, white doves in flight, the Choir (to words by Klopstock then Mahler) at its happiest at raising the roof (if slightly delayed by an Elder-ism), the conductor going for a broad approach, bells to the fore, organ nicely audible.

A few reservations aside, there was something strangely alluring about this performance, it was certainly therapeutic – and that includes this impromptu attempt at writing it up. Hallé 18-19 ended rejoicing.

But, we weren’t done, for Mark Elder then made a touching speech in honour of leader Lyn Fletcher whose final Hallé concert this was, following twenty-plus years. And, believe it or not, Elder then conducted Vaughan Williams’s Serenade to Music (originally saluting Henry Wood, text from Shakespeare’s Merchant of Venice) in its chorus and orchestra version: rather more than an encore, it’s a substantial and wonderful masterpiece, here a rapt corollary to the Mahler.

I was (again) not entirely convinced by some of the Hallé Choir’s tone but this was a very special performance as a collegiate tribute to a member of the Hallé family, one I was delighted to eavesdrop on, violin solos not least.