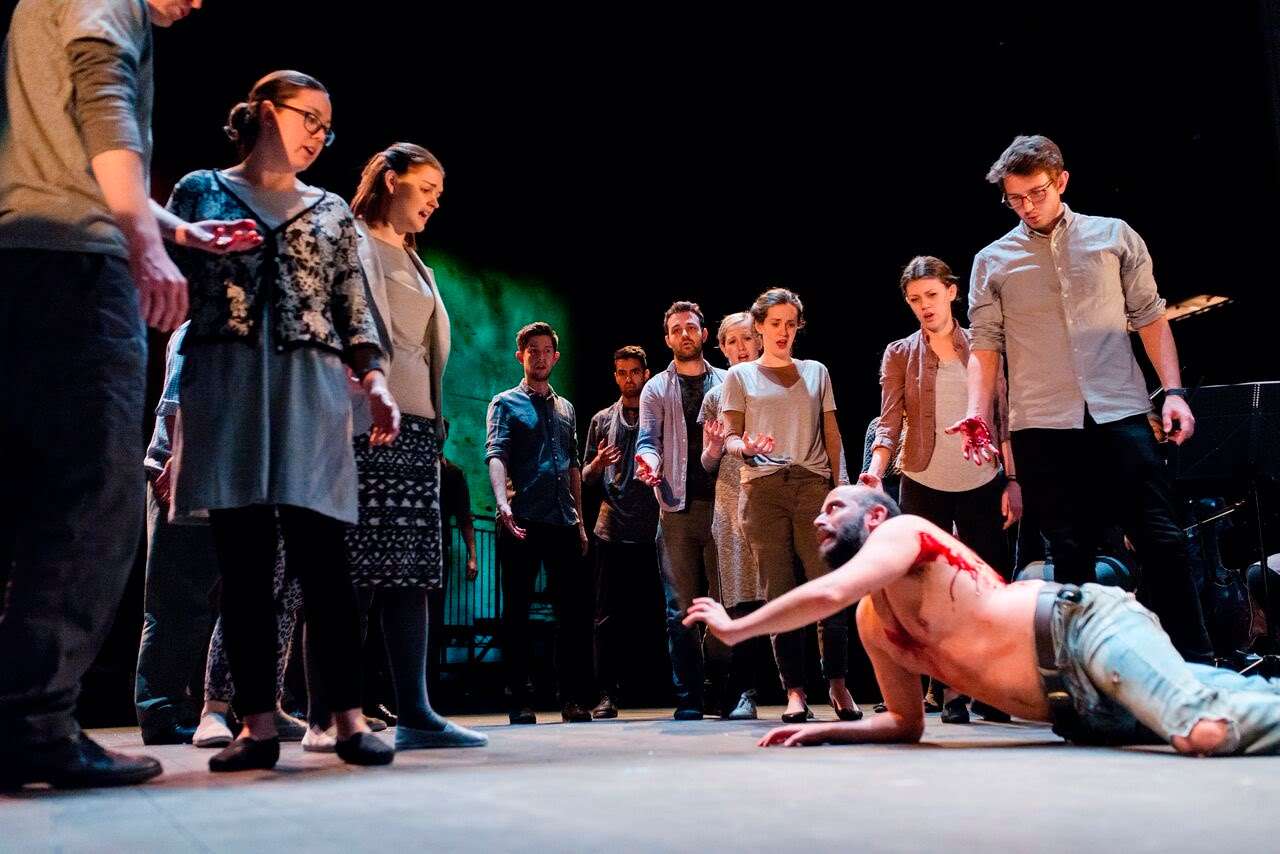 On the cusp of Holy Week, Tom Morris’s semi-staging of Handel’s Messiah was given a welcome revival at the Bristol Proms, having been premiered there in 2013. Its deconstruction of the theology and, to some extent, the music of this perennial work is subsumed into an overall compelling drama that seeks to imagine the response and developing faith of the earliest followers of Christ as they grappled with the meaning of the events surrounding his life and death.

Where Bach’s Passions conflate two dimensions of time with their re-enactments of the trial and death of Christ within the context of the present-day worshipping community, this staging also dramatises Handel’s work, but by complicating the interplay of different layers of time implied by the text. It focuses upon the messianic figure of the ‘Beloved’ who simply lies in a state of death caused by violent execution in Parts One and Three; in Part Two we witness the bloody manner in which the community turn murderously against this outcast figure (who is hoisted up on a noose, in place of a cross, but the effect is the same) after which the crowd come to realise the significance of what they have done.

Part One has the emergent Christian community forming its memory of the prophecies and birth of the Messiah by replaying these events in the present time whilst contemplating their dead body (the non-gender specific pronoun is preferred in view of the alternating cast of male and female actors, and about which no other point seems to be being made other than representing them as, in a sense, a universal figure). After the enactment of the Beloved’s suffering and death in historical time in the Second Part, for Part Three Jessica Murrain again assumed the role of the deceased figure whose spiritual significance for the followers has become clear. 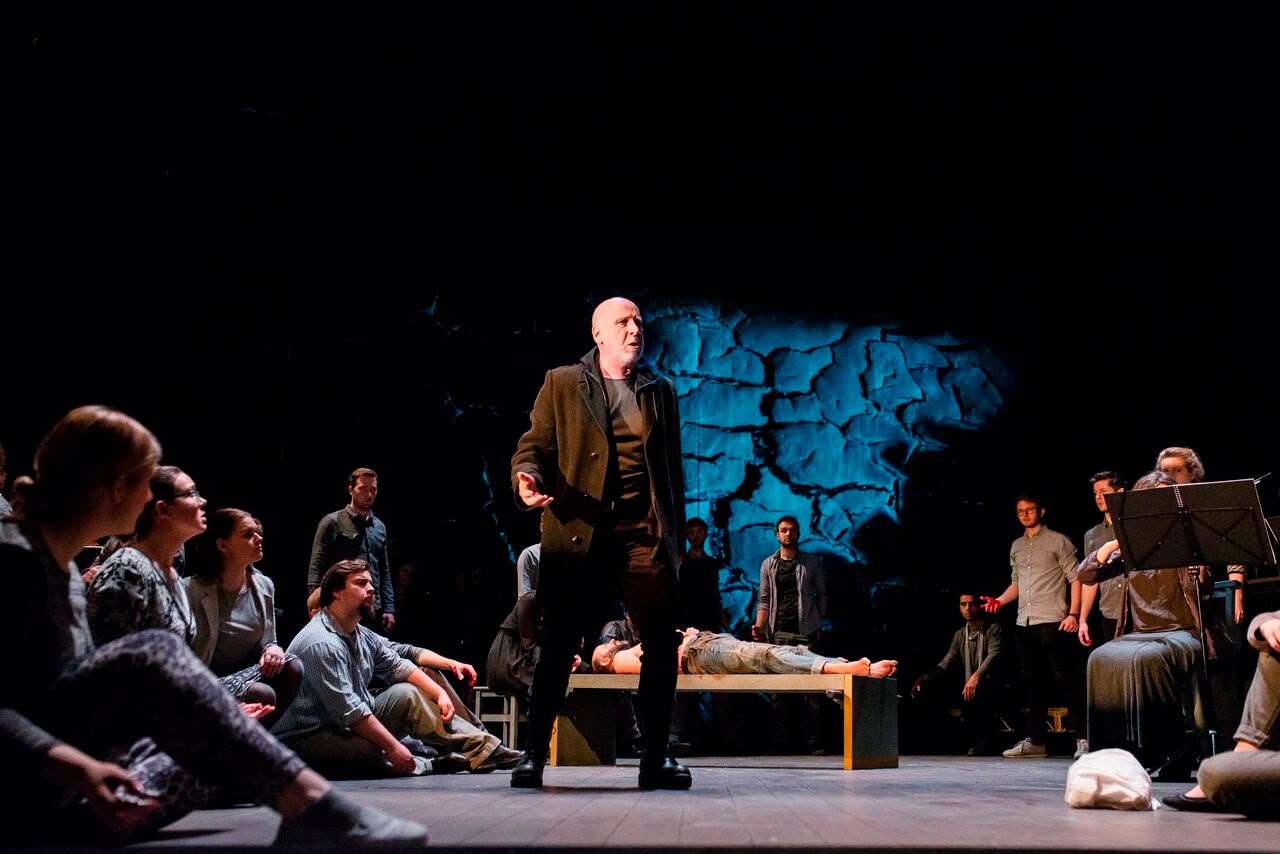 Morris makes a telling dramatic gesture to serve this interpretation by stopping for the interval not at the end of Handel’s Part One, but after the first chorus of the Second Part, ‘Behold the Lamb of God’: the reason surely being that up to that point the Scriptural texts which Charles Jennens selected are generally couched in the present tense, whereas from ‘He was despised’ on the texts switch to the past tense. The adaptability of Handel’s genius was demonstrated as the former, solemn minor-key chorus now ended the first half pregnantly (all the more so for it being a cappella), portending further drama to come and upholding a state of suspense, rather than letting it pause in a mood of comparative anti-climax with the jovial ‘His yoke is easy’ at the end of the largely major-key sequence.

Although the production apparently demythologises the mystery of God become flesh – as thinkers have done since at least Ludwig Feuerbach and, perhaps better-known in English literary culture, as George Eliot did in Silas Marner – by focusing on the outwardly human figure of the Beloved, it otherwise takes seriously the Christian doctrines of the Incarnation and the Atonement since it does not gloss over those sections of the Oratorio which contemplate these tenets.

In Part One the recitative ‘Behold a Virgin shall conceive’ and those re-telling the birth of Christ were charmingly sung by a treble, Cordelia Wood, who was brought on from the stalls as though breaking in from another realm. In Part Two the chorus symbolically enacted the theological idea that mankind’s sins caused the death of Christ or the Beloved, by striking bloody wounds upon them; the chorus’s hands remained soiled until they ritually washed them in the concluding ‘Amen’, the solemnity of which was underlined by a broader speed taken than usual. 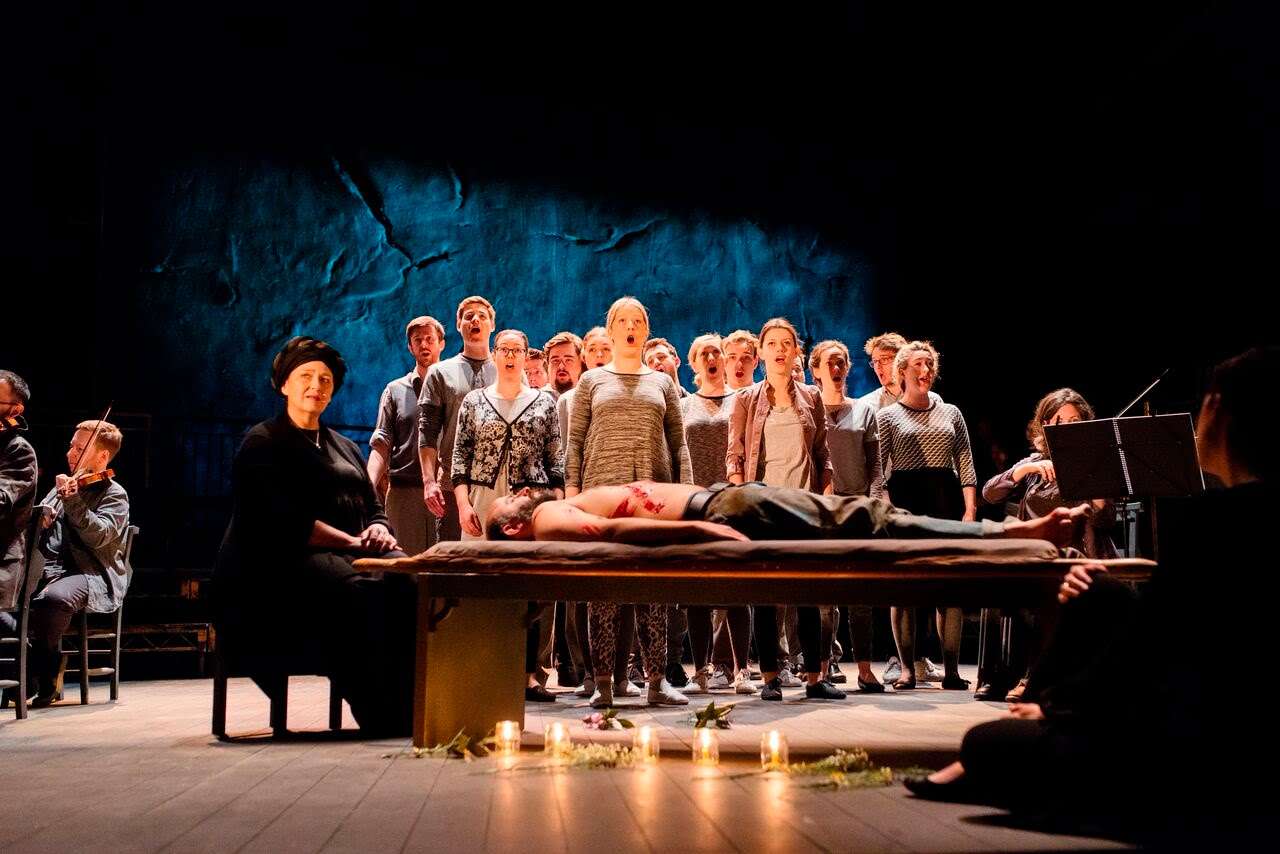 Morris’s vision of the work does justice (as Mel Gibson’s The Passion of the Christ did in cinematic terms) to the remarkable theological leap that was made by the earliest Christian thinkers in associating Jesus, as the Messiah and son of God, with the apparently non-heroic figure of the Suffering Servant encountered in the Old Testament book of Isaiah, which Handel partly set (‘Surely he hath borne our griefs’) and which was performed here by the English Concert so forcefully. The production also avoids anything glib or melodramatic to suggest the Resurrection, but instead has the screen at the back of the stage open up a little in the shape of a cross to flood the auditorium with light. Although there is some merit in cutting some numbers to make for a tauter presentation, it was curious that, given this motif of light, the bass’s recitative and aria ‘The people that walked in darkness’ in Part One had been omitted.

Harry Bicket’s conducting was generally brisk and crisp, serving the needs of this dramatisation well, not least by also linking groups of movements to sustain tension, and highlighting the way in which Handel presumably thought of this Oratorio as a series of dramatic tableaux as in his other Biblical narratives or earlier operas. The orchestra of a little over a dozen members was divided into two parts on either side of the stage, around a harpsichord in each case – the upper instruments with Bicket, and the violas and continuo stationed with another unspecified harpsichordist opposite, with trumpets appearing as necessary. That arrangement brought out the inner detail of the music, particularly the ever-evolving bass line. The modest number of musicians ensured a consistently alert and vigorous account of the music, but they also drew a proper contrast with gentler movements, such as the elegant legato of ‘He shall feed his flock’. 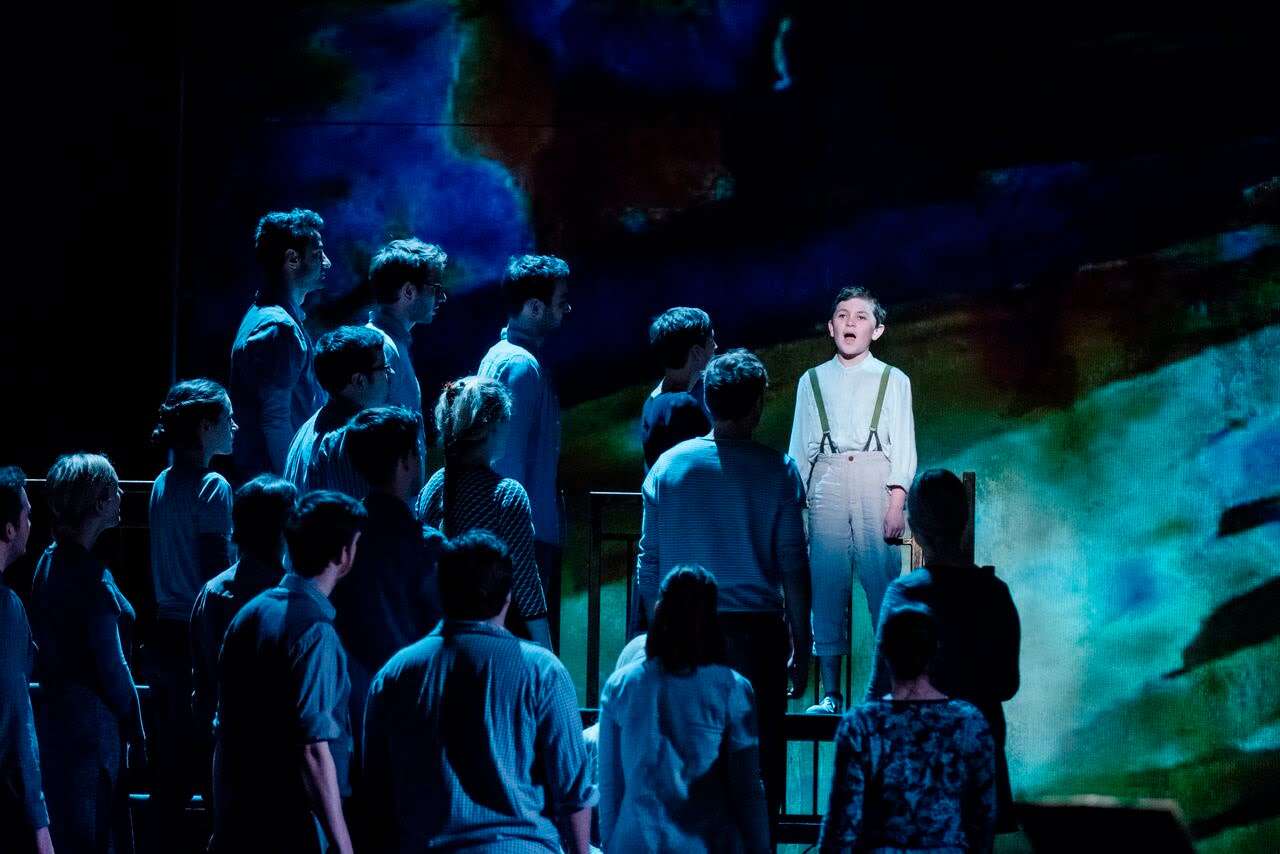 The Erebus Ensemble articulated the words of the choruses well, and precisely delineated the layering of Handel’s contrapuntal textures such as in the separate waves of snide denunciation from the angry crowd in ‘He trusted in God’ and, contrastingly, in the way that the ranks of the choir came forward separately to pay respect to the Beloved in the ‘Amen’ chorus in time with their respective fugal entries, thereby realising latent dramatic effects.

Of the soloists, Joshua Ellicott and Catherine Wyn-Rogers helped to hold the narrative together with their active participation as protagonists – Ellicott as a sort of narrator and Wyn-Rogers leading the mourning. Her ‘He was despised’ was a consummate piece of musical acting, whilst Ellicott invested the tenor role with convincing variety – shifting between declamation and consoling lyricism. Julia Doyle sang the soprano’s music with quiet, tender focus, especially ‘I know that my Redeemer liveth’, and Brindley Sherratt sang solidly but stylishly in the bass numbers.

Overall this is a successful collaboration between theatrical and musical elements in which neither unduly imposes upon the other but serve a thought-provoking realisation of this great work, graphically representing some of the principles of Christian thought and practice which it was Handel and Jennens’s intention to advance. But it is not limited to that as it stands as an essentially intelligible drama in its own right, and could easily and profitably be taken on tour.