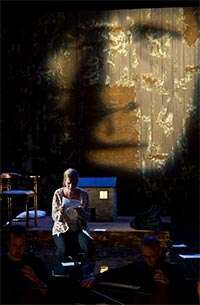 Watkins’s In the Locked Room tells of the bored wife of a banker who develops a fixation with an absent poet, whose room remains empty and locked at a holiday cottage in coastal wilderness. MacCrae’s Ghost Patrol is set in the grittier location of a cheap bar in an army town, and follows the accidental reunion of two former soldiers with a secret between them.

David Harsent’s libretto for In the Locked Room is an unrecognisably modernised re-working of a Thomas Hardy short story and is gothic in tone. Watkins’s score is suitably gothic to match. The curtain lifted to reveal a model house with a single light glowing from an upstairs window. This haunted house remained the dominant image throughout. Britten’s The Turn of the Screw was a constant presence. The score is dominated by modally-inflicted scales and string harmonics. A central, very still aria for the landlady, Susan, made a sister piece for Britten’s governess. The plot also echoes that most famous of horror stories: an isolated country house complete with family secrets; a hysterical, sexually repressed heroine; a threatening, Quint-like male figure in the poet Pascoe, lurking at the back of the stage; even Ella’s city boy husband Stephen made a direct parallel with the egocentric absent owner of Bly.

Despite the familiar ground, the opera felt fresh. Ruby Hughes was instantly likeable and taut as Ella, her singing brisk and clear. Paul Curievici was pleasingly unpleasant as her swaggering financier husband. However, they were let down by direction which seemed at odds with the Victorian gothic of music and words. The action moved too swiftly at the start, so that the relationships between characters seemed false. Personalities marched on and off too often, confusing a sense of time or place. With more sympathetic direction In the Locked Room will make a welcome addition to the repertory. 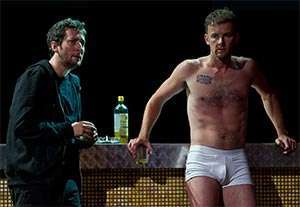 Stuart MacCrae and Louise Welsh’s Ghost Patrol proved a more-even creation, in which words, direction and score always worked together. Snappy video footage and tape effects enhanced the slick production. Former army sergeant Sam, now sleeping rough, unknowingly breaks into the bar of his former commander, Alasdair, and is invited to stay. He is haunted by their shared memories of combat, which his public-school brat of a senior had suppressed. There was genuine camaraderie between the two, and electric hatred by the end.

The casting was excellent, even if James McOran-Campbell was stronger as an actor than as a singer. MacCrae’s music sparkles like broken glass and bubbles like lava. As the tension mounted, clarinets screamed high in their registers. He matched Welsh’s claustrophobic fascination with the horrors of war, through militaristic effects from the percussion. Although more successful as an entity than In the Locked Room, Ghost Patrol poses more challenges to audiences. MacCrae’s music is far more ‘difficult’ than that of Watkins, often discordant and sometimes unpleasant, intentionally so. Sam’s night of terror, complete with taped voices and newsreel footage, was genuinely, deliciously terrifying.

Both operas suffered from uneven pacing – 50 minutes is neither long enough to develop a full story, nor short enough for a few scenes. The performances were always competent and often moving, in particular Nicholas Sharratt’s scared army officer. The star of the evening was the Music Theatre Wales Ensemble, tackling two very different scores with great dexterity.