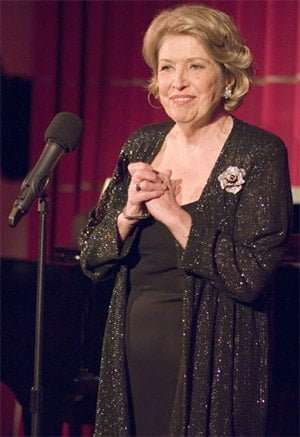 Members of audiences tend to remember performers from their last appearances; in which case Anne Reid will currently be recalled opposite Derek Jacobi in the BAFTA award-winning TV series Last Tango in Halifax. However, having been an actress all her working life she has a great deal of experience on which to draw for her cabaret act at The Crazy Coqs. Introducing Reid, Ruth Leon, guardian of the talent at Sherwood Street, recalled earlier days at Granada Television when Anne played Valerie, Ken Barlow’s first wife in Coronation Street. The actress went on to greater things in the theatre, on television and in films, recalls Leon, whereas she, a lowly figure at Granada, ended up running a nightclub! Well, they are back together at The Crazy Coqs. In fact Reid is returning to the Coqs by public demand, so all those, like me, who missed her debut can catch up with a quite astonishing performance. Mostly known for dramatic roles in the theatre, Reid admits that she really loves comedy. Victoria Wood encouraged Reid in comedy on television with Dinnerladies, although early on she had worked with Tony Hancock and Benny Hill. However, most of Reid’s TV work has been in drama such as Doctor Who, Peak Practice, Midsomer Murders, and Poirot. As a film actress she has been in The Mother, Love and Death on Long Island, Liam, and Song for Marion, all dramatic works, and was made an MBE in 2010.

Reid wishes she had done cabaret thirty years ago; unfortunately (or fortunately for her) all those acting parts got in the way. She started life training to be a ballet dancer but that didn’t work. A devotee of Hollywood movies, she liked the idea of a glamorous life as an actress, perhaps even working with her favourite actor, William Holden. In her act she has a fund of hilarious theatrical stories, most of which she tells against herself. In fact the act is a stand-up routine with songs. She has matchless timing, cueing long and loud laughter. She tells us that she always loved to sing. She is no belter, so don’t go expecting Elaine Paige or Patti LuPone. Instead she has great warmth and the power of her personality shines through. Her diction is perfect and you will hear every syllable.

Her choice of material (with a nice joke about what to wear) is impeccable and includes mostly songs that are seldom heard in cabaret. Reid and Stuart Hutchinson (a fine singer, too) have delved into the musical archives. They have come up with some real corkers, numbers from revues of the 1950s as well as rare Sondheim, some Cole Porter, Cy Coleman, Marvin Hamlisch, Harold Arlen, Richard Rodney Bennett, Rodgers & Hammerstein and even Billy Joel and Don McLean.Opening with a bang is ‘Fit as a fiddle’, memorably sung by Gene Kelly and Donald O’Connor in Singin’ in the Rain, and then in contrast it’s a Sondheim lyric called ‘In no time at all’, cut from Saturday Night. Without sounding mawkish Reid does wonders with love-songs such as Bock & Harnick’s ditty from Fiorello! in which the heroine announces that she will marry ‘The very next man’. Lewine & Horwitt’s ‘Gentleman friend’ is similarly pensive and romantic. The programme has several medleys, coupling together Porter and Sondheim.

Another medley incorporates Joel’s ‘New York state of mind’ with the evocative lyrics of ‘Transatlantic lullaby’ by Diana Morgan and her husband Robert McDermott to a lovely melody by Geoffrey Wright, written for a Gate revue in the 1940s. However, comedy is never far away and Reid excels in numbers such as ‘Robert the robot’, about falling in love with a tin man, written by Charles Zwar and Myles Rudge, or Richard Rodney Bennett’s ‘Let’s go live in the country’ and Sondheim’s ‘Pour le sport’, about a woman’s reluctance to learn how to play golf, written for an unproduced musical called The Last Resorts. Reid asked permission to rewrite Don McLean’s ‘Addicted to black’. He gave her carte blanche – and it’s a treat.

The show closes with ‘The road you didn’t take’ from Sondheim’s Follies, ‘A cockeyed optimist’ from Rodgers & Hammerstein’s South Pacific and as an encore ‘More I cannot wish you’ from Frank Loesser’s Guys and Dolls. This is a great show that ought to be recorded. It, like Anne Reid herself, is something worth preserving. She is a national treasure.