Philip Glass
In the Penal Colony – Libretto by Rudolph Wurlitzer, based on the original story by Franz Kafka [UK premiere] 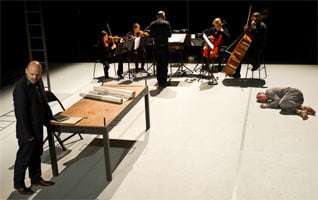 Dating from 2000, “In the Penal Colony”, a one-act opera of some 80 minutes’ duration is on a chamber-scale; there being only two singing characters and the accompaniment provided by a string quintet. It did not strike me, frankly, as one of Philip Glass’s more inventive works; in fact, there were several hallmarks which were (all-too?) familiar from other pieces, right from the opening when an oscillating two-note figure sets the score in motion.

The fundamental problem is that music, libretto and action really seemed mismatched. Whilst largely in a dolorous minor mode (though incongruously ending with some perfunctory major chords – was some kind of irony intended?), the music seems oddly genial set against the pretty horrific nature of the story.

This may be easily summarised: A Visitor arrives to an unnamed island location to witness the execution of The Condemned Man – a silent yet touchingly pitiful portrayal by Gerald Tyler. The Officer is a supporter of the ‘old ways’ and “the old Commander” – indeed he reveres the latter – and wants to see traditions upheld. These include horrendous torture methods including death via the use of a harrow. The Condemned Man is released. The Officer subjects himself to a gruesome demise. 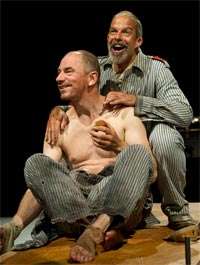 Whilst obviously symbolic in character (and surely applicable to several current situations), there is material here for a grisly opera in true Grand Guignol style. Unfortunately, Glass provides an often gentle accompaniment to declamatory vocal lines which do not serve to illuminate either the characters or their motivations. To be sure the music underlines the action but does not drive it forward or illustrate it in conventional operatic terms. Maybe that is the point, but when the dreadful deployment of the harrow is described, mere string octaves seem simply inadequate as underpinning to the verbal description.

In my ignorance of agricultural machinery, I had not fully realised what a harrow is, nor that it can be deployed as an instrument of torture. As there were several portentous references to it, enunciated with acute vividness by Omar Ebrahim, it was a little frustrating not to be aware of the fact that it has metallic teeth attached to a frame. In this opera – at least as it was staged within the confines of the Linbury Theatre and its ‘open’ stage – a prisoner is tied on to a table face-down and the harrow is then lowered onto his back. In this hideous climax to the opera, blood spurted realistically from The Officer’s back, whilst Glass’s arpeggios continued implacably on.

In some respects the staging is not faithful to the libretto and stage-directions. For instance, another silent character – The Soldier, whose duties are to supervise The Condemned Man’s every move – is omitted.

Omar Ebrahim was centre-stage for the majority of the time, and his declarations were imperious and fanatical – even if it was difficult to discern quite what this character’s motivations ultimately were. Tenor Michael Bennett was sometimes able to do little more than look perplexed and sound anxious. One or two outbursts verismo-like in nature seemed out of place.

Michael Rafferty conducted efficiently – though in such a small space I wondered by it was necessary to have five monitors broadcasting his every movement. The string ensemble played immaculately, but one really wanted greater variety of texture and dynamics. Much of the time, the music was delivered at an unvarying mezzo-forte though, to be fair, I do not know what indications – if any – are given in the score.

A thought-provoking story – needless to say, given its original author – but operatic Glass really works best on an epic scale; one which “In the Penal Colony” does not aspire to.