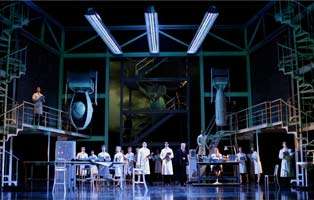 That the Faust legend has continued to evolve on the operatic stage (extending from Louis Spohr’s often literal version, created when Goethe was very much alive, to Pascal Dusapin’s ironic debunking of the redemption concept staged just three years ago) means that its past adaptations can all too easily betray their era. None more so than Gounod’s “Faust” – first staged in Paris in 1859 (in London four years later) and quite probably the most frequently revived opera during the next half-century. While its composer’s reputation had fallen away prior to the First World War, the opera maintained a hold on the repertoire until the mid-twentieth-century and has shown signs of recovering some of its popularity – if not its former eminence – this last decade. The underlying problem being that Gounod’s pathos-laden retelling of (only the initial stages of) Part One of Goethe’s drama is relatively removed from Faust as the existential Everyman such as latter-day commentators might prefer him to be.

Which is what Des McAnuff seemed to be attempting in this new staging for English National Opera. With metal stairwells and walkways that could have been remaindered from that of John Adams’s “Doctor Atomic”, and the framing presentation of the eponymous anti-hero as an aging and disillusioned scientist partaking of both Einstein and Teller in a way redolent of ENO’s famous staging of Busoni’s “Doktor Faust”, the stage was set for a production of the most trenchant revisionism. The more surprising, then, when later scenes take-in soldiers in Great War uniforms and women in Edwardian garb – the setting retreating towards something more recognisably of the opera’s cultural milieu. Add to these a music-hall treatment of the waltz scene, the emergence of the cross as charismatic rallying-point and the angels as white-coated lab assistants, and McAnuff throws up a sizable number of temporal and aesthetic layers that could conceivably have coalesced into a vivid if unsubtle reinterpretation. 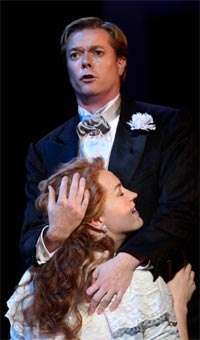 Almost inevitably, though, it failed to do so – not least because stereotypically ‘nuclear’ imagery and post-modern irony are as far removed from Gounod’s bourgeois sentimentality as his opera is from the would-be-transcendent speculation of Goethe’s drama. Not that this often crude and unfocused mishmash is without its successes: Peter Mumford’s lighting often draws one’s attention from the general and social to the specific and personal with understated rightness, while Dustin O’Neill’s video backdrops – though hardly a novelty in present-day theatre – are an effective visual counterpoint to the scene-setting interludes. Yet the fact remains that if Gounod’s “Faust” remains an opera of its era, it is one embodying that era’s convictions and uncertainties like few others. Take these out of the equation, however, and one is left with a vehicle for warmly emotive singing and music whose melodic content is undoubted if restricted next to numerous operas before and after – most pointedly, Bizet’s “Carmen”. 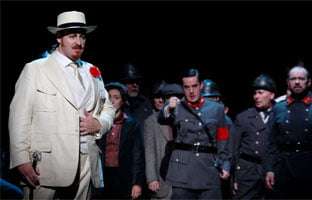 Vocally, the cast is good if not outstanding. A borne recitalist, Toby Spence has previously seemed less at ease on the operatic stage but his ardent and impulsive showing as Faust – less a blackguard than a serial prevaricator only too willing to entrust his decisions to others – is a sympathetic and believable one. If there is a failing, it was that he seemed too callow to have tempted Marguerite into parting with her virginity – in which part Melody Moore was rarely less than secure if just a little ordinary. Moreover, hers is a role that needs to grow in conviction as it comes to the fore in the later stages; the fight for her soul locking her into a battle with Mephistopheles in which, on this showing at least, she had little chance of winning. That said, Iain Paterson’s debonair image and suave manner for the latter were not inappropriate, but this least vehement of baritones was rarely threatening.

As to the secondary roles, Benedict Nelson had the requisite eloquence for Valentin but his lack of flexibility in the vocal line made his part seem more two-dimensional than it should be, while his death-bed curse was simply over-emphatic. Adrian Powter was a generous spirited Wagner, and Pamela Helen Stephen made the most of her fetching cameo as Martha in an assumption that made for a genuine lighting of mood. In terms of casting, though, Anna Grevelius stole the show (albeit briefly) – in the ‘trouser role’ of Siebel – her vivacity and poise indicative of a singer who will surely go on to far more significant achievements before too long. The ENO Chorus got off to a scrappy start with its poorly coordinated singing in Act Two, but the ‘Soldiers’ Chorus’ was nothing if not rousing and the scenes on Walpurgis Night brought an expressive unanimity that helped compensate for the lacklustre staging.

For his part, Edward Gardner was evidently intent in building on successes he and the ENO Orchestra have achieved these past seasons. Whether or not he has conducted “Faust” on previous occasions, his feeling for Gounod’s idiom was undoubted as was his maintaining of dramatic tension across and between each act. Perhaps the waltz music in Act Two could have evinced more of a lilt rather than being merely incisive, while the ‘love scene’ in Act Three took time to get into its stride (as, indeed, do Faust and Marguerite), but the confrontational final stages had no mean dramatic impact. Gardner chose to omit the ballet from Act Five: while not extraneous in terms of the theatrical context, this remains supplementary and was hardly missed. Nor was an absence of spoken dialogue, though a rather self-conscious handling of recitative tended to impede the dramatic flow at certain junctures.

Whatever else, “Faust” is a ‘stage opera’ of the first rank and Gardner ensured much of that dramatic potency came over. Vocal shortcomings may well be overcome over the run of performances, though whether the production gradually becomes more apposite to Gounod’s vision seems unlikely at best.