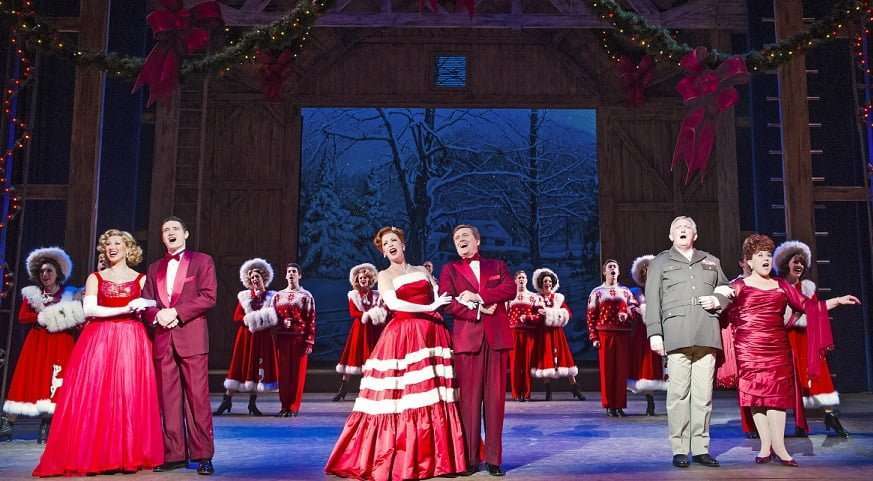 The popular White Christmas film of 1954 that is a regular on television has been turned into a rousing, jolly and melodious show that may not have the priceless talents of Bing Crosby, Danny Kaye, Vera-Ellen and Rosemary Clooney (hard acts to follow), but in some ways improves upon the movie, about which there are several misconceptions. It is constantly described as a re-make of Holiday Inn, from 1942, which also has a score by Irving Berlin and spawned the song, ‘White Christmas’. It is not, and all it has in common with the earlier film is Berlin as songwriter and the setting of an inn. And though it was a box-office hit, it fared poorly with critics, who found it trite, clichéd and embarrassingly sentimental in its icky storyline about a lovable General who has fallen on hard times.

This stage version, though its libretto is not sparkling, gets the plot out of the way as often as possible to make room for scintillating song and dance. Two cringe-inducing numbers, ‘What can you do with a General?’ and ‘We’ll follow the old man’ still remain.

The show begins, like the Paramount film, in 1944, with an army unit celebrating the holiday and being beguiled by ‘White Christmas’, nicely rendered by Aled Jones. No surprise that he should sing so pleasingly, but his co-star Tom Chambers also has a melodious voice and Jones handles his share of the dancing with aplomb. What a rare pleasure to witness a musical in which dancing has a lion’s share of the whole plus a rich menu of songs. 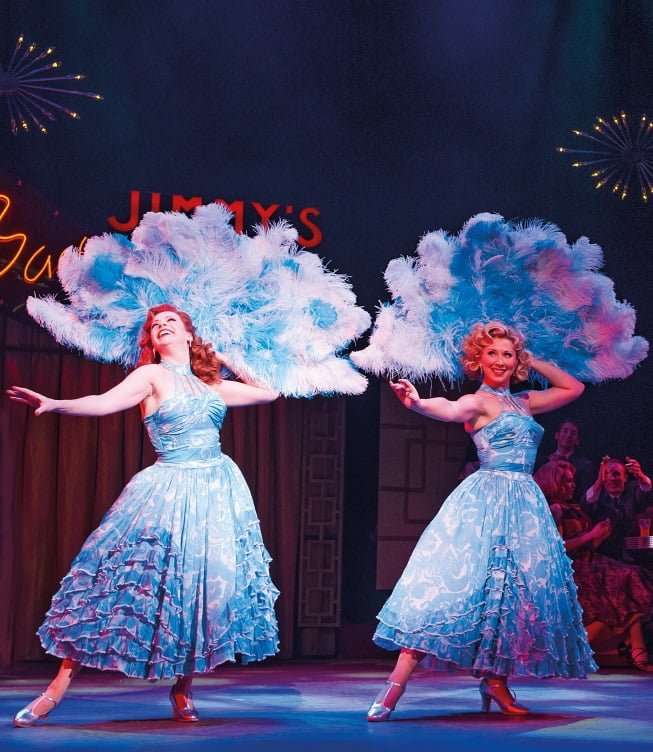 After the wartime opening things move briskly to 1954, when our heroes have become luminaries and lead the talented company in a terrific, toe-tapping version of ‘Let yourself go’, a Berlin standard that has been added. Four songs from the film have been dropped, the ‘modern dance’ pastiche, ‘Choreography’, plus ‘Mandy’, ‘Gee, I wish I was back in the Army’, and an instrumental version of ‘Abraham’. Seven have been added, including two Berlin rarities which it is a pleasure to hear.

Berlin dug one of the film’s hit numbers out of his trunk when he converted a patriotic ditty, ‘Free’ (which had been cut from Call Me Madam) into ‘Snow’, which here builds most effectively to a rousing choral arrangement. The sisters who are the love interest for the stars are played by Rachel Stanley and Louise Borden, a little brassier than their screen counterparts, but the latter partners Chambers beautifully in a captivating ‘The best things happen while you’re dancing’, and the former duets nicely with Jones for ‘Count your blessings’.

The character of the inn housekeeper, Mary Wickes in the movie, has been transformed into a prominent player, allowing Wendi Peters to stop the show with her Ethel Merman-style belting of ‘Let me sing and I’m happy’ (though was it really necessary to change “mammy’s arms” into “mother’s arms”? ) Peters later joins Stanley and Borden in a grand version of ‘Falling out of love can be fun’, one of the added rarities, from Miss Liberty, though introducing some plot business near the song’s end is a miscalculation, stifling its momentum.

A similar thing happens when Jones leads the company in an otherwise knockout ‘Blue Skies’, which has the men dressed in white suits and hats and the women in tuxedo jackets, evoking Judy Garland’s legendary black outfit when she sang ‘Get happy’. The backdrop, although feasibly blue and white, is identical to the design for Garland; but then, if you are going to steal, do it from the best! Randy Skinner is responsible for the abundant and festive choreography, no routine finer than for ‘I love a piano’, another setting that is white, a predominant hue in a show that ends with snowflakes raining on the elated audience and to the durable title song.